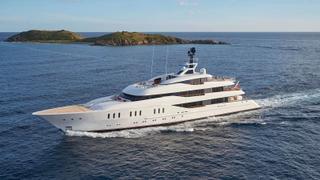 The 66.25 metre motor yacht Vanish, listed for sale by Burgess, has been sold with the buyer and seller represented by Cecil Wright & Partners.

With exterior styling and interior design by Harrison Eidsgaard, Vanish was built in steel and aluminium by Dutch yard Feadship and delivered in 2016 with only private use since. Accommodation in her voluminous interior of 1,481GT is for 14 guests in seven cabins including a full-beam master suite on the bridge deck with a sea balcony. On the main deck are two VIP suites and a further four cabins. All guest cabins have entertainment centres and en suite bathroom facilities while an additional nine cabins sleep 17 crewmembers.

To preserve square footage for both a formal dining room and a spectacular three-storey atrium lobby on the main deck, the designers cleverly took advantage of the yacht’s ample beam and turned the dining room sideways, thus eliminating the hallway effect that athwartships dining rooms typically present.

The sun deck offers an al fresco dining area, one of six on board, a covered gym, lounge, bar and a Jacuzzi spa tub flanked by sun pads. The main helipad is on the foredeck while the aft sun deck has a second helipad for aircraft stowage on passage.