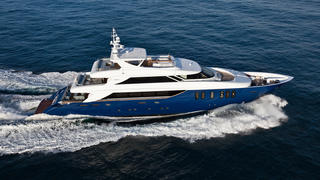 The 45 metre motor yacht Ouranos has been sold with Michel Chryssicopoulos at IYC representing both seller and buyer and has been renamed Ipanemas.

Designed by Luca Dini, she was built in GRP by Italian yard Tecnomar to RINA class and delivered in 2013 as an Admiral model. Extensive accommodation is for up to 14 guests in six cabins consisting of a master suite, VIP suite, two doubles and two twins along with Pullman berths, all with entertainment centres, Samsung flat screen television sets and en suite bathroom facilities. In addition, there are quarters for nine crew in five cabins.

The large saloon has comfortable seating on a range of settees and occasional chairs, a bar and an entertainment centre including a 55 inch Samsung flat screen and a server delivering on demand video and audio throughout the guest areas, along with full WiFi internet access.

Twin MTU 16V 4000 M90 engines give her a cruising speed of 21 knots and a range of 1,500 nautical miles at 11 knots. Inevitably, she is fitted with zero speed stabilisers for added comfort at sea and in port.