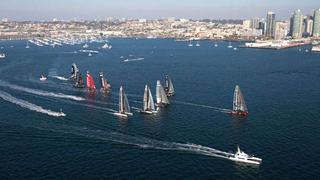 The host city for the 35th America's Cup is being narrowed down, and it was announced today that the island of Bermuda and US city of San Diego, California, have been shortlisted as potential venues for the next America's Cup.

San Franciso, Chicago, Bermuda and San Diego had been in the running to host sailing's biggest event. Chicago now is likely to be a host venue for the America's Cup World Series races, taking place in 2015 and 2016. Meanwhile, last year's America's Cup venue, San Francisco, California, was ruled out quite early, only a week after the 35th America's Cup protocol was announced. Russell Coutts had sent an email to Ed Lee, the mayor of San Francisco, saying, 'Given the tight timeline and demands from perspective teams to confirm the final venue, it has been necessary to continue reducing the shortlist of candidate cities. We have, therefore, taken the difficult decision to no longer consider San Francisco as a possible candidate to host AC35.'

Now Bermuda and San Diego are the contenders to host the Cup, both offering very different benefits. 'Both Bermuda and San Diego have made very compelling cases to be the host for the next America's Cup,' says Coutts, director of the America's Cup Event Authority (ACEA). 'We will be in good hands with either venue. I'm confident that we're on target to finish with a venue that allows us to achieve our goal of hosting an exciting and successful America's Cup built on a strong commercial foundation.'

San Diego is one of only seven cities to have ever hosted the America's Cup, which it did in 1988, 1992 ad 1995. Of course, the format for the Cup has changed since then, and while the race in those years took place far offshore beyond Point Loma, if San Diego were selected today the racing would take place in San Diego Bay itself. Setting the racing within a large harbour such as this would provide an amazing natural theatre offering amazing viewing opportunities for spectators along the city's waterfront, similar to the atmosphere that pervaded San Francisco last year. This would fit the push that ACEA is making to have the event appeal to a wider audience.

On the flip side, Bermuda will be much less accessible to the layman, but an ideal fit for sailing and yachting enthusiasts. Set 640 miles in the Atlantic Ocean off of North Carolina, Bermuda has a long history of hosting races and is a haven for sailors. Racing here would also take place close to shore, within the island's Great Sound.

The ACEA is working with both venues to consider logistical requirements for hosting the event as well as commercial opportunities, and they will announce the host city for 35th America's Cup before the end of 2014.