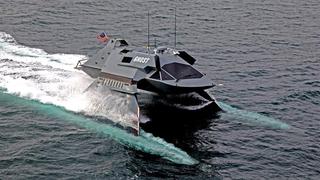 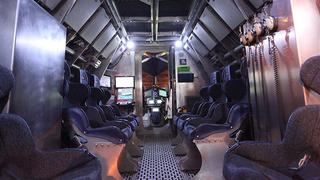 With the latest Star Wars movie hitting the big screen this week, what better time for Berthon to list the $7.5 million tactical stealth boat Ghost. The 11.5 metre futuristic SWATH vessel looks more like a spacecraft than a tactical craft, with a low profile hull and articulated wings.

Ghosts arrival_ _to the market comes at a time when the boating world is being treated to an increasing number of futuristic designs. Examples include the Evo 43 day boat that looks like a Star Wars TIE fighter and the Vanquish VQ50, which features lines like a stealth fighter jet.

Juliet Marine Systems, a marine technology company in New Hampshire, built the catamaran in 2009. It was aiming to provide a fast and ultra-stable patrol vessel to be used for fleet defense, anti-piracy and law enforcement.

Powered by twin Lycoming T53 gas turbines with 2000 horsepower each, Ghost is capable of reaching 30 knots in any conditions. The articulated wings keep her 14 passengers flying comfortably above the waves.

When she was launched Gregory Sancoff, the founder of Juliet Marine, said “it’s such a smooth ride, you can sit there and drink your coffee going through six-foot swells.”

Ghost has a military style low radar signature thanks to her angled hull, which is similar to that of stealth navy ships such as the new Zumwalt Class destroyer.

The SWATH concept has also been adopted by several superyacht designers as they look for new ways to deliver the ideal design. In 2008 Abeking and Rasmussen launched Silver Cloud, the first ever SWATH superyacht. Since then its owners have been able to enjoy being at sea without the problem of seasickness.

Ghost could be $7.5 million well spent, with the owner able to have the unique experience of flying above the waves in a military spec craft . Whoever buys her will certainly get people talking wherever they go.

Could this huge navy destroyer have inspired designs for Motor Yacht A?