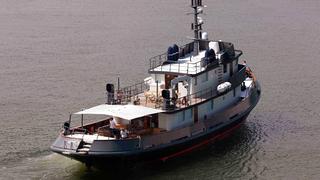 The 30 metre converted tug Vervece has changed central agencies and is now listed for sale by Leo Jordil at IYC in Monaco.

Originally built by Italian yard Benetti in 1964 she was transformed into a luxury yacht by Palumbo in 2013. When she was relaunched by Palumbo the yard described her as “virtually a new build”. Parts of her hull well were changed, a new superstructure was built and the engine room was rebuilt.

This yacht for sale is now powered by twin 1,000hp Cummins engines and has a cruising speed of 12 knots and a range of 3,000 nautical miles at this speed.

Her new modern interior has been designed to provide a “beach house” atmosphere and she offers accommodation for eight guests in four cabins — a master room, VIP stateroom and two twins. All the rooms are en-suite and have 32-inch satellite televisions. An extra guest can also be accommodated with a Pullman and she has three cabins for crew.

Her interior features a spacious saloon, modern, bright galley and rustic dining table. She also has a cosy upper lounge which would be ideal either for those looking for a quiet space during the daytime or for drinks in the evening.

Vervece's design means that she offers a huge amount of space across her three decks. Her extensive deck spaces have made her a popular event charter yacht since her transformation as she is able to accommodate up to 100 guests at the quayside.