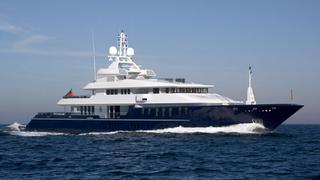 Only seconds apart, I receive emails from Jim Evans at SuperYachtsMonaco and Jamie Edmiston and James Auld at Edmiston & Company of a large €5 million price reduction on their joint listing, the 68m motor yacht Triple Seven.

Delivered in 2006 by Germany’s Nobiskrug yard, this superyacht has had significant upgrades made by her current owner, including a new audio-visual system featuring a 108? plasma screen.