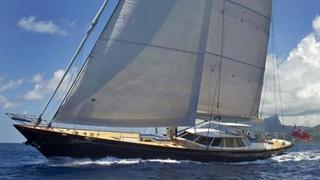 The 41 metre sailing yacht Inmocean has had a central agency change and is now listed for sale by Rytis Babravicius at Ocean Independence.

Built by New Zealand yard Fitzroy Yachts to a design by Dubois Naval Architects, Inmocean was delivered in 2008 as a classic modern sloop. Lloyds classed and MCA compliant, an interior by Adam Lay Studio accommodates six guests in an owner’s suite forward and two twin cabins, all of them with full en suite bathroom facilities. Constructed in aluminium with a carbon fibre rig by Southern Spars, Inmocean was a finalist at the 2009 World Superyacht Awards.

Early in 2014, a four month refit in New Zealand saw her receive a complete topside repaint, new interior upholstery throughout – including wall coverings, carpeting and window treatments – new soft goods, new exterior cushions, full servicing of all machinery including engines and generators, and the deck equipment was serviced where needed.

Under power, a single 600hp Caterpillar engine gives her a cruising speed of 11 knots and Inmocean is asking €7.5 million with tax paid.