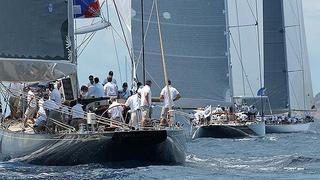 Friday, March 29th saw history made as five J Class yachts lined up for the J Class Race in the Hundred Guinea Cup at the St Barths Bucket 2013.

The start was delayed slightly as the pin end started to drag, proving it is difficult to lay marks in 40m whatever the wind strength. After a quick re-set, at 12.10 the five Js crossed the start line, the first time these boats have lined up together in the Caribbean.

Ranger immediately went hard left, which paid off as she was the first of the fleet to the windward mark.

On rounding, Ranger held the lead, followed by Hanuman and Velsheda on the way to the gate for the first time. It was nip and tuck all the way down and at the gate, the race team signalled a shortened course to 2nm as the wind was now light.

First at the gate was Ranger which rounded the left hand gate mark, closely followed by Hanuman on the right hand mark. Both boats were on starboard with Lionheart hot on their heels on port. She also rounded the starboard mark, with Velsheda immediately behind. Lionheart followed at less than two boat lengths.

On the second beat Ranger again preferred the left hand side, which paid off so well for them last time, while Rainbow went off to the right. Ranger crossed tacks in front of Hanuman with all yachts still very closely matched.

Coming down the run for the second time, all five J class yachts were very close. At the gate, Lionheart, flying a protest flag, had taken a four boat length lead, followed in order by Hanuman, which had a two boat length lead over Ranger, then Rainbow and Velsheda.

The first four chose the right hand mark with only Velsheda deciding to take a flyer and choosing the left hand mark. Lionheart and Ranger tacked onto port soon after the gate but Hanuman kept going on starboard into what looked like lighter air and wind well left. She eventually tacked and got a lifting breeze up the island shore – while the other four all choose to stay offshore.

To counter a windshift, the windward marks were moved for a third time onto a new bearing of 125 degrees from 120, but still 2nm range. Going round the weather mark the third time, Hanuman had a substantial lead followed by Lionheart, Rainbow, Ranger and Velsheda. It was all on for the last leg.