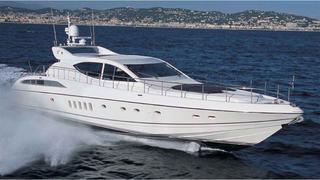 The 24 metre Leopard motor yacht Delta Bravo has been sold with Philippe Chadel at Yachtside in Monaco acting for the buyer and seller.

Built in GRP by Italian yard Arno to a design by Andrea Bacigalupo, she was delivered in 2006 as one of the yard's Leopard 24 series. A clean, uncluttered interior in satin-finished cherry wood with holly inlays accommodates six guests in two double cabins and a twin, including a master suite in the bow, all with television screens, DVD systems and full en suite facilities.

Delta Bravo features an expansive main deck saloon incorporating a lounge area and bar along with comfortable seating on large settees to port and starboard. There is also a state of the art entertainment centre including a large flat screen television while forward is a dining area. Al fresco cocktails and casual dining are available on the aft deck featuring a large sunbathing area that converts into a dining space seating eight guests, making it the perfect space to relax with friends or family while under way, watching the Mediterranean coast slide by.

This area also has overhead lighting and cocktail tables to port and starboard, both with large tops to make dining easier, and there is a full wet bar and an entertainment centre including a television screen on a rise and fall mechanism. There is a further private sunbathing area located on the foredeck with an optional Bimini top.

Twin 1,500hp MTU engines linked to KaMeWa water jets give her a cruising speed of 27 knots.