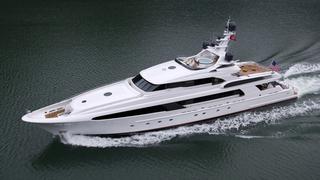 A call to Kevin Merrigan at Northrop & Johnson brings great news as he tells me that he acted for the buyer and seller of the 46.94m motor yacht Mr Terrible.

Built by Delta Marine in 2007, Mr Terrible is ABS classed and MCA compliant. Her interior by Adriel Rollins mixes Polynesian and Art Deco themes and won him the 2008 World Superyacht Awards Newcomer of the Year for its scope and detail. The yacht accommodates up to 12 guests in a master suite and four cabins.

Mr Terrible was featured in the 2008 edition of The Megayachts and also won an award for Best Semi-Displacement motor yacht over 40m at the 2008 World Superyacht Awards.

Says Kevin, 'This spectacular yacht went to a great buyer and, now renamed Usher, will remain for charter with Northrop & Johnson.'