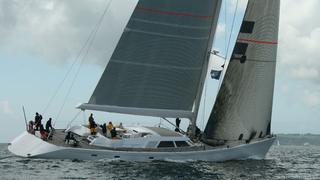 'A wonderful day, beautiful weather, Falmouth at its best,' was how Firebrand owner Ed Dubois described Wednesday’s racing in the Pendennis Cup. No rain, occasional glimpses of sunshine and a predominantly south-westerly force three to four resulted in smiling faces all round in Falmouth yesterday evening.

The start of the race was delayed after the wind shifted during the countdown process. 'It was a lot lighter at first and further left than the forecast so we went into a short postponement to let it settle a little bit,' says race officer Peter Craig. But the race soon got underway with Class 2’s staggered starts and a one and a half mile beat towards the Manacles.

This was followed by two long downwind legs during which Mariette, which had started first, 'got stuck in a light patch off St Anthony’s while the rest of the boats followed a line of pressure down,' says Tim Tregear, Pendennis Shipyard’s Palma manager who was sailing on board the Herreshoff schooner. A four mile (mostly port tack) beat followed, and then two tight reaches to the finish.

For the second day running, Unfurled got line honours but this time she was far enough ahead to win on corrected time as well. 'Unfurled sailed a phenomenal race,' adds Tregear, 'she was blistering'. Once again Adela was second over the line and on handicap, although just 26 seconds separated her corrected time from Mariette’s in fourth, with the Bill Lee-designed 21 metre sloop Breakaway between them in third.

Class 3 was set a course which allowed more opportunities to fly spinnakers than in Tuesday’s race. On board Firebrand we went one better getting line honours just ahead of Tomahawk, and also winning on corrected time with *Mikado *second.

'This is a disparate group of boats,' says Craig, 'and we’re looking to give them a variety over the four days so that it’s not the type of courses which are laid that determines who wins the regatta. We were trying to get a little a little more upwind and a little more dead downwind today.'