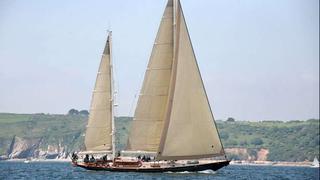 For a long time, it looked as if Saturday’s final race in the Pendennis Cup might not take place.

Throughout the morning there was barely a breath of wind in Falmouth Bay and the Race Officer, Peter Craig, was very mindful that the race had to finish in time for the fleet to anchor and enjoy a Red Arrows aerobatic display. But barely 10 minutes before Craig’s self-imposed deadline for making a final decision, a line of wind appeared across the Bay, and the starting procedure got under way. Craig had to set particularly small courses for both classes, however, and even those had to be shortened as the wind showed signs of dropping again.

Starting second in the Pendennis Division’s staggered start sequence, 26m Velacarina soon overtook 25m Kelpie of Falmouth on the first leg to windward, and kept the lead on the two subsequent reaches, the second of which was particularly tight. She also won on handicap – by more than five minutes in a race lasting barely an hour – and this gave her the series win.

‘We managed to hold our spinnaker for the entire last leg which some of the other boats didn’t do,’ says Velacarina’s captain Steven Plews, ‘and that is what actually sealed our victory’.

The owner of 42m Mariette and Kelpie of Falmouth decided to race on his smaller gaff schooner – newly restored and without a rig just two weeks ago - for the very first time and she was second, her best result of the regatta.

In the Little Dennis Division, Ed Dubois’ 13.1m Firebrand completed a clean sweep of line honours, but failed to save her time on Nick Offord’s Holman 43 13.1m Cerinthe. With identical series results the two boats could only be separated on the ‘last race’ count-back rule –the very rule by which Firebrand won the series in 2012 – and this gave Cerinthe overall victory.

At the evening’s lavish awards ceremony at Falmouth’s Princess Pavilions. Plews tells me that he had spoken to Velacarina’s absent owner Terence Mordaunt. ‘He congratulated us for the fantastic job. I said to him that "I’m really sorry but we have covered your boat in champagne," and he said not to worry as it’s not the first time that has happened!’