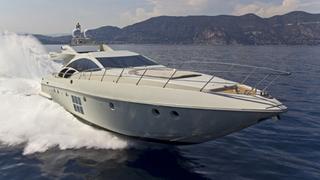 Vesa Kaukonen at K&K Superyachts tells me of a price reduction on his central listing, the 26.21m motor yacht Nami, by an owner who's keen to see her sold before the end of September.

Built by Azimut in 2007, Nami has a fresh, modern interior accommodating eight guests in two double and two twin staterooms while twin 2000hp MTU engines give her a cruising speed of 39 knots and maximum speed of 46 knots.

She had a major exterior and interior refit in 2011.