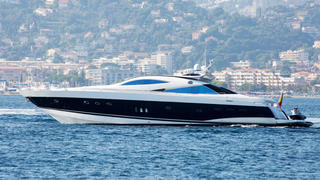 The 29.9 metre motor yacht Sirius of Man has been sold with Rob Dolling of Verpeka Dolling acting for both buyer and seller.

Built in GRP by UK yard Sunseeker International to a design by Don Shead, she was delivered in 2002 with a refit in 2009 including new teak decks and a hull and superstructure repaint. A modern, light filled interior by designer Ken Freivokh accommodates eight guests in four cabins consisting of a master suite, VIP and two twins, all with entertainment centres, television screens and en suite bathroom facilities. In addition, there are quarters for three crew.

The wide saloon has a U-shaped settee to starboard with armchairs to port plus a bar and a music centre forward including a large screen television and a Bose stereo surround sound system.

The aft deck comes complete with built in upholstered bench seating to port and starboard, freestanding tables, an ice maker and grill, making it the ideal location for al fresco entertaining and dining. In addition, generous side decks lead to a foredeck with huge sun pads allowing for sunbathing in complete privacy even when in port.

A planing hull and triple 2,000hp MTU diesel engines coupled to Arneson surface drive propellers power her to speeds of up to 45 knots.