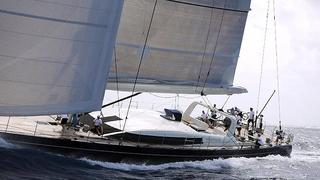 Peter Harrison's 35m ketch, Sojana and Gerhard Andlinger's 37m sloop, P2 have never done battle before in an offshore race. The two magnificent superyachts had a 600-mile match race around the entire course of the RORC Caribbean 600. P2 was the first home by just over 13 minutes in a race lasting over two and a half days. However, Sojana was well over an hour quicker than P2 after time correction.

Commented Marc Fitgerald, skipper of Sojana, ‘We don't often have a match race on Sojana; we try an avoid it to be honest, especially when you are up against someone as good as Peter Holmberg who was at the wheel of P2. However, we ended up with a match race all the way around the course. P2 got away at the start, basically because they were much quicker in the light upwind but we reeled them in on the reach to Barbuda.’

Jonathan Kline, captain of P2 said: ‘Definitely a great battle with Sojana. I think we changed places six times during the race. This was our first offshore race and with the owner on board who is 81, to be able to battle like that around the course and take the finish was a lot of fun for everybody. I think we saw a bit of everything during the race, which made things quite tough.

‘When you look at the course from afar you think that it's going to be 15-20 knots of wind for 72 hours but in fact there were so many different variables; squalls, island lees and everything else, which made it a bit tougher than expected. The variations kept as all awake a lot of the time and we had designed our watch system the way we thought it would be, but most portions of the course required everyone on deck.’

The Royal Ocean Racing Club Caribbean 600 is a 600 nautical mile course which circumnavigates 11 Caribbean islands starting from Fort Charlotte, English Harbour, Antigua and heading north as far as St Martin and south to Guadeloupe taking in Barbuda, Nevis, St Kitts, Saba and St Barth's. Thirty-nine yachts took the start at this year's event, which kicked off on Monday 20 February and will culminate in a prizegiving at Antigua Yacht Club on 24 February.