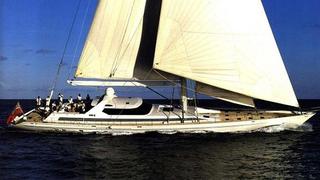 Simon Turner at Northrop & Johnson in Singapore sends news that his colleague Bart Kimman has signed the 37.41m sailing yacht Philkade for sale.

Built to a Dubois design by Sensation Yachts in 1986 as Aquel II, she has seen the world and has a long history of fast ocean passages. Her styling has not aged and she still turns heads wherever she goes. Philkade had an extensive refit in 2009 and is now based in Thailand where she's undergoing further refit work to her decks and interior. However, her owner has had a change of plans and is now offering Philkade for sale in as is, where is, condition.