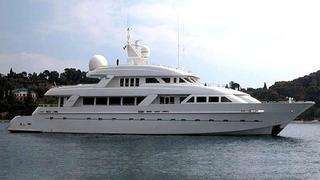 Kent Chamberlain at Chamberlain Yachts writes in to say the latest price reduction on the 44.2m motor yacht Summerwind isn't a typo as the yacht's not had a fire, taken on water or suffered any other calamity.

Built by Cheoy Lee in 1996 to a design by Frank Mulder, this trideck superyacht can accommodate up to 14 guests in six spacious staterooms plus up to 12 crew. Twin 1950hp MTU engines give Summerwind a range of 5,500 nautical miles and Kent says she’s due for an interior refit and major engine overhaul, meaning the owner is very realistic about her current value. Lying in Fort Lauderdale, Summerwind is down from $7.9 million to $4.95 million, as is, where is.