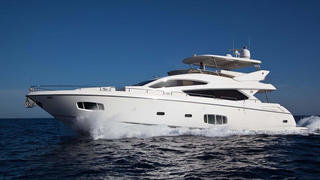 The 24.99 metre motor yacht Alaina, listed for sale by Moran Yacht & Ship, has been sold in an in-house deal

Built in GRP by British yard Sunseeker International, she was delivered in 2003 as a Sunseeker 82 model and carefully maintained since. Accommodation is for eight guests in four cabins consisting of a master suite, VIP suite and two twins, all with entertainment centres, Sony television screens and en suite bathroom facilities. In addition, two crew are accommodated in an en suite twin cabin.

A large saloon has a lounge area with three oyster coloured leather settees arranged around a coffee table, a wine cooler and an entertainment centre including a 40-inch Sony Bravia television screen and a Bose stereo surround sound system. Forward is a formal dining area with black leather chairs seating eight guests while air conditioning has been upgraded to tropical standards throughout the yacht.

The aft deck comes with built in upholstered seating and a table for al fresco entertaining and and dining while up on the flybridge is a twin helm position, barbecue grill, a crane to lift the jet ski, and a seating area protected by a GRP hard top. On the foredeck is a secluded dining area with a table, built in seating and large sun pads. Her top speed is 32 knots and she boasts a maximum cruising range of 300 nautical miles at 25 knots with power coming from two 1,550hp Caterpillar C-30 diesel engines.