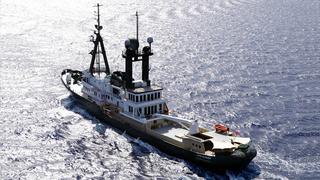 A call to Sales Director Neil Cheston at Y.CO confirms that the 77.73m expedition motor yacht Lone Ranger was sold at her reserve price during last weekend's Prestige Yacht Auction at the Antibes Yacht Show.

Converted from an ocean-going tug in 1994, Lone Ranger has a 31,000 mile range at 12 knots, with Quantum stabilizers (installed in 2004) for greater comfort. In the last decade Lone Ranger has cruised the world several times, including a trip to Antarctica and the Arctic polar ice cap.

Her interior features a large master suite with private owner’s library/study and four spacious guest staterooms, all ensuite. The large open deck space, including a basketball court, swimming pool and helicopter pad, plus her ability to carry a 40’ cabin cruiser and numerous small boats, add to her many amenities.