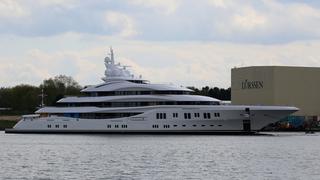 Superyacht market data for April 2015 show some sober numbers but the year’s sales figure so far is still close to the tally for the first four months of 2014, and still beats that figure for the previous five years.

We know of 25 superyacht sales in April, down on 35 in March and equal to monthly superyacht sales data from early in the year. It’s considerably lower than last April’s bumper tally of 46, but in line with the numbers from previous Aprils, from 2009 onwards, which have generally been in the low- to mid-twenties. The largest boat sold this April was 60m motor yacht St David, launched by Benetti in 2008, followed by a 52m, 2012 Sea Axe by Damen. An equal number of the yachts (10 each) were in the 24-30m and 30-40m brackets, with five over 40m.

New superyachts to the brokerage market

Thirty-one superyachts came to the market in April, according to our records, down slightly on 34 in March, but up on the previous April’s 25. The largest was a classic, the 71m Dona Amelia, launched by Germaniawerft in 1929. Next up is 66.4m ISA motor yacht Okto, launched in 2014, followed by 53.6m motor yacht Itasca, launched by J&K Smit in 1961. Ten of the yachts were 20-years old or older, but nine were four years or younger.

There were 10 new superyacht launches in April, according to our sources, compared with nine launches in March and 19 in April last year. The largest was 91m Lürssen motor yacht Orchid, followed by 63.1m Sunrise motor yacht Irimari and 55m Amels hull 468. Five of the boats were Italian and two Dutch.

Seven superyacht deliveries were reported to us in April, only one off March’s eight, but down on the previous April’s 11. The largest was 55m motor yacht AmelsLa Familia, followed by 40.5m motor yacht SunseekerAnya and 36.9m Benetti motor yacht Safad. Only one was a sailing yacht, 28.64m Lady G, built at Southern Wind Shipyard in South Africa. Tow of the count were Taiwanese.

We know of only two new superyacht orders in April, down on eight in March and six in April the previous year. The largest was an 80m motor yacht, due from Icon Yachts in the Netherlands in 2017, the other was a 40m due from Mondo Marine in Italy, the same year.