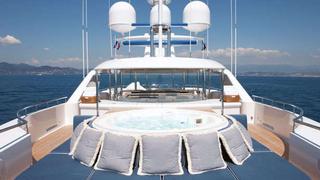 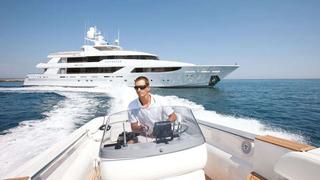 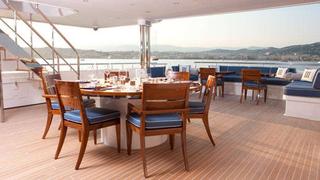 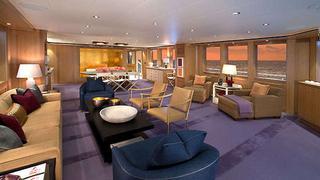 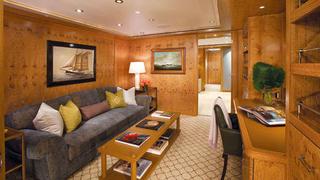 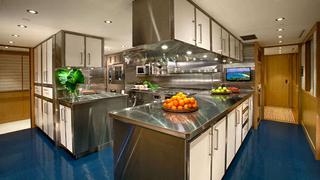 US superyacht yard Westport has no identity crisis. It knows what it is: a production yacht builder. At any one time at the yard’s Hoquiam facility – one of its three shipyards in Washington state – three or four 34m yachts will be lined up next to each other in the shed, each with a board at the stern counting down the number of weeks until launch, splashing at 17-week intervals. And they always launch on schedule, for Westport knows precisely how long it takes to build a yacht: 39 weeks for the 25.9 metres, 60 weeks for the 34 and 40 metres, and 80 weeks for its flagship model, the 50m 164. It is a formula that churns out technically alike yachts on time to the exact contractually-agreed price.

The owners of hull number 10 of the Westport 164 line, the 50m Annastar, know themselves too, and they are not what you would call production people. ‘We’ve never done anything semi-production,’ say the couple, who had Intrepid modify the shade of its ‘Intrepid White’ interior and exterior colour especially for their powerboat.

What attracted Annastar’s owners to Westport was the yard’s reputation and the timeline. ‘We didn’t want to wait five years for a custom build,’ says the wife, half of the ownership couple. They signed the contract on 3 August 2011 and their boat launched on 10 November 2012, despite massive customisation.

That’s one of the main advantages to production building. ‘Technically Westports are almost all identical,’ says company president Daryl Wakefield. ‘The accommodation is where there is a lot of latitude. They all trim and ride properly; they always float right on their lines. Our system is really easy.’

Annastar’s owner’s project manager, Mark Masciarotte, describes Westport’s system as remarkable. ‘It was the easiest build I have ever done. It was also the hardest in that they work so fast. Schedules are tight and accurate. So the decision making process needs to be fast.’

Westport starts a new 164 hull every 26 weeks, sometimes on spec, and these owners stepped in when number 10 was about one-third built as a spec hull, estimates Wakefield, yet the owners were still able to make changes to match their vision.

The standard layout worked for these owners as they were moving up from a 35.7m raised pilothouse Delta yacht and simply needed more space and more beds. Knowing they didn’t have to be involved with engineering and space planning allowed them to focus on the finishes and detail work, and it was here where they challenged the yard to try new ideas suggested by their long-time designer, DD Allen of the New York firm Pierce Allen.

Their chosen principal joinery, cerused oak (a 16th Century finish that once used white lead to fill the grain. Non-toxic coloured waxes are now employed), posed the biggest challenge. The yard had to invent a machine that removed the oak’s soft grain; craftsmen then applied the cerusing and sanded it off, leaving the white oil in just the grain. ‘The result is a traditional honey colour, like teak, but without the darkness and with far more depth and interest,’ says Masciarotte.

The hull’s pure white colour, called Snow White, is a departure from Westport White. The subtle exterior styling changes also add up to a more linear style. Dark metallic-grey paint between the windows creates clean continuous lines along the profile. The curved dip across the aft bulwarks, a characteristic detail of the 164’s exterior, by Don Starkey, is missing on this superyacht hull, replaced with stainless steel railing flanked by straight lines. The rails on the exterior stairways were also redesigned by the couple’s son for a cleaner look.

The owners’ son, who has a talent for engineering, developed hidden hinges for the transom doors that lead to custom stowage lockers for fishing tackle – fishing being the owner’s passion. He also designed aft deck tables on the main and bridge decks that convert from coffee tables to dining tables, and expand to seat 12 by sharing the same curved leaves, thus reducing the storage needs of Annastar.

Inside, Allen worked alongside the owners in creating a colourful, contemporary motif in the spirit of French 1940s interiors. Harnessing the marine environment as inspiration was a conscious decision. ‘It’s a very inside-out yacht – whatever is going on outside can be an extension visually of what is going on inside,’ says the wife. ‘And boats should be like that. They shouldn’t be like houses, they serve a different purpose.’ Thus the prominent colours used on Annastar – blues, beiges and lavenders – blend with the sea, the sand and the sky at sunset.

The main saloon has, ‘an unusual colour palette,’ says Allen. ‘The imported handmade carpets used throughout the boat were a major design statement. This room has a lilac-coloured rug. There is an open plan that’s good for entertaining. We chose not to divide the room with a credenza/television unit and relocated the television.’

To sleep all their extended family, what is typically an exercise room on the lower deck became the fifth guest suite with twin cabins and two Pullman berths. Four of the five guest rooms are on the lower deck, while a generously sized VIP is located on the bridge deck. This suite features private access to a starboard-side terrace, one of the two terraces that flank the upper saloon just aft.

Forward on the main deck, the master suite features dramatic burled oak panelling and furniture softened by the use of grey fabric wall covering. Ahead of the master study and main suite, the bath and dressing areas were redesigned for this hull, offering a more open look to the superyacht.

The galley – designed, as are all Westport 164s, by restaurant design consultant RDS – shows upscale commercial finishes with smart touches, such as cabinet latches designed by Boeing and a worktop warmer that keeps plates hot from underneath rather than via a heat lamp. Conveniently located adjacent to the galley are large walk-in freezers and ample dry storage.

Delivered in 2012, Annastar has hit the mark. ‘A yacht should evoke an emotion when you walk on board. You should feel relaxed, peaceful, serene and at one with your environment,’ says the wife, who is thrilled with the result.

Which goes to show that no matter how a superyacht is born, from a blank sheet or a successful series, all that matters is that the end result works for and pleases the owners.