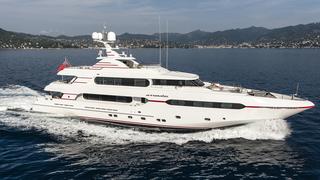 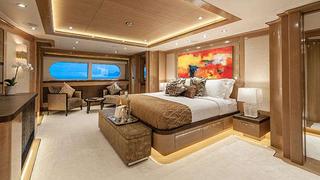 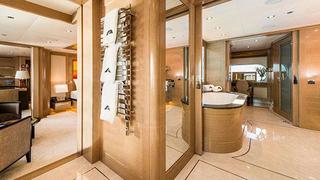 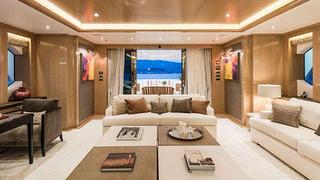 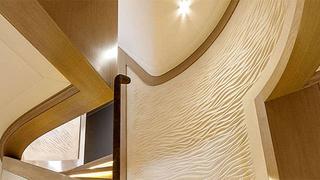 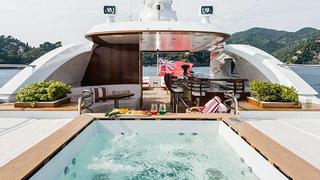 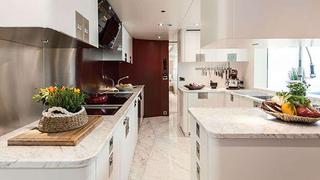 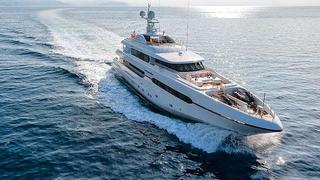 If the owner of the new Sunrise Yachts 45 metre Atomic ever tires of running his successful dive equipment company, there’s doubtless a job waiting for him at MI6.

In a staggering feat of subterfuge, he kept the build of Atomic entirely secret from his family, communicating with the Turkish yard in covert phone calls from his car and hush-hush emails. His cover was eventually blown on a family holiday in Antalya last summer, site of the big reveal. During dinner at a beachside restaurant, Atomic cruised into view, lights blazing. “What do you think of that yacht?” he asked his wife innocently. “Well, it’s yours.”

He kept the secret for 12 months, after signing terms with Sunrise Yachts in July 2013. Atomic – his first superyacht – was started on spec in 2010 as a sistership to Sunrise’s Africa, launched in 2009. The owner became aware of the project and fired off a speculative one-line email to Sunrise’s VP of sales and marketing, Jean-Claude Carme, who responded with the relevant information, not really believing anything would come of it. “I’m glad I answered that email,” he says with a smile as we tour the calm, beachy interior of Atomic at the Fort Lauderdale Boat Show.

Atomic was half finished when the owner bought it, giving Sunrise a challenging 12-month delivery deadline. “A lot was done: the hull, superstructure, fairing, insulation, engines and some systems,” says Carme, “but it was a tight schedule. We had to deliver in summer 2014 to accommodate the owner’s wishes to cruise the eastern Med before bringing the yacht to the US for the Fort Lauderdale show.”

How Atomic's owner shaped her design

The owner got involved in time to tweak Atomic. “He’s an avid scuba diver, so we included mother-of-pearl insets and other marine components to the décor,” says Carme. “The client also decided to turn the garage into a dive centre with extensive sets of equipment, since he tows his tender. The sundeck and foredeck of Atomic have been redesigned as well. Meanwhile, red lines were painted on the yacht to match the décor of his jet, and a clay pigeon-shooting machine was mounted on the sundeck arch.”

Atomic shares exactly the same technical platform as Africa, as well as her Paolo Scanu exterior. And in the case of the engineering set-up, both boats carry the legacy of Sunrise CEO Guillaume Roché’s years as a yacht captain, namely in a superb technical tunnel running the length of the tank deck, connecting fore and aft engineering spaces. This level of crew access is very unusual on a 45 metre yacht, and its benefits are clear in crew miles saved and the ease of communication and diagnosis of issues.

This last job is made much more simple because the whole of Atomic is set up as a kind of Idiot’s Guide. Everywhere you look, hanging off pipes, trunking, engines, and all manner of knobs, wheels and switches are laminated sheets explaining the purpose of that particular item, and where to get spares in case anything should go wrong.

It was important for Atomic’s captain, Marvin Wilson, that everything on board live up to the KISS philosophy: keep it simple, stupid. Wilson was stationed in Turkey to oversee the last 12 months of the build, since to maintain secrecy the American owner couldn’t reasonably keep coming up with excuses to visit the country. In total, Carme says the yacht was in build for 26 months. Despite work starting in 2010, construction was slowed deliberately while he sought an owner and it’s a sign of this young yard’s ambition (Sunrise was established in Antlaya in 2007) that it’s not afraid to invest in spec builds, recognising that a growing number of clients have extreme expectations when it comes to delivery times. “For the client to be able to inspect an actual build rather than starting from a design makes a big difference,” Carme says.

Incorporating the owner's love of the sea with Atomic's interior

The pressure to complete the fit-out of Atomic in 12 months is not apparent anywhere on board. The Franck Darnet interior is very easy on the eye and superbly finished, with headroom particularly impressive throughout. It’s not a moody design, nor massively idiosyncratic, and was partly put together before the owner had bought the boat, but that doesn’t make it any the less appealing. Big points for the French designer, therefore, who “focused on refining the subtle balance between space and materials, to provide a warm and comfortable feeling on board”.

Darnet, also responsible for the interior of Africa, adds: “The owner expressed to us his passion for the sea and for the submarine world. He wanted a certain atmosphere on board: clear, cosy, modern without being cold, elegant with beautiful materials. Those are the key words we used as a basis for our composition.” The light oak theme was an early choice before the owner was involved, and when Darnet presented his renderings after taking the above soundings, the owner said: “That’s perfect, don’t change anything!”

Despite Atomic sliding under the 500GT mark, all spaces on board feel big, which Darnet puts down to his background as a sailing yacht designer: “The optimisation of space is one of our key points; in the world of sailboats, every centimetre matters. We apply the same recipe to a motor yacht, and it’s one of the reasons why, as well as the remarkable height between decks, we have the space worthy of a 50 metre on Atomic.”

The design highlight on board is the wonderfully tactile, sand-ripple staircase wall, which curls with you down to the guest cabins (comprising three doubles and a twin) on the lower deck. It’s never been done on a yacht, Darnet claims, and is therefore loath to divulge his secrets, only saying he worked with a Turkish sculptor to bring it to life. “I’m particularly proud of the result,” he says. “The idea was to reproduce the impression you have in an underwater dive. When you go down a level on the boat, you’re ‘diving under the sea’ in a universe surrounded with sand, and when you rise back up to the main deck, the intensity of the light is stronger. It’s the same when you’re diving.”

Atomic’s layout largely conforms. The expansive main deck is split between a living room and formal dining, ahead of which is access up and down through the decks. The main galley is found here, too, making service to the main guest areas that much simpler. It’s a space clearly set up for use by guests and owner, since it has a domestic finish with plenty of marble and a big window out over the water. The owner’s area forward starts with a nook-cum-study, ahead of which is the full-beam bedroom and bathroom, the design of which reflects the comfortable tones of the main living areas.

The upper saloon really nails the cosy brief and is anchored by a long bar. Light floods in through big windows, and the whole space opens up via large doors onto the aft upper deck, where the formal outside dining is done. Up a level, the sundeck bar is protected by a large hardtop with classy wood surround, while forward is a spa pool. A few clues up here give an insight into the owner’s loves: a big TV sits behind the bar for watching sports, and on the rear of the hardtop a shooting trap sits ready to fling clay pigeons out over the ocean. Down below, with the tender – a 10.3 metre Intrepid – on a long tow out the back, and jet skis on the foredeck, the tender garage has become a fully equipped dive centre.

The owner is due to see some spectacular underwater sites, too, since his vision for the yacht is unequivocal: she’s going around the world, so the tried and tested hull and engineering set-up was a real bonus. “The hull was designed to be particularly effective in all sea conditions,” Carme says, “and most importantly to provide for great fuel efficiency and range with a reasonably sized engine package.” The bright red-painted lumps in the engine room are twin 1,070hp MTUs, offering an easy 12-knot cruise and range of 4,000 nautical miles. The skipper confirms Atomic is a miserly boat, sipping just 150 litres per hour at cruise and 85 litres at 10 knots, and doesn’t ship much water thanks to a pronounced knuckle in its forward sections.

So a supremely comfortable yacht inside and at sea, then, reinforcing Sunrise’s growing reputation as a builder of real pedigree. Turkish yacht building has had its detractors, but if the country keeps producing yachts like Atomic, they’ll soon run out of ammo. Carme says his company spares no expense in bringing in expertise to keep quality levels high, and points to other local yards like Proteksan, RMK and the Turkish arm of Perini Navi. Next down the line for Sunrise is a 63 metre designed by Espen Øino with an interior by Focus Yacht Design, so it’s having no trouble attracting big-name collaborators, either.

But the biggest tick against its work on Atomic is the owner, who is glowing in his praise. He visited the yacht just once during construction, when he signed the contract, so Carme and his colleagues would understandably have been nervous that balmy night in Antalya last summer, as not just the owner’s family, but also the owner himself, stepped on the completed yacht for the first time. But any fears quickly evaporated. “The Sunrise team have built me a masterpiece,” the owner declared. “Atomic will be an awesome floating home, a base for great adventure.”