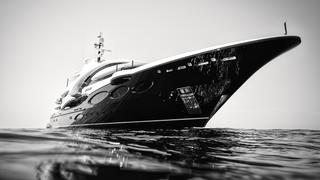 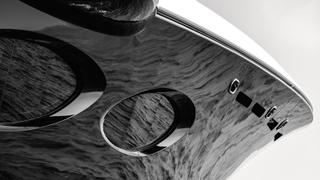 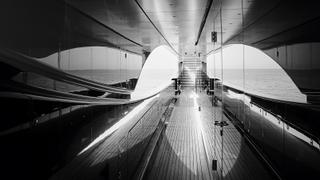 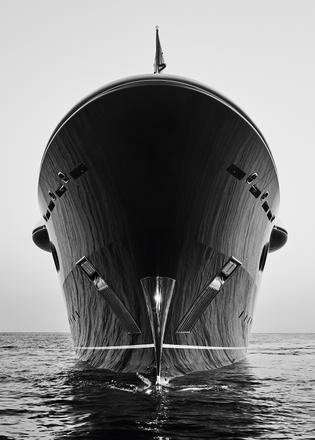 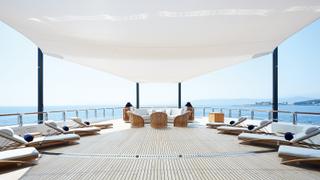 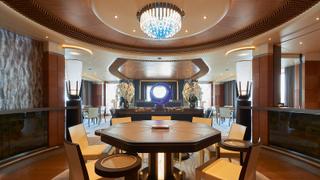 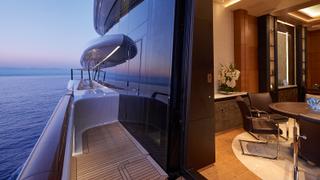 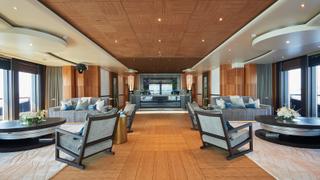 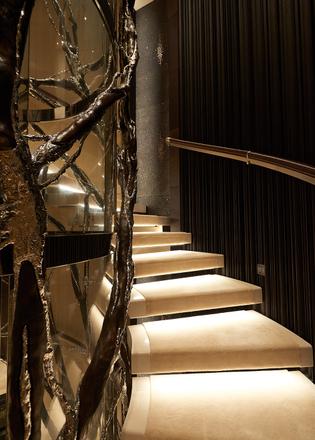 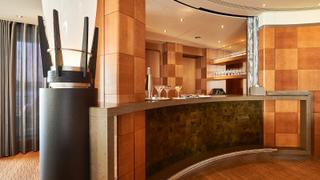 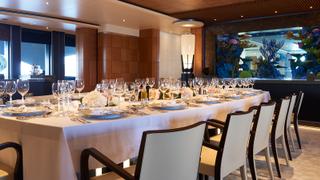 Barbara is an homage to the power of the wild, with flowing lines and a wealth of organic materials that create an 88.5 metre floating resort

Finding Nemo may not be part of the on-board movie collection of superyacht Barbara, but this is exactly what the crew had to do when a clownfish disappeared from the yacht’s aquarium. The story, surprisingly, has a happy ending, but then this is a boat on which nature is honoured, protected and used as a source of inspiration.

The product of an experienced designer-builder-owner team, 88.5 metre Barbara is a travelling beach house with roots in the wilds of the Asia Pacific region. As of November 2017, nine months after delivery, the yacht had already sailed from Alblasserdam in the Netherlands, where Oceanco built her, to Turkey, Greece, Venice, Antibes, Golfe-Juan, Sardinia, the Amalfi Coast, Corsica and then Dubai.

Docked across from Queen Elizabeth 2 at Port Rashid in the UAE when I catch up with her, Barbara is easy to spot with her dark hull and shapely superstructure. It’s a little tricky to make out how many decks she has from a distance, and there does not appear to be a straight line on her.

“I think that’s the appealing thing, it really is quite unique,” says Sam Sorgiovanni, the yacht’s Australian designer, whose fondness for nature is intimately woven into the styling. “The client’s brief was to create a timeless design, something that was like nothing else, and I think we’ve achieved that. It’s got a very organic feel, where everything is interrelated. There are no hard edges; even the chamfer, if you like, is concave, so it creates a shadow effect. There are many subtle things like that.”

As I get closer, I spot a group of people in matching grey shirts hunched over the side of the concrete dock a few yards from Barbara, which arrived just hours before. It turns out to be the deck crew and the yacht’s captain seeking a freshwater source. The haze that hangs over the Emirate contains fine sand that eventually falls down on to houses, cars and, yes, boats. To prevent damage to the lustrous paint, the crew has to wash the yacht every day, the captain tells me.

As I look more closely at Barbara’s finish, I realise that not all that sparkles under the sun is the result of high quality paint over a perfectly fared hull and superstructure. “Where it’s black on the superstructure, it is actually glass,” Sorgiovanni told me a couple of weeks before my visit. “I did not want to mix paint and glass, so we made sure they actually used glass. In fact, even the corners are glass, so it’s very clean and pure and flat; you can never get paint to look like glass because it’s never that perfect.” I now see what he means; large areas of glazing balance the superstructure’s white painted aluminium surfaces.

Once on board Barbara, I follow Captain Neal Roche to the bridge. The cool and quiet atmosphere is a delightful reprieve from the harsh sun and the heat that radiates from the concrete dock of the commercial port. Roche takes me on a virtual walkthrough, talking me through a chart he keeps in the superyacht's wheelhouse so I can get my bearings.

Barbara has an unusual and interesting layout that the owner devised with Azure Yacht Design and Naval Architecture, which produced the general arrangement. “He really wanted to do his own custom arrangement plan and not base it on any existing platform, even if it might save him time,” says Azure’s Hugo van Wieringen, who worked with the owner to develop the GA.

The bridge, plus several crew cabins and offices catering for Barbara’s operations, are on the same deck as the superyacht office and the upper saloon, but are completely separate from them. “In the owner’s office we have 3.5 metre ceilings,” Sorgiovanni tells me. “So in the central area of the boat, we’ve got these big opening doors and balconies that hinge down on both sides to create a massive expanse.” The doors, made by German glass specialist Tilse, are the largest Oceanco has ever installed.

Automated, weather-tight and flush-mounted, they slide on an invisible track, each a single pane of glass nearly four metres tall. Once open, they allow fresh air to flow through the office. Balconies expand the space even further, while waves dancing in the glass-bottom pool on the superyacht sundeck above send light bouncing all around the large room.

Stairs on the port side lead to Barbara’s panoramic owner’s suite with a central skylight. This amazing owner’s area is self-contained and private and, with its silk carpets mimicking retreating waves, is an island sanctuary in itself.

Installing the doors and accounting for their weight and their interaction with the metal was one of the build’s most challenging aspects. “At the moment, according to the rules and regulations of the classification society, glass is not part of the load-bearing structure,” says Van Wieringen.

“That poses an extra challenge in calculation and design for a structure with large windows and openings because Lloyd’s still requires all the strength to come from the aluminium part of the structure, even if the glass, of course, adds stiffness.” In addition, glass weighs a lot more than aluminium and does not flex in the same way.

It was also an interesting engineering and build challenge for busy Oceanco. “These particular doors could only be placed after the actual [yacht] launch due to their enormous size,” says Paris Baloumis, Oceanco’s group marketing manager. “A large crane was necessary to place the doors after the teak and all the customised items were already installed.” A tender was in radio contact with all passing commercial ships to ask them to slow down to ensure precise positioning of the door.

The yard orchestrated the complex ballet of suppliers. “More than 1,000 craftsmen touched the yacht over the entire build process,” Baloumis adds. F/List was the fit-out company responsible for the owner’s area interior, and Sinnex tackled the main deck, which is dedicated to a large saloon/party space, dining and five guest cabins and suites.

Sorgiovanni designed the interior and most of the furniture on board Barbara and sourced the artwork and the vast array of materials, which are as unique as they are remarkable. “The owners requested a relaxed, comfortable interior with a rich blend of textures and natural materials to create a resort-like feel that has become extremely popular with many of my clients,” Sorgiovanni says.

“This time we have gone for a resort/retreat feel, like a spa type of environment that you find in the Asia Pacific region, with all natural timbers and lots of exotic materials inside, such as pufferfish skin and water buffalo horn. The idea was to make the interior very friendly and relaxing, with bamboo ceilings, bamboo floors. We used fairly neutral stones because we wanted to keep it very pure,” he adds.

One of the most striking features, aside from the owner’s area, is the glass elevator-cum-staircase. Seemingly growing out of the lower deck and girdling the lift shaft is a root system made from teak and stainless steel. “In the Monkey Forest of Bali, I saw vines wrapping around tree trunks, and that’s where the inspiration came from,” reveals Sorgiovanni. “So I spoke to the artist and he created this amazing sculpture using timber and metal welded together. It winds its way up all four levels.”

The artist built the piece around a mock-up of the lift in Bali. “It took well over one year to design and construct,” Sorgiovanni says. “It is fully handmade, with individual small segments welded together and ground, using a special technique to weld the stainless steel to the wood.” Silky oak and niches in a galuchat and metal composite cover the bulkheads that surround this fantastical root system.

Sorgiovanni Designs worked closely with Swiss company Nature Squared. From the bounty that nature provides — shells, seeds, bark, stones and leathers — it chooses sustainable materials in keeping with its mission to foster environmental, economic and social well-being. Among the unexpected materials used on Barbara is frog leather. It is used on bed frames, where smaller squares (each one formerly a frog) create a patchwork of deep browns. “These skins are a sustainable by-product of the common frog that is eaten locally. Each skin is carefully cleaned and treated and exhibits a natural colour variation,” the designer explains.

“Sea urchin dots” frame some of the artwork and mirrors (endemic to tropical waters, the urchins have thick spines that form an interesting pattern when they are cross cut). Inlays of duck eggshells adorn the front of recliner seats inside the yacht’s cinema. Water buffalo horn decorates bulkheads, cabinet fronts and heavy doors designed to eliminate noise transfer. Water buffalo are important to rice farmers in Asia until they are no longer able to work, at which point they usually end up on dinner plates. Their deeply ridged horns can be as long as 1.5 metres.

Barbara also carries live creatures. Living Color Aquariums in Deerfield Beach, Florida, created the fish tank that separates the formal dining area from the saloon. The fish seem quite at peace in their properly maintained and enclosed environment. Captain Roche says that they have had good luck with their finned guests, barring a few early on.

“We haven’t lost any in quite a while now. One of the Nemos, the clownfish, went missing one day, and we were wondering, ‘where has he gone? Has he been eaten?’ He actually wound up down in the tank in the engine room [via the water filter] where they found him swimming. They fished him out and plopped him back in,” the captain says.

Barbara may be a floating workplace for her owner but she is also a platform for entertainment and relaxation. The saloon’s ceiling slides open to reveal party lights and the crew then clears the furniture to allow dancing. Of course, there is a superyacht beach club, a garage filled with toys, including custom Vikal tenders, a private spa pool and an observation deck with a fully equipped gym.

Sore muscles and tired arms and legs can recover quickly with help of a masseuse and vigorous water jets in the experience shower. “I have not been in it myself, but I have seen it working. It looks like a car wash,” the captain says.

The superyacht helideck doubles as an outdoor cinema, which may rival on occasion Barbara’s indoor one, although that seems hard to do. “All the seats are La-Z-boy seats,” the chief stew tells me. “You have your own footrest that comes up and full iPad control. We have 3D options and PlayStation and every game you can imagine.” And, of course, lots of movies. Barbara is quite an achievement. The question is, will there be an encore?

First published in the February 2018 US edition of Boat International.