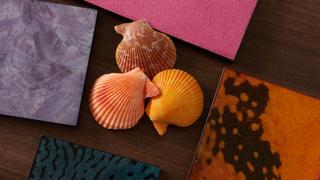 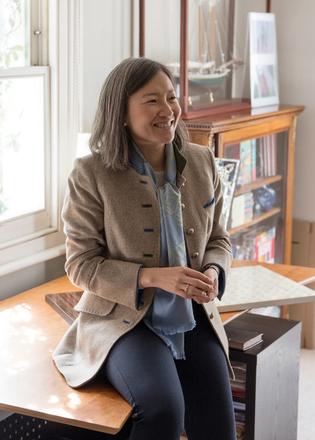 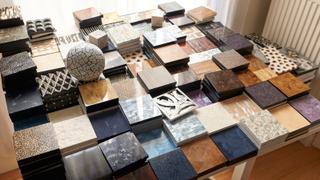 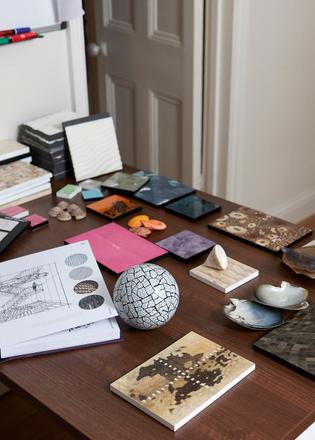 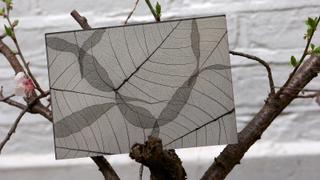 Lay Koon Tan and her Nature Squared company recycle both natural and discarded materials to make beautiful interior design pieces for your yacht and home...

There are many materials one might expect to find aboard a superyacht – marble, leather, gold, glass. But it may come as a surprise to learn that, thanks to a celebrated little company called Nature Squared, some of the largest yachts in the world are in fact brimming with commonplace, everyday products – even discarded waste.

The crackle-effect exterior of the tub in the bathroom of the master suite of 89 metre Nirvana, for example, is created from mere broken eggshells. And the glistening basins, vanity unit fronts, soap dispensers and tissue boxes in the owner’s bathroom and hair salon of Samvel Karapetyan’s 85 metre LürssenAce are similarly made from oyster shells that were otherwise to be discarded, having reached the end of their pearl-producing lives.

All were created by Nature Squared, a company based in Jona, in northeast Switzerland, that specialises in the creation of distinctive and unusually beautiful inlaid surfaces based on materials found in the natural world. Crucially, all are sourced responsibly.

“On Ace, we were really specific about the colour tone that we wanted,” says Selina McCabe, Winch Design’s senior manager, yachts, who has been working with Nature Squared this past decade. “Even when you’re working with a natural product, our clients like to specify precise tones. Nature Squared had to source these shells and ensure that only the part of the shell that met with our client’s demands was selected. Slightly too much green or blue in one area, and the whole thing would have to be made again. Sometimes they’ll produce 20 samples of just one finish, and we might be doing 10 finishes.”

Unlike most suppliers of products to this market, however, Nature Squared’s motivation is about more than manufacturing and profit. Set up in 2000, it was intended, say founders Lay Koon Tan and Paul Hoeve, “to create meaningful, sustainable employment in developing countries”, hence the fact that the company belongs to a charitable trust.

I meet Tan, a petite powerhouse of energy, enthusiasm, ideas and ideals, at her unassuming basement studio in southwest London, a scatter of samples spread before us. The colours, textures and patterns speak of richness and rarity. In many cases, however, the essential natural component turns out to be commonplace: eggshells, nutshells, seashells; all, she stresses, sourced responsibly, mostly the byproducts of the fishing and farming industries and never rare or endangered. Before us, for instance, there are examples of wall coverings and worktops made from various seashells: slate coloured tellin, brown and black hatchet, hammer and troca, the pearly white clam-like casings of the latter etched in growth lines in a sort of conchological expression of art deco.

I ask what the gleaming, intriguingly inky blue-black panel is made from. It turns out to have been created out of mussel shells (mounted on a metal honeycomb composite), just the sort you might order as marinière with a side of frites but transformed into a seductively glamorous, highly durable surface that has recently been used for the basin surrounds in all the bathrooms on a yacht launched last year. “Shell is calcium carbonate,” says Tan practically, “so unless you’re planning to spill acid on it, nothing much is going to harm it. You can laminate it, but here it is just polished.”

The mussels from which the panel is made are farmed, as is the abalone, which comes from a community-based project in South Africa. The shellfish are canned and exported and ordinarily the shells would be thrown away. “So what we do,” says Tan, “is pay the farmers for the clean shells. It enables an alternative route to market for things that would otherwise be discarded. It monetises something that doesn’t otherwise have value. It gives them an alternative source of income. And then we turn them into surfaces.”

But Tan is concerned with ideals as well as aesthetics. Abalone is not just a desirable decorative surface. It is also “terribly important”, she says, to encourage a legitimate trade in it to try to combat poaching, which can also see it “smuggled through countries like Lesotho and Swaziland, that ironically don’t have coastlines”, so fuelling, she’s been told, the illegal arms trade.

Nature Squared works with more than shells: there are leathery looking surfaces made from tobacco leaves (just the thing for a cigar smoking room or a humidor); fish skin (though never shagreen); the giant kapok seed pods and the bark of abaca trees; reeds ordinarily used for thatching; peacock, duck and guinea fowl feathers; horn; bone; even stone. “We recently put 70 tonnes of jade” on a boat designed by Christophe Leoni, “as well as 150 tonnes of shell.” They refuse to work with Afghan lapis lazuli any more, though. Too much of it was passing through Taliban hands.

It’s no wonder, given the eternal search for rich and strange materials that no one has seen before, not to mention ethically uncontroversial ones, that yacht designers cannot get enough of Nature Squared’s creations. “We have products on maybe 90 per cent of the boats over 90 metres or 100 metres that have launched over the past few years,” Tan says.

“We’re doing a project at the moment where we have in the region of 380 specialist finishes,” says Fiona Diamond, of Seymour Diamond, who has designed the interiors of more than 30 superyachts. “And I think Nature Squared are making at least 40 of those. The diversity and versatility of what they do is extraordinary. We’ve developed so many different finishes with them, all of them customised to the owner and bespoke. They do go that extra mile to ensure the quality of what they produce. But the thing that stands out for me is their passion for local communities and what they do in providing employment and trade, enabling benefits from the company to feed back.”

Tan and Hoeve met when both were partners at Arthur Andersen. Hoeve, who is Dutch, spent 35 years there, rising to head the offices first in the Netherlands and then in Switzerland; and Tan, who grew up in Kuala Lumpur but went to school in England, qualified as an accountant before branching into management consultancy. By her mid-30s, however, she was ready for a change. “When I left Andersen I thought I was going to join the United Nations or the World Bank because my interest really is in development economics,” she says. “But I talked to various people who worked for these agencies and I realised that, although they are wonderful, very worthy organisations, I couldn’t thrive in an environment like that, not after years in the City. But we wanted to do something with a developmental objective.”

Convinced of the virtue of “trade not aid”, their objective was to establish a venture that would “enable sustainable growth in developing countries” in which they could do business. (“We believe in the profit motive,” she says, “as a reality check and for sanity.”) “We said we would try to create jobs in these countries. We’d try to see what they have in the way of their own materials and skills and we’d try to foster them and combine them with our skills, which are essentially technological and scientific, to take them to a different level in the market.”

In essence, then, their business plan was to find a way of turning what might otherwise be buried in landfill into something saleable and very expensive, and in so doing encourage traditional skills going back centuries, while simultaneously developing new laminates, lacquers and substrates necessary not merely to meet International Maritime Organisation regulations, but surpass them. When it came to flame resistance, for instance, “we’re going beyond the gold standard”, she says.

It hasn’t all been plain sailing. An early attempt to set up a factory in Colombia was aborted when the Farc insurgency made operating there all but impossible. But the company Tan and Hoeve have built numbers among its clients brands such as BMW and Porsche, as well as the designers of yachts, private jets and premium residences. More than that, Nature Squared is using waste to create extraordinary materials that speak not just of nature and leading edge design, but integrity, longevity, sustainability, craftsmanship and heritage, all combined to create something one might reasonably consider the apotheosis of luxury.