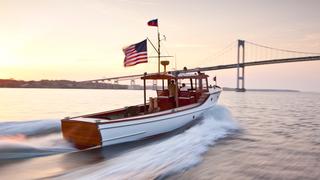 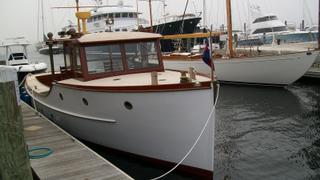 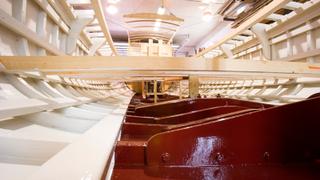 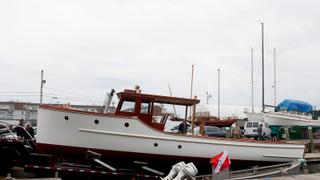 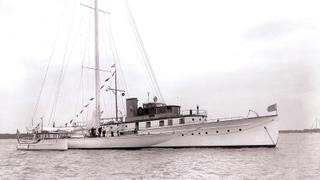 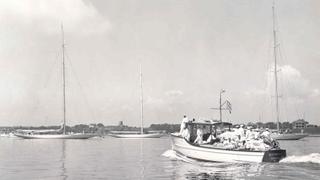 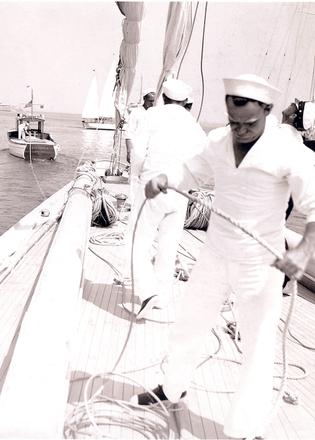 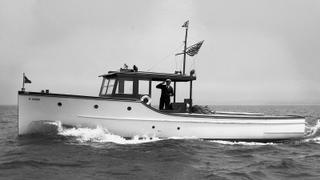 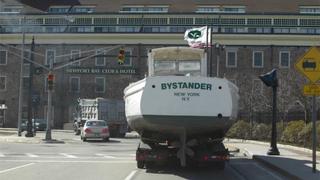 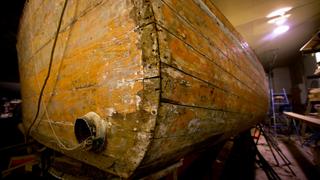 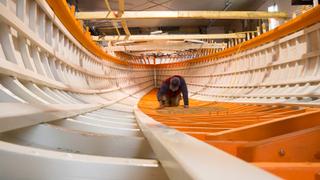 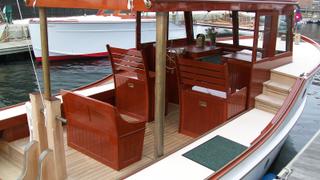 Bystander: Inside the refit of the classic America’s Cup tender

In the long and storied history of the America’s Cup, the racing yachts have come and gone with only a handful managing to compete in more than one campaign. However, from 1930 to 1970 there was one (almost) unwavering constant, dutifully towing the Js and 12s, and following alongside, carrying mainsails and jibs.

When Harold S. Vanderbilt saw off Sir Thomas Lipton’s final challenge in 1930, Bystander was there. When the William Justice Strawbridge syndicate defeated Australian challenger Sir Frank Packer in 1970, Bystander was there. And at five of the six America’s Cups in the intervening years, she was present and playing a crucial support role.

No single sailing yacht in the history of the Auld Mug has more than two wins to her name — as the tender to Enterprise, Rainbow and Ranger, Bystander can lay claim to three.

This 12.8 metre motor boat was commissioned for the New York Yacht Club syndicate’s 1930 defence of the America’s Cup. Vanderbilt was immediately taken with Bystander, calling her “absolutely indispensible” and eventually buying her from the syndicate in 1935.

Built by the Greenport Basin and Construction Company, she was fitted with a 175hp Speedway engine that allowed her to tow Enterprise, Rainbow and Ranger at up to eight knots with unfalteringly consistent performance. What’s more, her deep sail lockers allowed the mother ship to unbend her large mainsail and change to a smaller one much faster than she could reef.

Her America's Cup career continued post-war, serving as tender to Vim's unsuccessful attempt to become the Defender in 1958, before being loaned to the eventual winner Columbia.

In the 1960s, Bystander passed into the hands of Packer, who had her moved from Newport to Australia after his second unsuccessful tilt at the Cup. There she remained for the next 30 years, gradually succumbing to the ravages of time.

This all changed in 2002, when serial yacht restorer Elizabeth Meyer of the Newport-based J Class Management bought Bystander and had her shipped back home.

After a thorough inspection it was decided that, although she was still intact and in commission, Bystander was in need of a full structural restoration. There was only one problem — the Greenport yard where she was built had long since burned to the ground, taking with it Bystander’s original drawings.

However, Meyer was undeterred and set about establishing this historic tender’s provenance. “I am virtually certain that W. Starling Burgess designed Bystander because she and Vara were built at the same yard at the same time for Mike Vanderbilt,” she told Boat International.

“He acknowledges that Burgess designed Vara but does not mention who designed Bystander. Bystander is much cooler and a better design than Vara, so who knows, maybe Walter McInnnes designed her.”

For want of a full set of blueprints, Meyer used the original Levick glass plate negatives from the Mariner’s Museum to establish exactly how Bystander looked in her heyday. High-resolution scans, processed with the help of yacht photographer Onne van der Wal, allowed Meyer to replicate key details like the mahogany bench, rub rails, name boards, and much more. With this foundation in place, the work could begin in earnest.

Bystander was carefully laid up on her waterline stance at Narragansett Shipwrights in Newport. Hull supports allowed the backbone and transom to be removed without affecting the hull shape. “When I restore a boat, no matter how desperate her condition, the restoration is done one element at a time so that the entire boat is there the whole time,” Meyer adds.

The stem was in good enough condition to be restored and put back into the boat, but the rest of the keel, including the stern knee, was replicated piece-by-piece in oak, in keeping with her original construction. The hull itself was also replaced, but the original cedar planking was retained above the waterline, where Bystander was double planked.

Meyer also put her own signature on Bystander by modifying the layout and deck fittings in a few key places. The original hinged hatches were left out of the cockpit design, freeing up more deck space, while the interior layout was redesigned to allow for a bath tub and a larger galley.

A modern 440hp Yanmar turbo diesel engine was fitted, allowing for a top speed of 17 knots, and a new swept-back propeller was designed by naval architect Matthew Smith, but Meyer was keen to retain Bystander’s classic handling characteristics. For this reason, her original cable and quadrant steering was kept in place.

“It is an awful mistake to put in hydraulic steering in a restored boat,” Meyer argues. “It just wrecks the feel of steering and I wish naval architects would stop plumping for it.”

After a painstaking, historically accurate restoration that took more than 23,000 hours of careful work, Bystander was relaunched in May 2009.

Over the past eight years she has proven her worth as a fast and agile cruiser, perfectly suited for gliding around some of New England’s finest yachting haunts.

With great reluctance (and longer-range cruising in mind), Meyer has put Bystander up for sale, but she is confident of finding a suitable owner for this unique artefact from the golden era of the America’s Cup.