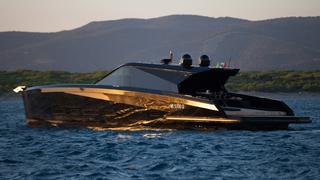 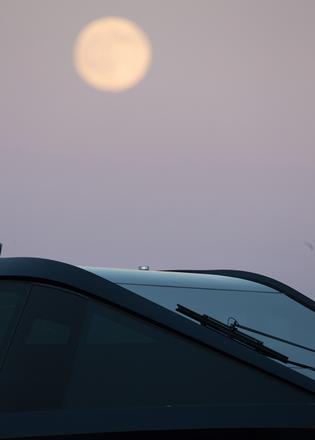 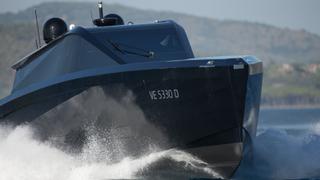 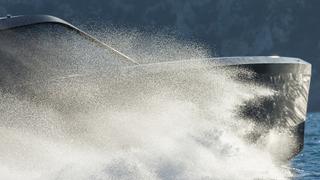 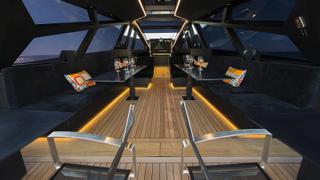 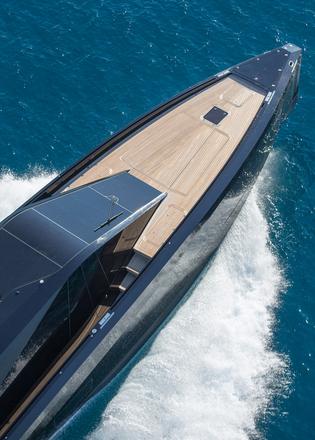 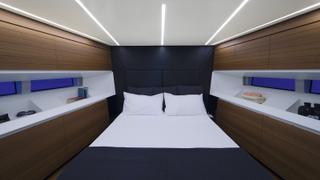 Checkmate: On board the first Wallypower 80

In English, the word “wally” was long ago adopted as a noun to describe a fool or a simpleton. But you might not know that, in its adjectival form, “wally” also means fine, pleasing, splendid, robust and strong — all the things to look for in a boat, in other words.

So, in this case, it’s all about context. And, in the context of the superyacht world, a Wally is invariably something that’s pleasing and very often splendid, too. A Wally is also difficult to miss — a fact that quickly makes itself apparent as I tread the boardwalk of Monaco harbour surrounded by umpteen large and expensive vessels made from pale coloured GRP that, to the untrained eye, might all have emerged from the same production line.

But among them, standing out like a glittering black diamond in a sea of white plastic, sits the majestic Checkmate, the 24 metre carbon and glass high-speed motor yacht built by Wally in 2015 to the specifications of her owner, Oscar Marchetto, a 53-year-old Italian industrialist whose company makes and supplies most of the glass, steel and aluminium fittings used in the building of cruise ships.

His is the first Wallypower 80, the largest yacht built in the series since that most famous of boats, the 36 metre Wallypower 118 built for Wally Yachts founder Luca Bassani back in 2003. And here I am, the first journalist allowed to take a ride on Checkmate.

I am welcomed aboard by the boat’s captain, Filippo Barusco, who, when he’s not navigating Checkmate around the Mediterranean, also runs Venice4Sea, an RYA-affiliated instruction course for would-be skippers of both motor and sailing yachts.

Seconds after setting foot on the boat’s immaculate decking, I realise a Wally is not for the shy: every passer-by with a phone (i.e. every passer-by) is aiming his or her lens at Checkmate’s stealthy form and reeling off Wally-in-the-background selfies as though she is the first superyacht they have ever seen — in a harbour full of them. “It gets worse when you’re out on the water,” warns Barusco. “Sometimes we get followed by helicopters, especially off Saint-Tropez.”

We spark up Checkmate’s twin MAN diesel engines and gently inch our way out of port and into open water. We’re pursued, I can’t help noticing, by a clutch of small powerboats containing yet more amateur lensmen. As soon as conditions permit, a tweak of Checkmate’s throttles induces a blood-curdling whine from the MAN engines and reduces our fleet of admirers to the size of distant toy boats.

The previous day, I’m told, the mistral had passed through the Côte d’Azur, leaving behind some chop. But, even with 3,600hp powering the Kamewa water jets to the point that Checkmate is slicing through the waves without effort and creating a veritable tsunami of spume, there is none of the buffeting that might be expected.

And it’s as we reach a delicious sweet spot in which Checkmate seems to be almost gliding over the waves close to maximum speed that I notice that the crystal clear sound of Haydn’s Cello Concerto No 1 is pouring from the Bang & Olufsen sound system, adding a pleasantly surreal element to the proceedings.

“Signor Marchetto is a huge music fan,” says Barusco. “We’ve got amplifiers in the bow and the stern. I’m told they put out 1,000 watts.” I’m not going to argue, not least because I am bracing myself for another demonstration of notable numbers — in this case, Checkmate’s ability to haul down from 37 knots to zero in a mere 13 seconds, thanks again to her water jet propulsion system.

Considering Checkmate’s 48.5 tonne displacement, such a trick is not only impressive, but remarkable — and could certainly be a life-saver in a man overboard situation. But that sort of drama is far from our minds as we drop anchor in a (surprisingly quiet) bay and settle down for lunch.

“Where shall we eat?” I ask. “Inside or out?” Before the question has really registered, I see that we are going to eat “inside out” as the crew begins to raise the stern deck on its invisible hinges to lower the substantial cockpit doors into a hidden hold, thus producing a remarkable and unexpected area of open air, loft style entertaining space capable of accommodating 20 in comfort.

“It was the owner’s idea to make it possible for the rear wall of the cockpit to completely disappear,” says Barusco. “He wanted a boat that felt really open and airy. But I’m told it was an absolute nightmare to get the system right.”

And the transformer yacht touch doesn’t end with the disappearing doors because, with the flick of a switch, another section of teak on the bow opens up, rises skywards and, after a few seconds, settles into position as a dining table and a pair of benches.

Further surprise features of Checkmate include a huge “secret” locker in the bow for stowing her life raft, others at the edges of the deck for carrying dive bottles and flush-fit mooring winches that rise up on electric motors.

That such hi-tech trickery exists on board is hardly surprising, since Wally is constantly innovating under the leadership of Bassani. On Checkmate, everything from the LED deck lighting to the cameras trained on the key points of the engine room are controlled by iPad, the cabin mirrors morph into television screens and the bidets and lavatory pans are made from carbon fibre.

“I have a passion for building things and I’m very keen on anything technical,” Marchetto says. “For me, there was no other boat because I’ve always been fascinated by Luca Bassani’s designs and I really like the fact that a Wally always stands out in every superyacht marina. But it has been a very practical and usable boat too.

“My wife and two children have spent more than 50 days aboard Checkmate during the past year and we have done many trips between Sardinia and the Côte d’Azur, and around the Balearics.”

But Marchetto’s enthusiasm for building things has already caused him to contemplate Checkmate’s replacement, and she is up for sale at a price of €6.5 million. “I know she’s a superb boat and she offers everything we need — but it’s rather like building a house. Once you have done it, you always decide you need more space.”

But there are not many homes that look like this, I consider as I step back on to the concrete in Port Hercules, past another gaggle of people snatching photos of themselves with Checkmate in the background. And it occurs to me that, for the first time, I might actually appear in a photo where I’m proud to be tagged #wally.

Tango: On Board the 30 Metre Wallycento Sailing Yacht