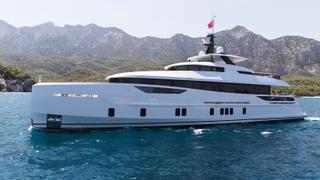 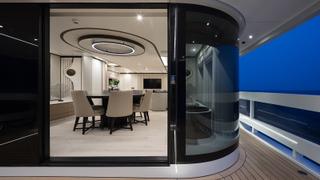 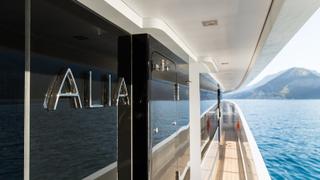 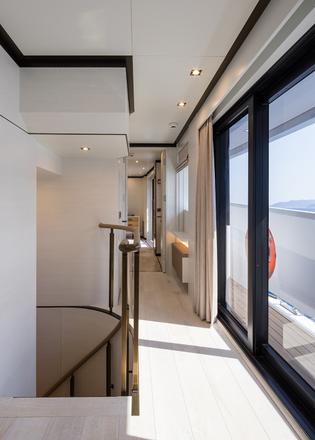 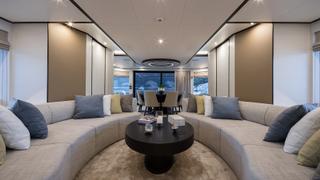 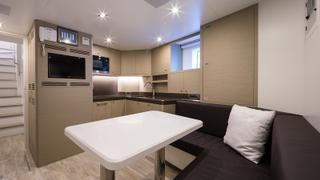 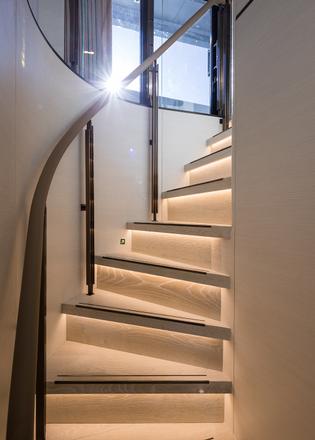 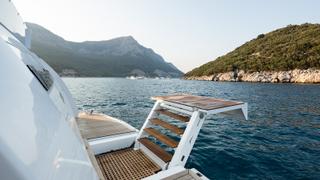 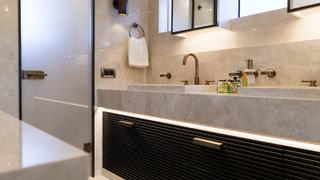 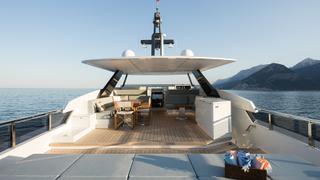 The design brief for Alia Yachts’ first 31 metre “pocket superyacht” Virgen del Mar VI called for just short of the impossible. The instructions handed to exterior designers Omega Architects and interior stylists RWD asked for a yacht that defied its dimensions. Like the TARDIS or Mary Poppins’s bottomless carpet bag, it should feel bigger on the inside than it appeared. While the owner asked for the yacht to be designed with family friendly cruising in mind, achieving this impression of extended space was key.

The full-height, wrap-around windows in the dining saloon were key in creating the illusion of more space

RWD project manager Adrian Chisnell explained that “while there are many 30 metre yachts afloat and in-build, very few have the feeling of space and amenities of much larger superyachts.” To achieve this in Virgen del Mar VI’s interior, RWD employed a variety of methods ranging from “optimising technical spaces” and “using efficient joinery detailing” to simply relying on “tricks of the eye using light and space”.

The use of glass, both inside and out, was key to achieving this effect, as well as creating a definitive relationship between inside and outside spaces. Omega Architects chief executive Frank Laupman pointed to the full-height, wrap-around windows in the dining saloon which, paired with the glass bulwarks outside, offer “unimpeded views”.

“An important part of our philosophy is the feeling of an inside and outside connection,” he said. “We let in natural light and offer views wherever possible.” Chisnell agreed that these wrap-around windows “extend views to the sea and beyond, while maintaining a level of storage and service required onboard.”

This heavy use of glass also created an effortless merging of spaces onboard, which was key in the design’s mission to create the illusion of a bigger superyacht. Both Laupman and Chisnell pointed specifically to the main deck corridor, which leads from the main saloon to the door of the owner’s cabin. “The long view, backlit surfaces and huge glass door panels, combined with the wall of windows along its length portrays a vista rarely seen on a 30 metre yacht,” Chisnell said. Laupman agreed that this layout “further blurs the borders between inside and outside”.

Chisnell revealed that the owners’ cabin is his favourite space on the yacht because it succeeds in achieving the spatial ambitions of both designers. The 22.5 square metre stateroom sits on the main deck and features two glass doors that enter onto a private terrace. “The owner’s suite embodies all the best features of the yacht,” Chisnell said. “Full beam and direct deck access – all on a 30 metre yacht, but it feels like the owner’s cabin of 40-45 metre yacht.”

Described as “fresh and airy”, the interior design is populated with light oak and dark sycamore tones, with hand-cast dark bronze details. While these materials succeed in achieving the owner’s desired “relaxed living” mood for family and friends cruising, the interior materials were also integral to achieving the desired effect of spatial trickery.

The weathered oak floor for example allows “the eye to be drawn beyond the interior, not constrained by it,” Chisnell said. Meanwhile the feature wall panels combined with discreet lighting lends “a great depth to the bulkheads in areas that require the room to be visually lengthened.” “This again,” he explained, “creates the impression of more available space than is in reality.”

While the owner’s brief might have initially have posed “a challenge in every way,” the designers’ ability to overcome even the most impossible of obstacles resulted in something “very special indeed,” Chisinell said.