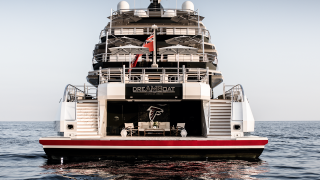 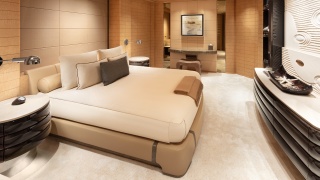 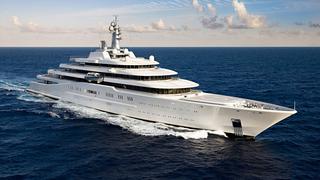 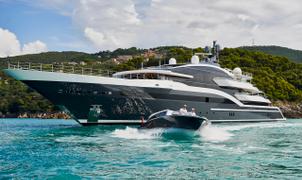 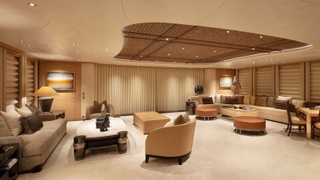 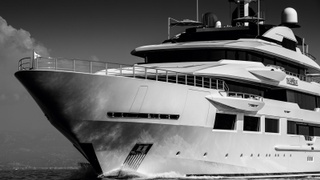 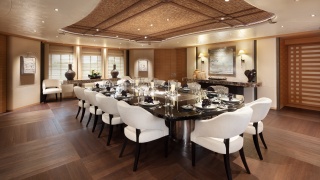 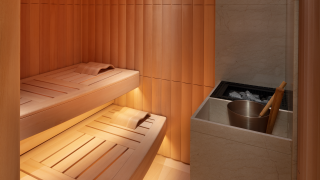 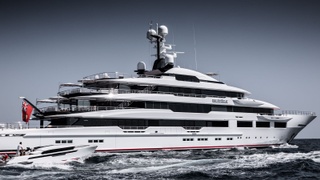 One of the big hurdles we have to overcome as boats get bigger and more complex is build time,” says Espen Øino, designer of Oceanco's new 90-metre behemoth DreAMBoat. “Today a project of that scale is a four-year programme, then perhaps another year once the boat is delivered, revving it up and crewing it. So it quickly becomes five and that’s a very long time for many people.”

That’s why the Dutch custom yard built this vast project – to an advanced stage – on speculation. That’s right: a 90-metre boat, on spec, with no guarantee that someone would buy it. This is vertiginous decision-making. But by beginning DreAMBoat without an owner, Oceanco’s standard year of design plus three years of build was reduced to 18 months, from the owner signing the contract to delivery. “I think in the end this is one of the selling points, reducing lead time for a client,” says Roderick Gort, project director at Oceanco, with some understatement.

It is a testament to the health of the superyacht market, and of Oceanco in particular. In the Top 101, BOAT International’s annual list of the world’s biggest yachts, Oceanco ranks second, with more super-sized boats afloat than any builder save 145-year-old German yard Lürssen (not bad for a relative upstart, launched in 1987).

Let’s skip straight to the happy ending. It worked: a client bought DreAMBoat when fairing and outfitting were under way. Timing had definitely been a factor – he wanted it for the summer – and while he requested more than 100 minor edits, the only major change was the addition of a VIP suite on the owner’s deck.

So how did Oceanco achieve this result? When it comes to building smaller superyachts on speculation, the received wisdom is to stay neutral to broaden the appeal to potential owners. On DreAMBoat, Oceanco threw this tenet out of the porthole. “We feel that if you do a stock project this size you can’t be mediocre,” says Gort. “You want something specific; you want something special. In our experience, average doesn’t do it on this size of project.” While the yard was careful to retain scope for an owner to customise the project when they came aboard, up in this realm you can’t hedge your bets – you need to commit to a design that will inspire and delight.You don’t need 10 clients who like it, you need one client who loves it.

Enter Terence Disdale, who penned DreAMBoat’s interior, and Espen Øino, who designed the exterior and GA. Disdale began his career in the late 1960s at Jon Bannenberg’s hothouse studio in London, one of a handful of talents who would go on to define modern superyacht design. Despite his own studio’s list of illustrious repeat clients and gargantuan projects (see 139.3-metre Al Salamah, 85.9-metre Ecstasea, 78-metre Montkaj, 81.8-metre Kibo (now Grace) and the record-breaking 162.5-metre Eclipse), Disdale’s mantra has remained “beach house not penthouse”.

Øino, meanwhile, is the man of the moment, with more exterior designs in the Top 101 than anyone else. The Norwegian-born, Monaco-based designer has penned some of the most dynamic yachts to hit the water in recent years. Take the genre-defining 126.2-metre explorer Octopus, the flowing decks of 133.9-metre Serene, 135.5-metre Crescent, with its “concertina” heli-hangar, military-style 85-metre BOLD or ultra-cool 76.2-metre expedition yacht Cloudbreak, with its ski room and vast garage of toys.

Oceanco, then, paired a bona fide legend with a more recent arrival in the pantheon – neither one “vanilla” in style but both designers that a client choosing a 90-metre yacht is statistically likely to engage (but who, strangely, have never worked together before). The project is based on a proven hull from Oceanco’s 700 series that started with Alfa Nero but has been developed and extended since. More recently it formed the basis of 90-metre DAR, although viewed alongside DreAMBoat, “it shows how different two such vessels can be above the waterline”, says Gort.

Øino’s brief from the yard was “timeless and contemporary” – “so the windows are all rectangular, it’s not a very busy design” – but he punctuated the look with some interesting details. To make the most of views from massive windows, Øino cut down the corresponding sections of bulwark – a move you have to pull off carefully to avoid a messy look. He has achieved this by replicating the trapezoidal shapes of the bulwark cut-downs in the freeing ports directly below them. There are also chamfers and knuckle lines that subdivide the massive surfaces to make the design appear “lighter”.

These details gave Oceanco’s workers a few headaches. “The longitudinal lines, sometimes 50 or 60 metres, have to end in the exact correct spot to make one point,” says Gort. “Doing this out of aluminium and then fairing it in such a way that it looks like it was drawn with a pencil indicates the craftsmanship of the gentlemen who built it.”

But this is a yacht built from the inside out – “that’s how you design a boat”, says Øino. The GA was informed by his experience of how such yachts are used. Most waking hours are spent outside, so those spaces are maximised – and protected because “it’s very rare that there is absolutely no breeze”. Big tenders for a safe, dry ride are also, says Øino, “very important for a successful boat”.

There’s plenty of al fresco space on board, with sprawling aft decks on every level and a real treat up top. “I think one of the areas which stands out has been the sundeck,” says Gort. “It is almost 300 square metres of exterior/interior space with very flexible use.” There’s a dining/coffee area, a spa pool, bar with a television, a huge sunbathing area and the set-up for an outdoor cinema – the latter an owner request. Because of its lofty position, the area remains private, while sliding glass doors forward keep it protected.

Lower down, “we chose a significantly sized pool quite far out on the main deck, and that reduces the options that you have below”, says Gort. So rather than a beach club/spa aft on the lower deck, this reduced-height area has been assigned as a technical space. A spa can instead be found way up on the bridge deck. “We felt a spa should be a private area, somewhere where you should be able to lower your energy and relax,” says Gort. Tucked away behind the wheelhouse, it’s a space that can be used in seclusion even when the boat is in port and other boats’ beach clubs are closed up and out of use.

This arrangement also leaves space down on the lower deck for a vast tender garage with two 12-metre side-openings. It houses a 10.8-metre limo tender, customised to match the mothership, and a 10.5-metre sports tender – plus acres of space for the latest water toys.

But even areas that are relatively standard in layout are transformed by Disdale’s decorative treatments into warm, comfortable and highly individual spaces. “We always choose materials that come from mother nature, from places such as Bali, the Philippines, the Caribbean,” says Daniela Zulli, director of Terence Disdale Design. “Like the coconut ceilings, like the cracked eggshell table-top and then the oak, which we use in various ways and various colours.” Zulli notes that almost all the finishes are custom-made to their designs, down to the table lamps. Even the rattans are bespoke – “we choose the weave and the colour” – and this level of control allows the designers to make incremental modulations in tone in different spaces.

The bright, open main saloon is lined with custom cream bamboo carpets, which are “a lot more durable than silk and don’t have that warm feeling of a wool”, says Zulli. The television here recedes beneath a stone panel designed by Disdale and created by hand. “In each boat it’s something that we do,” says Zulli. “In some other vessels we made them in metal or mother of pearl.” Here they’re a smooth, almost sea-worn alabaster veneer.

The separate, formal dining saloon seats up to 18 around an extendable table with a three-tone black lacquer finish, adjacent to a buffet counter with a petrified wood top. Forward of here are six warm-toned guest cabins, while on the upper deck, the owner’s area has a darker, sexier night- time vibe in high gloss, lacquered palm wood and parchment. This comprises a children’s cabin, a VIP cabin and the owner’s suite with his-and- hers bathrooms and dressing rooms, as well as 180-degree windows looking out over the foredeck – a space that could as easily host a quiet breakfast as an Airbus H145 chopper.

At the aft end of this deck is the family-focused upper saloon with coffee tables bordered in leather upholstery, so you can put your feet up. There’s a big television, and for movie time an even grander cinema screen that drops down in front of it. Aft, the informal dining space features a round table surrounded by floor-to-ceiling sliding glass windows – “to create an indoor/ outdoor experience”, says Gort, an effect amplified by teak decking that spills from the aft deck into this space.

Up on the bridge deck, the highlight is that spa. The massage bath was an owner request – “custom-built, it runs a programme of 150 water and air nozzles”, says Gort. There’s a glass-doored steam room – “so you don’t feel claustrophobic”, says Zulli – a sauna, a massage room and a beauty salon with a Swarovski crystal ceiling.

The variety of textures and finishes throughout the boat (170 to be exact) is extraordinary. A modest lobby forward of the main saloon offers a feast for the senses, from the cushioned weave of leather under-foot, to a natural stone mosaic and the ribs of oak that clad the curving walls. “Each rib has been veneered separately, sprayed separately, and then applied,” says Gort. “Throughout the boat it’s literally kilometres of ribs, created piece by piece.” Likewise a cream brush-stroke effect in the overhead was painstaking to create.

But not every element is so premeditated. While there are several works by established artists, there are also “pieces that are not necessarily artworks but we use them as artworks”, says Zulli. These include large crags of pyrite, tiger’s eye, ammonite, desert rose quartz and driftwood used in place of sculptures; ancient Chinese honeypots used like classical vases; there is even a cross-section of rusty steel pipe, furred up with sugar-white calcium, mounted on a base.

Perhaps the biggest achievement of the layout and decor is that, despite running through more than 1,000 square metres, as Gort puts it, “it doesn’t feel humongous. You can be on board with only a few guests and you still feel the vessel is being occupied.” That is, really, the dream boat.

Get the latest issue of BOAT International sent straight to your door: