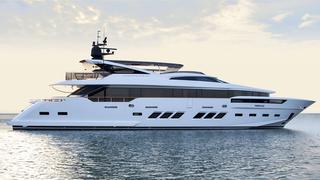 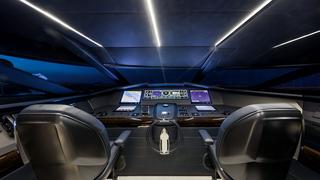 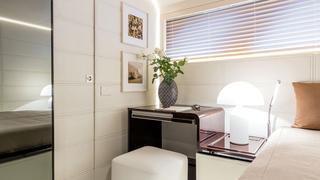 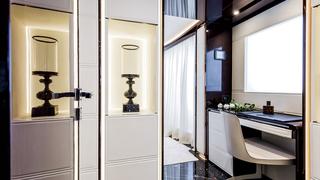 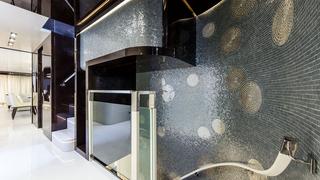 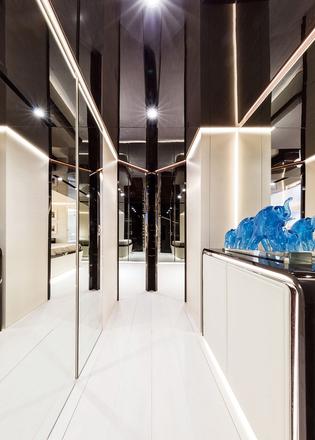 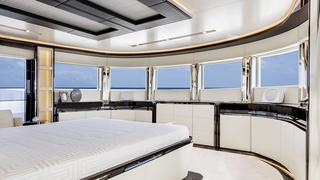 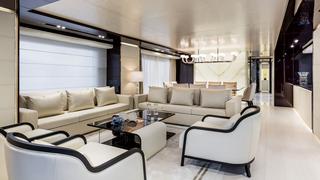 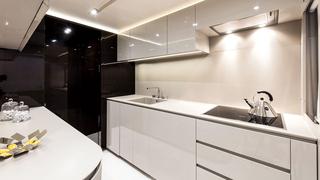 If you’re going to start a shipyard at the tail-end of one of the most traumatic economic episodes the world has ever experienced, when boatbuilders are struggling all around you and order books are bone dry, you’ve largely got two choices: go cheap or go new.

Peter Zuber, founder of Fano, Italy-based DL Yachts, chose the latter option. In teaming up with Enrico Gobbi and his Team for Design studio, Zuber’s ambition was to bring fresh thinking to the sub-50 metre market: bold, striking lines and boats packed with innovative features (including, on the first 34 metre, a lobster tank on the flybridge).

The first yachts out of his sheds were a pair of 26 metre models. Hull one, Miss Anna, touched the water in 2014, the second, 7 Seconds, in mid-August 2015 and a further three – all sold – are in-build. The boat featured here is the flagship, the Dreamline 34, just launched and seen exclusively by Boat International.

Another 34 metre is already in build, and DL Yachts is on the verge of securing the contract for a third, as well as inking a deal on a 30 metre. That’s a total of nine orders in three years. Chapeau.

“Our success lies in the fact that we don’t crib other yards’ products,” the yard’s CEO, Paolo Bencivenni, says. “We have created our own style and we propose customised models that for their level of finishing and features have no competitors in their size range. Experienced owners appreciate these things.”

They must do, because there aren’t too many other start-up yards, Cantiere delle Marche being the notable exception, that can boast such a successful early trajectory. There’s even talk of building bigger.

“We will go where our clients lead us,” says Zuber. “48 to 50 metres may be the limit of what we can produce in GRP in our current facilities, but a new facility is about to be inaugurated. Yachts above 50 metres will be built in steel and aluminium, but we can also build smaller boats in aluminium.”

The yard might not be cheap, but it is competitive, the founder insists, thanks to a lean management structure and a firm handle on costs.

The family style is clear from the 26 metre to the 34, but it’s not without substance. The yard brought in Giuseppe Arrabito of Arrabito Naval Architects to develop an efficient hull shape to reduce fuel consumption and provide a kinder ride.

He designed what he calls a “waveless hull”, which dampens the bow wave and limits pitching, effects proven during tank testing at SSPA in Sweden. “We have minimised the longitudinal curvature of the waterlines while the forward part of the hull is dramatically refined so the wave formation at the bow is almost cancelled,” he explains.

“The Dreamline 34’s hull is designed to stream water flow along the hull changing the pressure distribution and overcoming resistance. The geometry of the aft portion of the hull provides ‘fast displacement’ hydrodynamic lift and a partial planning effect.”

The concept hits maximum efficiency at 10/11 knots, when the total consumption of the two MTU 1,920hp engines is just 75 litres per hour.

The same focus was applied to noise and vibration on board, which is aided by significant and studied dampening. During our tour of the yacht, one generator and the air-conditioning were running, yet it was impossible to perceive the slightest noise.

Quiet and stable, then, as fuel tanks have been designed so diesel can be shipped from one side of the boat to the other, or fore and aft, to keep things steady, while Humphree interceptors off the transom help trim at all speeds.

Luxury fabrics and materials, including glass statues, were hand-picked by the owner for a sumptuous finish

Gobbi’s design is typical of his studio’s output – aggressive, sharp, almost wind-sculpted. What it’s not is middle-of-the-road, or super saleable, making Zuber’s decision to commission the studio a brave one.

“A dynamic line is pivotal to the Dreamline 34’s overall look,” the Italian designer says. “Filling out the yacht’s footprint to the fullest, the exterior styling lends itself to a strong character.”

One notable feature of the Dreamline 34 is the forward section of the main deck, which bulges out to the beams to create a sort of terrace effect.

It gives the owner’s suite, located within that forward sweep of windows, direct and private access to the foredeck, creating a hideaway unusual on a boat this size.

That single, long window run on main deck level provides a superb panoramic outlook for the owner’s suite forward, and stunning lateral views from the huge, open-plan saloon. Throughout this level there’s a padded elegance that helps create a warm, intimate atmosphere.

The saloon benefits most of all, where glossy wenge, leather and backlit onyx are brought to the fore. “The owner was personally involved in the choice of all materials and fabrics used on board as he wanted a linear yet luxury setting which reflected his lifestyle,” Gobbi says.

Walls and ceilings, which are dotted with hundreds of minuscule LEDs to represent a starry sky, are clad with matt maple while the luxurious floor meshes soft carpet and bleached oak planks with onyx frames.

The Dreamline 34's saloon is divided, typically, between lounging and dining, but there’s nothing standard about the dining table, featuring a glass top framed in wenge, or the elegant lighting system above it.

Gobbi, who designed the interior, says, “We developed the project’s style and layout with Peter Zuber and the owner with whom I had worked in the past. We designed most of the furniture and decorative items, glass statues included.

"The imposing lamp above the dining table has been finely executed by Barovier & Toso’s master glaziers in Murano who keep the historical Venetian glass crafting tradition alive.”

A fold-down balcony aligned with the dining table offers endless views to guests.

They get pretty good views, too, through those italicised windows on the lower deck. The four guest cabins down here each have bright, elegant bathrooms clad in marble with white onyx washbasins.

The Dreamline 34 is a double-decker yacht, but Gobbi has snuck in a raised wheelhouse without it popping out of the design. He’s achieved this by creating a half-deck forward, which has the added benefit of giving owners and guests more space.

The wheelhouse gives access to the vast sundeck – a party space par excellence. A large lounging and dining space is protected by a hardtop with sliding panels, but the attention is grabbed by a teppanyaki grill and heated water tank for keeping lobsters and fish alive and fresh.

“The owner asked me to find a suitable place for an 18 degree water tank to have his favourite food at hand,” Gobbi says. “He is a fisherman himself and the fish and crustaceans he catches are kept in the tank and get cooked in front of guests on the grill.”

For after – or before – dinner, a glass custom jacuzzi with a gurgling waterfall sits just aft or, if you don’t want to get wet, there’s no shortage of sunpads.

A sign of yard founder Peter Zuber’s years as a yacht owner and engineer is found forward on this deck – an outside helm station that slides outwards as a balcony overlooking the sea.

It’s an amazing piece of engineering, and one whose benefits are obvious if coming alongside, as the skipper has a clear view forward and aft. From this vantage, the helmsman can operate the twin MTU 12V 2000 M94 engines, delivering a total 3,840hp.

The top speed of 22 knots is achieved without stress, thanks to the smooth power delivery and big sprayrails deflecting the spray and providing buoyancy. A comfortable cruise is found at 20 knots, but drop further to really make the horizon your own.

The hull is easily adaptable, too, as the second Dreamline 34 metre has been specced with the bigger MTU 2,600hp units for a maximum speed of 28 knots, befitting Gobbi’s sports car exterior. This first hull, though, is set for a slightly more sedate life. Although those lobsters might not agree.

All photos courtesy of Alberto Cocchi

First on board: Firefly is a gentleman's motor yacht designed to go far