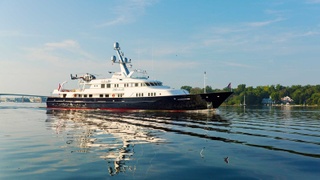 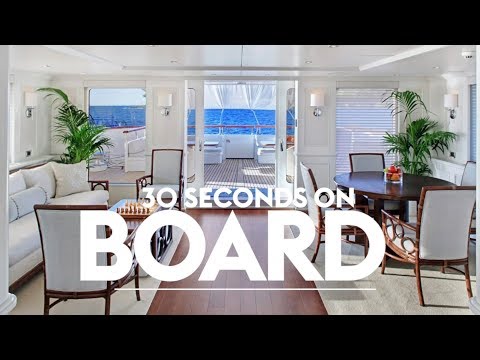 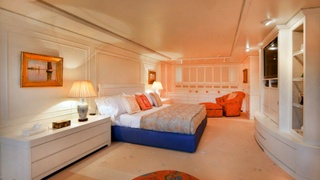 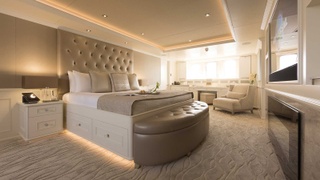 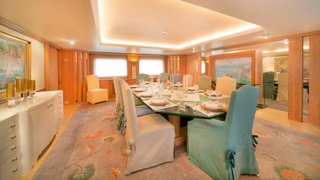 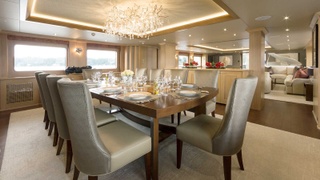 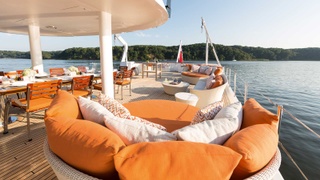 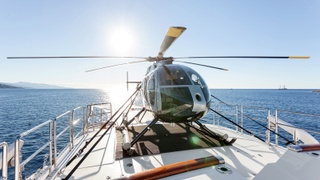 When Mindy and Glenn Stearns bought the 57.3-metre Feadship yacht Calixe, and rechristened her as the magnificent Minderella (named after a musical that Glenn had commissioned from the Orange County School of the Arts for Mindy’s 40th birthday), the plan was to do “a few quick touch-ups” before taking her around the world on a 15-month family adventure. “She had beautiful bones, but she hadn’t been on the ocean much in the two years prior,” Mindy explains. “She needed a little TLC.”

What started out as a little TLC soon turned into a full-blown refit, with no stone left unturned – from a new paint job, teak decks, exterior awnings, tables and seating, to a complete overhaul of the engine room and control room, a new custom-made stainless-steel galley shipped over from Germany, new generators, new air conditioning and sewage systems, audiovisual kit, interiors – the list goes on… Along with two new tenders and a Viking sportfishing boat, there was even an aptly named helicopter: Glass Slipper, which had a paint job to match the mothership.

“We were excited to have our yacht, and we really wanted to use it, but it took us almost two years to finalise,” Stearns says of the family’s impatience to hit the water. But, she explains, it was all worth it – there’s not a single change that she would make differently second time round. And the couple and their two young daughters (now almost 11 and 14 years old) did get their grand tour in the end: yachting in India and the Maldives; hopping between tropical islands in Raja Ampat, Indonesia; and feeding raw meat from their tender to dragons on Komodo island (one of whom tried to join them on board), among other memorable experiences.

Although, if they were to do it again, she laughs, they “probably wouldn’t do a refit that cost more than the whole boat!”. In Minderella’s case, it was individual people, rather than technical issues on board, that complicated the project.

“There was definitely drama,” Stearns says, explaining that the couple initially hired a contractor for a much smaller refit. As the project snowballed, it became clear that the scale of the work was significantly larger than the contractor was set up for.

It was a lesson learned for the Stearns, and Mindy also notes that in hindsight “another important factor is to gather multiple bids. Often when outfitting or purchasing items for a ‘luxury yacht’ the bids increase in multiples. If a vendor thinks they are the only one in the game,” she explains, “they don’t tend to price competitively.” Their captain also abandoned ship midway through the refit. “Like yachts, captains also need to be on the water,” Stearns advises. “Being landlocked is a big challenge to deal with, but we now have an incredible captain who we’ve had from the end of the refit, and he’s assembled a top-notch crew too.”

The yacht’s knight in shining armour came in the form of Joanne Lockhart from YachtNext, an interiors and outfitting firm in Fort Lauderdale, Florida.

“She was very hands-on and oversaw everything that went into the refit,” says Stearns. This included exterior lighting, underwater lights, name boards and new Minderella crown logos, through to getting the latest Hermès china, Puiforcat crockery and Saint-Louis crystal on board. “She was wonderful to work with,” enthuses Stearns. “She understood our vision for Minderella – we wanted it to be elegant and luxurious, but feel like home.”

A lot of the changes were designed to make the yacht more usable as a daily family home. The sundeck was jokily renamed the “fun deck”, as an old two-person spa pool, which was used by the previous owner to keep lobsters in, was replaced by a spacious 12-person version. The change meant removing a seating area, and naval architects from Feadship worked with the team on the necessary reinforcement of the deck to hold its weight. “It’s been used a lot!”, says Stearns. “It’s just the perfect spot to be sitting in when the boat is under way and you’re cruising along the Mediterranean coastline.”

The master lounge was kitted out with new furniture and soft goods, redesigned as a space that could be used for relaxation and yoga, with massage tables, mats for stretching and furniture that could be moved around. It was also fitted out so that the children could have their school lessons while they were travelling (in their matching crew “school” uniforms), with a desk, wipe board, easel and space for textbooks to be stashed, along with a sofabed should the girls’ friends want to stay over.

And, the wall between the main saloon and the dining room was removed, making “one of the largest living spaces on board a yacht today”, says Lockhart. The room divider now accommodates a large television that can rotate 360 degrees, while a dramatic chandelier – which was hand-made in Portugal and comprises 200 glass droplets that represent coral – draws the eye in. There’s more space for family and guests, but the Stearnses also prefer “an open design, where everything flows into the next room”, they say.

More space was found in the four guest cabins, all of which had a complete refit. They now accommodate king-size beds, and two of the cabins have been split into twins. There’s more storage on board too, from additional shelf space to an enormous cabinet for all the new china and service items. And there was a complete upgrade on all safety items, such as life rafts, ahead of the family’s big trip.

Funnily enough, the couple didn’t have the chance to act on some of the best advice they received. “Our dear friend Dennis Washington, who owns Attessa and Attessa IV and is no stranger to refits, told us to enjoy our yacht for a season and then see what we might want to change,” says Stearns. “We thought we might do that, but once we got into the refit, it took on a life of its own.”

Nevertheless, “Minderella is my happy place”, she says, “and the beauty that was created with the refit, and the luxury and enjoyment we have experienced on board Minderella, is the stuff of fairy tales”.

From Stearns’ perspective, the most important thing any owner embarking on a similar project should remember is patience. “Patience, patience, patience!” she laughs. “Your very own fairy tale awaits.”

Berilda: Inside the Refit of the 38.4m Classic Superyacht