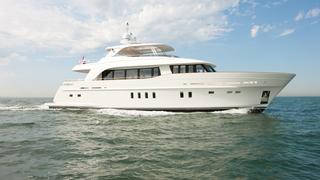 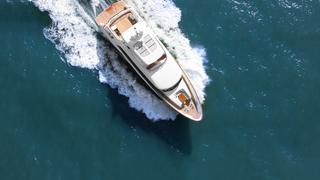 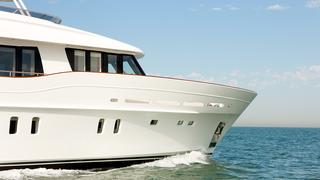 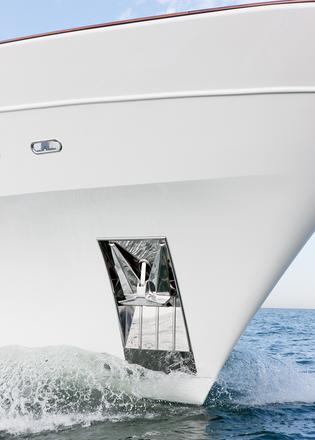 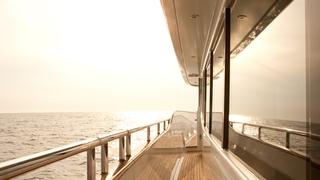 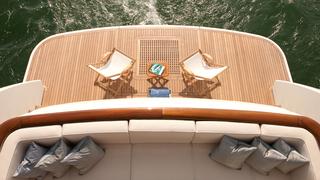 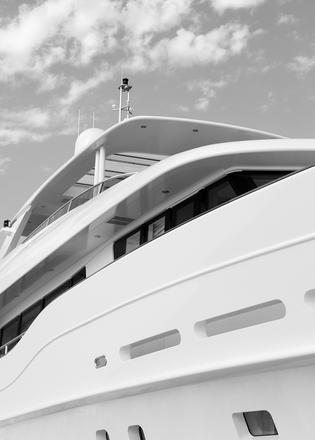 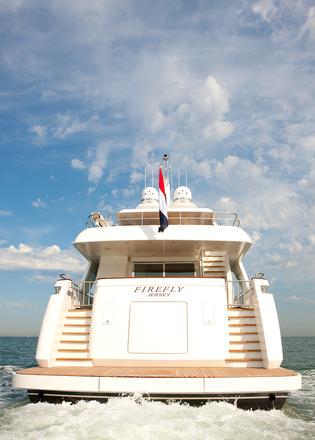 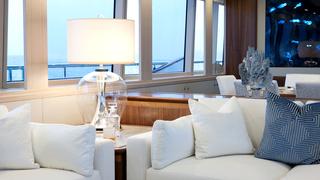 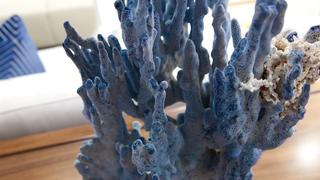 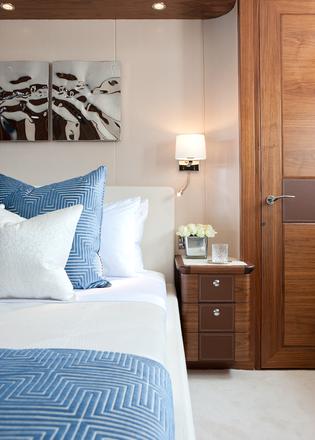 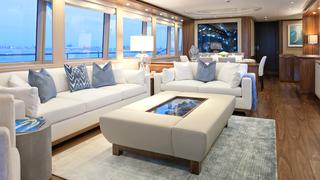 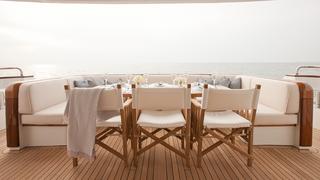 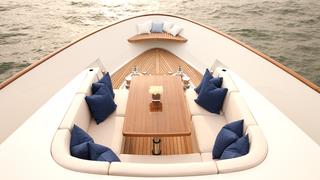 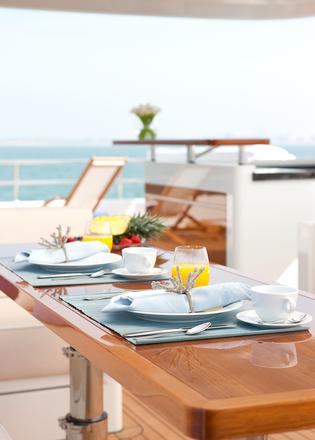 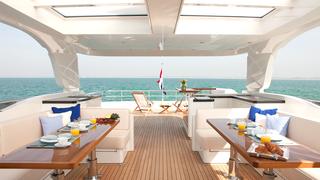 First on board: Firefly is a gentleman's motor yacht designed to go far

Boat International is the first to get on board the new Mulder 94 Voyager for a test run, and we bring you this exclusive on board yacht report of Firefly.

Stepping on board Firefly, the new Mulder 94 Voyager, and it's immediately apparent this 28.65 metre motor yacht is a thoughtfully designed, scaled-down superyacht and not just a scaled up flybridge cruiser.

"I didn't want a fast-planing, big motor cruiser – other manufacturers are already doing that," Andrey Lomakin tells me. Lomakin is the CEO of West Nautical, the company behind the brand new, aluminium Mulder 94 Voyager, and West Nautical is (amongst other things) the main Fairline distributor for France and Russia. With fast flybridge planing boats comprehensively covered in its offerings, Andrey Lomakin commissioned Mulder to build a craft that looked and felt like a proper motor yacht.

"This is a classic gentleman's yacht designed to go far rather than fast, and to offer a warm homely environment and unlimited comfort for the owner and his family and guests," says Andrey of the new yacht, named Firefly.

But Firefly, currently available for sale, isn't just any pocket superyacht. With ship-like comfort and design from a team of seasoned pros, the Dutch-built Firefly stands out from the pack.

"Our aim was super low noise levels with a maximum of 65dB(a) anywhere within the boat," said Andrey Lomakin. "We ended up with less than 60dB(a) throughout the entire accommodation at cruising speed".

I'm sat in one of two super comfortable Recaro chairs at the lower helm next to Lomakin as we leave the protective shelter of Marina Scheveningen and punch into the teeth of a large rolling swell, and I have to admit, it is very quiet. But what's really impressing me right now is the spray management. Despite hitting the short steep rollers head on, the expected deluge of water across the triple screens just isn't happening – the spray being sent out low and wide by the ship-like high flared bow with its two pronounced knuckles.

Ship-like is a good description for the whole yacht, in fact. Designer Frank Laupman of Omega Architects, who is responsible for Firefly's exterior design, takes up the story.

"From the very outset, the aim was very clearly to create a semi-displacement gentleman's motor yacht designed for comfortable, long distance cruising. The high bow with an S-curve to the gunwale lends the yacht a classical timeless profile, and we pulled the overhangs out to the maximum to increase volume".

The exterior design of superyacht Firefly

Yet despite the obvious beam and height the design cleverly avoids bulkiness courtesy of carefully radiussed contours. "We used a lot of curves and gentle radii, for example, at the stern we've built in a recess to take the name, which visually breaks the height," says Frank Laupman.

The result is a very "cab forward" main deck. The wheelhouse where I'm sat feels almost at the front of the boat offering great visibility, if exaggerating vertical motion a little whilst head on to the swell. As we peel off to port, putting the boat beam on, rolling motion is virtually non-existent however; stabilisers, each almost two metres square, keeping the boat rock steady.

We're cruising at a very comfortable 12 knots at which speed the twin 1,150hp Caterpillar C18 diesel engines are consuming a mere 140 litres an hour to swing big propellers through 3:1 reduction gearboxes, keeping noise and vibration to a minimum.

The interior of motor yacht Firefly

A "voyager" in more than just name, this vessel, with naval architecture by Vripack, is all about distance – drop back to eight knots and the 17,000 litre fuel capacity stretches the range past 4,000 miles to give transatlantic reach. It's a yacht designed to be used then – even the bow and stern thrusters are high spec at 40hp apiece.

But it's a yacht not merely designed to be used, but one designed to be used in great comfort. Head back from the wheelhouse past the day heads and galley and you'll find a massive saloon of over forty square metres – comparable with yachts a class or two above. And that scaled-up feel is across three dimensions, even the headroom is enormous at nearly seven feet. "We wanted the yacht to be homely; friendly' says Lomakin, "so there are no sharp edges or angles and plenty of deep comfortable seating".

The interior styling is by John Vickers, who has recently gone out on his own after a career working with Terence Disdale and Redman, Whiteley, Dixon. Vickers said his brief for Firefly was simple, "I was asked to create a clean interior inspired by the sea".

He's pulled this off with aplomb, combining restful satin finished American walnut and white oak decor with intriguing details like the backlit dark blue resin art or the gently illuminated rare coral that is glimpsed through the glass centre of the skate skin topped dining table.

"I aimed to create a feeling I have called 'relaxed luxury seascape'," said Vickers, "and to give a unified aesthetic appeal throughout, linking the interior and colours to the oceans the yacht was built to discover."

The unique backlit blue resin panels were sourced by Vickers Studio, made by artists working in London's East End, while the backlit coral inlay dining table was a custom job. Rare white corals sit beneath glass that's supported by a polished stainless steel frame, "at night these are backlit to create a beautiful glow through these amazing natural artworks," John Vickers said. According to Vickers, the rare corals have been ethically sourced.

Other bespoke art found on board includes rippling steel work commissioned by sculptor Rado Kirov. His seascape inspired pieces are found in the owner's and VIP staterooms.

The full beam master suite – separated from the engine room by 140mm of sound shield – offers 24 square meters of real estate lit by the largest portholes RINA classification would allow. Further forward, you'll find guest cabins port and starboard – twin beds in each motoring together to create doubles if required - and the VIP guest cabin at the bow. All are, of course, en suite; the bathrooms tastefully half marble lined and sporting classy Grohe faucets and Villeroy & Boch basins.

Out on deck, that ship-like theme is further cemented by massive teak topped bulwarks elbow high in places that eradicate the need for pulpit rails. They lead to a large forward cockpit just ahead of the wheelhouse. The upper deck reaches back almost to the transom and stretches over the side decks to create yet more acreage. The hard top is a nice touch.

"I didn't want the complexity and weight of an opening section that never gets used," Andrey Lomakin says, "so I kept it fixed but had translucent panels fitted to let light through".

It's typical of the thought and attention to detail that has gone into every aspect of the vessel.

"Andrey is extremely experienced," says Frank Laupman. "He understands yacht equipment, functionality, handling, and visibility – and his input stretched into every detail. He had a very clear idea of what he wanted, and I think we have delivered it".