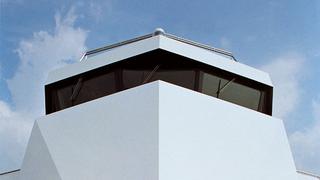 The warship-like looks of the 58.5 metre Izanami (now called Ronin) have the power to take you aback even a decade and a half after she was built. By returning to first principles and employing a civil architect, the Japanese owner of this stark grey and white yacht – more naval patrol boat than superyacht – created not only a unique vessel but also one that works.

Sir Norman Foster’s first yacht commission began with a blank sheet that seemed to offer limitless possibilities – until the vagaries of the sea poured cold water on any overly imaginative flights of shore-based fancy. The immutable rules of shipbuilding are strength, safety and seaworthiness. The superstructure of Izanami, for example, is normally an integral part of the hull’s strength, but Foster’s idea was to take the flexible body of an insect as his cue: the ‘head’ containing the brain (the pilothouse) and the ‘thorax’ and ‘abdomen’ subsuming the more visceral parts of the boat. And underpinning this organic form is a structure to prevent flexing in a yacht that was to achieve over 30 knots in trials. The hull was designed by the late Gerhard Gilgenast on patrol boat lines, a semi-displacement form with a deep V flattening to a zero deadrise stern. Models were tested at Vienna Model Basin before a final decision was made to press the button on the CAD/CAM process and produce the aluminium plates for the five watertight sections that make up her hull.

The Lürssen shipyard, with its military expertise and discipline, was the ideal yard to build this most warship-like of private yachts, whose parameters include a guaranteed maximum speed and a range of 3,500 nautical miles at 18 knots. Izanami's MTU 5,875hp diesels hum in polished splendour in an engine room that is fully monitored and certified as an unmanned machinery space, while her ABS classification means she is qualified for unrestricted service.

Performance like this comes at the cost of an interior that had to weigh no more than six per cent of the total displacement, or 22.5 tonnes. The solution by Bremen furniture maker Möbelfabrik Warring was to provide a honeycomb core in virtually every flat surface in a boat whose interior had the advantage of being wilfully minimalist from inception. The decorative scheme of Izanami features white painted furniture, pale upholstery and natural fibre-covered floorings: sunny, chaste and serene. The placid, eastern ambience seems to match the no-nonsense military exterior – defined by angles and facets, like those of a grand origami. Indeed, uncluttered spaces and an absence of frippery distinguish Izanami from her more frivolous contemporaries, for which no gaudy excess is too much. Less is most definitely more in a yacht that has external confidence derived from an owner’s clearly defined brief, a designer with no preconceptions and a builder well used to meeting the most stringent of targets.

Over many thousands of miles, across every ocean, this greyhound, has proved herself beyond expectations. Although launched over 20 years ago, her greatest accolade is that she could have been launched only yesterday.