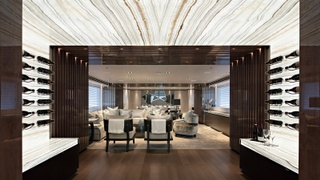 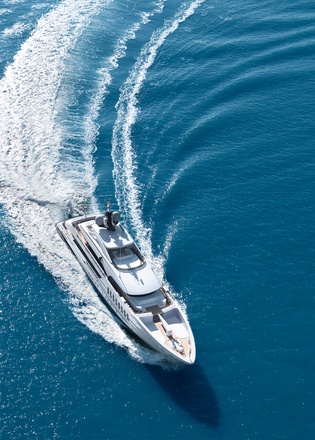 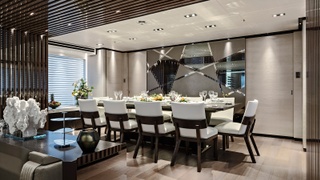 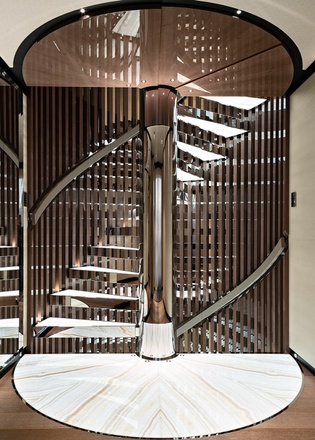 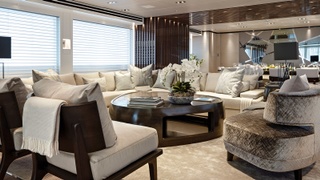 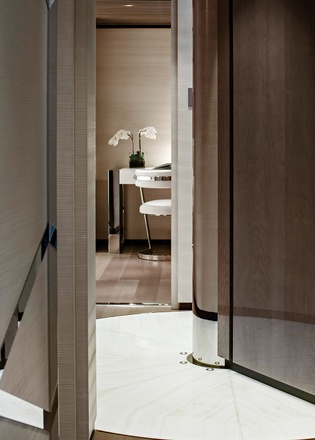 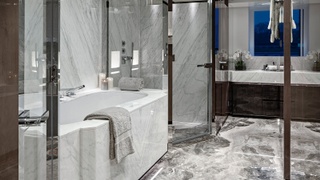 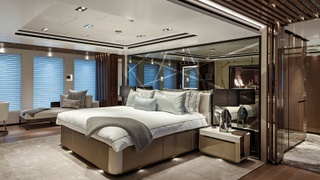 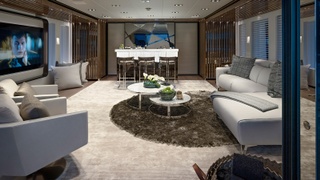 Inside the design journey of the 55m Heesen Vida

A keen fisherman wanted a mothership for his sportfishing fleet – so he landed a 55 metre Heesen and made the interior his own, says Marilyn Mower

Brooks Smith is a tournament fisherman so passionate about the sport that he keeps fishing boats in both the Atlantic and Pacific oceans. His custom boats – all called Uno Mas – are usually towards the top of the leaderboards at major billfish tournaments. Smith has strong opinions about sportfishing boats: that they should be cold-moulded wood and shouldn’t be too big; 21 metres is about the largest he believes can be nimble enough to catch a very large fish.

The problem is that accommodation on that size of sportfishing boat is limited, so he and his wife, Maria, are relegated to shoreside hotels or villas for tournaments. “In 2012 I realised the thing that would suit me was to have a mothership large enough to live on and with enough tankage to refuel my fishing boats on location or on delivery,” Smith says. “I looked around at the typical commercial-type motherships that seemed available, but I just couldn’t see myself on a converted crab boat.”

His first mothership was Viva Mas, a 37.8-metre 2008 Broward that held more than 41,000 litres of fuel. It worked as a fuelling station, but Smith began to “dream of cruising around the world” to places his Broward couldn’t reach. He went to the 2016 Fort Lauderdale Boat Show with the goal of finding a bigger boat that stayed under 500GT. “Instead, he ended up on [Heesen’s 70-metre, 1,130GT] Galactica Super Nova, twice,” says Thom Conboy, Heesen’s sales director in North America, Mexico and the Caribbean. Long story short, after looking at a 47-metre Heesen that would have kept him under 500GT, Smith signed a letter of intent in December 2016 for a 55-metre fast displacement steel yacht with more outside space and greater tankage that was already well along in construction.

Within a few months of meetings about customising his yacht, however, Smith realised there were a few things about the boat that just didn’t fit. “Some boats are pretty, but they just don’t work [for me].” Smith was able sell his slot and step into the next 55-metre Hessen had under way, one that he could customise to a greater extent. “I dove right into that project, making modifications to the interior. I have designed all three of the custom sportfishermen I have now – a 77ft [23 metre] Willis and 68- and 60-footers by Bayliss. It’s something I enjoy.” The original plan for Project Antares – a spec project with an interior by Francesco Paszkowski – had a garage forward on the main deck for two large tenders accessible through gullwing doors. Since Smith would use the yacht most often in tandem with his sportfishing boats, large tenders were not a requirement. What he wanted was a larger master suite.

That request barely caused a ripple, according to Peter van der Zanden, Heesen’s general manager of design and development. Without scrapping any major structure, they created stowage on deck for the tenders with storage below for water toys and moved the cabin’s forward bulkhead two frames toward the bow, adding a vertical window on each side. The resulting suite is 80 square metres, with additional dressing room and wardrobe space, plus sufficient floor area for two chairs and a table under the nearly full-height windows on starboard and for a divan and a vanity on port. A king-size bed on centreline is under a trayed ceiling that creates a modern canopy effect, contrasted with a darker gloss wood overhead treatment along the windows. With its planked oak floor, the room gets a cosy on-trend vibe enhanced by a neutral palette of taupe, beige and grey.

The full-beam master bathroom continues the contemporary style with polished stainless steel, glass, dark high-gloss wood and two different stone surfaces in an identical colour palette. “The stones had already been chosen and delivered to the shipyard but had not been cut and I was able to arrange the placement to highlight the design,” says Elmar Benavente of BE Design, based in Boca Raton, Florida.

Vida, as Project Antares would become, is Benavente’s first yacht, but he had worked with the owner on buildings and residences and knows his tastes. “I happened to be at the office on a Saturday and Brooks called me and said he was in a design meeting about a boat he was building,” Benavente says. “He asked me to grab a bunch of material, wood and carpet samples and hurry. I arrived and there were all these people sitting around the table and as I started pulling things out of the box he says: ‘Finally, here is someone who understands what I want.’ That was my introduction to yachting.”

Working to transform the interior motif created by Paszkowski and Margherita Casprini, BE Design’s task was to tone down and warm up the joinery and surfaces in the original package

“I like contemporary, but not a white, minimal contemporary,” Smith says, describing his taste as “kind of Colorado contemporary”. Working to transform the interior motif created by Paszkowski and Margherita Casprini, BE Design’s task was to tone down and warm up the joinery and surfaces in the original package. When Smith balked at teak, Benavente suggested oak stained a deep taupe tone and with a mix of gloss and satin finishes to create interest. The signature design element is high-gloss wood battens laid in a vertical grid over other surfaces like mirror, fabric or lacquered wood. Its peek-a-boo effect creates interest and movement and can be used to imply separation in large open areas such as the main saloon, where the battens run up the wall, across the ceiling and down the other side. The slatted theme repeats in the leather-wrapped window blinds that cast a matching shadow pattern across the floors and furniture.

The same technique dramatises the three-deck circular staircase at the centre of the yacht where it acts as a foil for the polished steel centre column and reflective surround supporting floating, backlit white onyx steps. On a yacht designed for relaxation, it is one of two high-glam spots that give it unique character, the other being the wine display walls of backlit onyx at the entrance to the saloon.

Timmo Elliott, who served as the owner’s interior project manager during the fit-out, calls this the show-stopper. With the saloon entrance narrowed by air ducts and a stairway to the engine room, Benavente chose to wrap the space in boldly patterned and backlit onyx to display wine bottles that float off the wall courtesy of some clever spring-tensioned holders. Considering that the display is not chilled, it’s safe to say the vintage Dom Pérignon won’t be stored on the wall, but the effect is entertaining and welcoming – just what an entrance needs. The entry opens on to a saloon that, although it is the boat’s most formal space, is still shoes-off comfortable with chunky, modern furniture upholstered in soft chenilles.

Elliott, whose superyacht CV includes 87-metre LürssenAce and 100.8-metre Kusch Yachts IDynasty, made myriad on-the-spot decisions and helped finesse the impact of commercial certification on Benavente’s design. He also enhanced the yacht’s functionality from a crew perspective, increasing the number of washers and dryers and adding space for air-drying clothes, plus separating the laundry from the crew mess. Lower deck accommodation – four double cabins and a full-beam VIP – is relaxed and carries the same design and colour scheme as the main deck. The twin berths can be transformed into doubles by the crew in just a few minutes. For ease of service, a hidden passage links the crew area with the guest corridor.

The bridge deck, with its upper saloon and outdoor dining area, is likely to be the prime hang-out space, and with this in mind, the pantry on this deck is larger than most. A dumb waiter links it to the galley below to facilitate service, while a 75in television and a large backlit onyx wet bar signal “man cave”. In keeping with his passion for fishing, the owner had three large outdoor tables made for the boat by Release Marine, a premier US builder of fighting chairs.

The only thing missing from the mothership’s wish list was Maria’s pool and waterfall. While an entire pool and its related dump tank could not be accommodated at this point, Heesen found a way to locate an unusually large spa pool on the sundeck and framed it with a waterfall feature. With another large wet bar flanking movable chairs and sun loungers, the sundeck can be turned into party central at dockside and, as such, it is fitted with an RGB computer-controlled light system that can dial up any colour imaginable.

Sundeck is almost a misnomer as a large hardtop shades most of the spa pool and seating area and the underside of it features a fibre-optic array of constellations to twinkle overhead. Heesen customised the space by raising the entire hardtop structure six inches to accommodate the owner’s height; it’s a design feature Heesen is thinking of retaining for the next yachts in the series, at least one of which will carry the upper saloon full beam, which, with the tender garages, will add 20GT to the volume calculation.

Of course, Vida won’t always be a mothership. For days when it’s all about cruising with guests, she boasts a large gym in the stern instead of a beach club, although considering its dayhead, shower and dive locker, with the stern door open to the wide bathing platform, it will function much the same.

Vida is more than just the successful and fast completion of a semi-custom yacht. She is Heesen’s first yacht to be Tier III compliant. The package was designed by MTU and uses a Hug exhaust system to reduce NOx emissions, which makes her name Vida – which means life – the perfect fit.