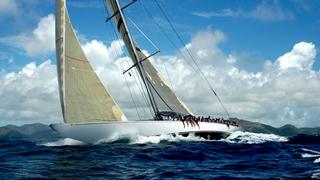 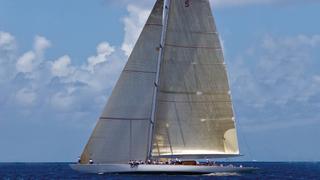 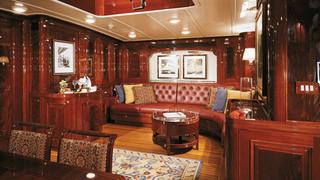 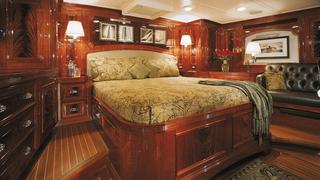 Ranger is the first J Class yacht to be built since their heyday in the 1930s, and truly she is a thing of beauty. When John Williams, an American property tycoon, chartered the J Class yacht Endeavour in 1999 he saw the transom of Ranger displayed in the saloon, and that set him on the path to rebuild her. Of course there was nothing left of _Ranger _to rebuild (other than the transom) because she was broken up for scrap in 1941, so he had to start from scratch, using the original plans as a basis for the new build.

Calling on naval architect Paolo Scanu, whose family had owned Shamrock V for many years and whose father had looked into rebuilding Ranger himself, and Bill Sanderson as project coordinator, Williams set out to recreate Ranger. Many of the team had worked with Williams before.

Built in steel to maintain tradition and compete seriously with the other J Class yachts, _Ranger _conforms to the original yacht’s length and proportions, as designed by Starling Burgess. The only adjustment to _Ranger’s _hull lines was to add four extra inches to her freeboard. The J Class Association approved this modification in recognition of the extra weight imposed on modern yachts by comforts and machinery (and regulations) not envisioned in the 1930s.

Glade Johnson, the interior designer, is known for his meticulous attention to detail and insistence on quality of workmanship, and had to deal with restrictions placed on him by the yacht’s weight, as well as the acoustic engineers. Like other restored J Class yachts, the team decided on a deck house rather than the original flush deck of the day racers. A single deck house with an open helm station on deck was settled on, rather than the steering cockpit and two deckhouses of Velsheda. These are built with a carbon-fibre core, covered in varnished wood, as weight-saving was of paramount importance.

Modern conveniences caused a problem not just in terms of weight. The yacht was to be built with all the comforts of a modern motor yacht, and reconcile the equipment of a 136-foot sailing mega-yacht in just over half its beam. The eventual length along the water line became 91 feet – just longer than the original, and again at the very limit of what was allowed. Every weight-saving avenue was explored, from thinner pipes to plastic plumbing.

Danish Yacht, located at the northern tip of Jutland, seemed an unlikely candidate to build Ranger, but it ended up being a god-send as the price of materials in Denmark forced the builders to be more efficient and cost-conscious. Like the original, Ranger was not a money-no-object yacht, but rather one where money was spent judiciously, where it needed to be.

Another Danish company, Modus, produced more detailed interior drawings based on Johnson’s design concepts. This lead _Ranger _from Denmark to Sardinia, where the joiners created a meticulously-crafted interior. When weight concerns once again reared their head, the acoustical engineers, J & A, suggested a high-tech solution – to ‘float’ the raised panels of Johnson’s interior on a thermo-plastic honeycomb foam.

Like the original Ranger, the team pushed boundaries in terms of technology and speed. While appearing very similar to the original sail plan, aluminium and cotton were replaced with carbon-fibre, Mylar, and Kevlar. And, like the original builders, a premium was placed on weight-saving. With modern technology, the rig could be made both safer and lighter than on the original J Class yachts, while enabling the new Ranger to be handled by a smaller crew in cases such as chartering. The solution was a combined runner checkstay system, with the mast stiffened even more by raking back the spreaders.

Again moving around the world, Ranger’s construction drawings for her steel hull and deck were assigned to Fred Elliot, a designer in London. His task was made more complicated by the fact that Ranger was to be built to meet Lloyd’s and MCA requirements. Every stage of the process was subject to inspection by the agencies.

Back in Denmark, the yard at Danish Yachts had a subcontractor build the hull in two sections – the topsides and deck as one unit, the bottom and keel another. Project Manager Don Tracey described the moment when the steel parts were married-up as ‘an anxious moment’, but the gamble paid off, with the entire hull finished with pin-point accuracy.

Simultaneous to the work going on shaping Ranger’s interior and body, Nancy Williams in the USA worked with Glade Johnson to select her ‘soft materials’. A beautiful interior was created by varnished wood panels and the lush fabrics of furnishings and rugs.

The finished boat is absolutely stunning, and a wonderful tribute to those beautiful sailing yachts of the 1930s. In the words of John Williams: ‘Ranger is a little bit history, a little bit art.’ And you can’t argue with that.

All photos courtesy of Dana Jinkins