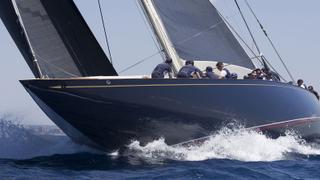 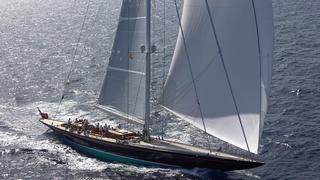 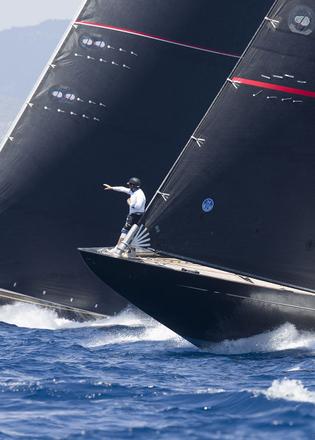 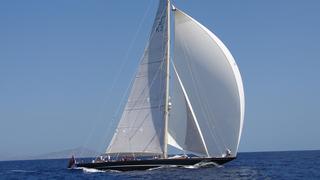 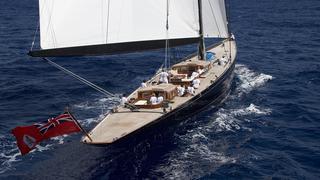 The Rise of the J Class Sailing Yacht

J Class yachts drew gasps of admiration in their 1930s heyday. Eighty years on, they still do.

Nearly 20 years ago, I remember crunching along the shingle to Hurst Castle, jutting far out into the Western Solent, for a glimpse of three huge sailing boats as they fought the ebb tide. It was 2001, the 150th anniversary of the America’s Cup, and the three yachts were Endeavour, Shamrock V and Velsheda – the last of the original J Class. I stood with hundreds of others transfixed as the boats hammered past into the Solent on their way home to Cowes.

Built to contest the America’s Cups of the 1930s, these Js were designed by legends such as Charles Nicholson, Starling Burgess and Olin Stephens. Their names were bywords for romance and luxury; their owners celebrities.

But such is their capacity to entrance, these 36-metre to 43-metre sloops, with their giddy overhangs fore and aft, have actually grown in number since 2001. Today the fleet numbers nine yachts, with a further two on the drawing board. And, if you’d been lucky enough to be in Bermuda in mid-June 2017, you would have seen seven of these magnificent boats vying in the America’s Cup J Class Regatta. “The class has grown because of its incredible history of racing and the America’s Cup – and the sheer beauty of the boats,” Velsheda’s owner Ronald de Waal says. “Sailing on one is an incredible experience and the racing is equally exciting.”

And yet despite its resurgence, the J Class story owes as much to mud berths and rusting hulls as it does to regattas and billionaires. The US fleet was scrapped for materials after the outbreak of the Second World War, but three heavily built British Js survived. As America’s Cup challengers, they had to cross the Atlantic Ocean on their own bottoms to take part. Velsheda spent entire decades holed up on the Hamble, Endeavour was rescued from the scrapyard, while the wooden-hulled Shamrock V was cruised in the Med.

The tide turned fair again for the J Class only as recently as 1984, when American sailor Elizabeth Meyer bought the hulk of Endeavour and set about restoring her. “Elizabeth is very much the catalyst for the revival of the J Class with the renovation of Endeavour in 1984,” Philip Lotz, commodore of the New York Yacht Club, said in 2017. “Her vision and inspiration… got restoration going not only for the J Class but for all classic yachts.”

Meyer was nearly overwhelmed by the task; it took just two years to make Endeavour seaworthy enough for towing to the Royal Huisman yard in the Netherlands. She famously said that 98 per cent of her net worth was tied up in Endeavour by the time she sailed again in 1989.

Meyer was also the person responsible for refitting Shamrock V in 1989 and that summer, the first J racing of the modern era captivated spectators from Maine to Maryland. At first it was an amateur affair, with crews recruited by skipper Gary Jobson. “We sent forms out to 200 sailors he knew and we ended up with 600 replies,” Meyer recalls. “Sailors were Xeroxing copies and sending them back to us. I told Gary, ‘Well, we will just have to run a lot of regattas.’”

The admiration that had made the J Class and their owners front-page news in the 1930s was as strong as ever. “The J Class boats seemed to be worshipped everywhere,” Meyer says, “venerated like a mix of what might be expected for a film star or something like the Eiffel Tower.”

Velsheda was next in line for a refit and the three Js raced side-by-side for the first time at Antigua Classic Week in 1998. By now the late John Williams, an American property developer, had initiated work to build a replica of the Sparkman & Stephens-designed “super-J” Ranger. Harold Vanderbilt’s original had all but dismissed the challenge posed by Sir Thomas Sopwith’s Endeavour II in the 1937 America’s Cup, and was considered among the fastest Js.

With new boats being built, ground rules were urgently needed to keep the racing fair, and so in 2000 the J Class Association was born. Its first and most important rule was to restrict new J Class yachts to existing lines plans from the 1930s – something that instantly limited their number to 22 hulls. “Not all of the original lines are interesting,” says Andre Hoek, the noted naval architect who was involved in updating the designs for the build of Lionheart, Topaz and Svea. “There are nine boats in the water, and probably only five or six more of interest.”

Then performance limits were determined to prevent extreme design. “You have to maintain the original freeboard and the rig geometry,” Jeroen de Vos, naval architect at Dykstra, explains. “And new boats have to have a functioning interior. You don’t want a situation where the old boats become obsolete.”

The only major concession has been to allow lighter hulls built from modern aluminium and other materials, instead of the original Tobin bronze or steel and timber, and the rudder shape can be modified. But most of the magic happens from the deck upwards. All the boats sport top-of-the-line carbon sails, carbon spars and hydraulics that can put up to 35 tonnes of tension into the headstay. It’s a huge contrast to the 1930s, when the 50-metre masts were prone to tumbling over the side in anything more than a force 3, so stretchy was the rigging of the day.

Regular refits keep today’s Js at the leading edge of new technology. “We have the chance to play with all of it, and the level of the other teams constantly pushes us to do more,” says Velsheda skipper Barney Henshaw Depledge.

In 2016, Southern Spars shaved an impressive 800kg off Hanuman’s rig weight by using super-thin carbon laminate and ECsix rigging. That’s the equivalent of removing 10 crew members sitting on the second spreaders. “The mast specifications nowadays are expected to be in the same ballpark as the most modern race yachts,” says Steve Wilson, senior designer and co-founder of Southern Spars.

Just as important is a clean deck plan that favours communication between the 30-plus racing crew and facilitates sail changes. “Deck layout is a huge part of it for being able to pull down headsails of 450 square metres and kites of 1,000 square metres,” de Vos adds.

Using an algorithm to predict performance, each hull is rated accordingly – but with only minute differences separating them, the Js are more akin to a one-design fleet. “The racing is very close – it’s won on seconds,” says de Vos. “Because the boats are so close, if you cross the line ahead, you’ve basically won.” This draws some of the world’s top sailors, from Volvo Ocean Race veteran Bouwe Bekking (tactician on Lionheart) to two-time America’s Cup helmsman Ken Read (Hanuman and Topaz) and a host of young talent.

Off the racecourse, the Js have a different appeal, with lavish panelled cabins, marble-lined bathrooms and cosy deckhouses. “The boats are quite deep in the water and therefore are very comfortable below,” de Waal says of his beloved Velsheda. “There is a lot of deck space as well. You can enjoy very relaxing and quiet moments of cruising with your family and friends.” Some of the boats charter, too, with prices starting from $65,000 (£50,000) per week.

Perhaps the last word about the J Class should go to its modern-day saviour, Elizabeth Meyer. “We love them because they are sublimely beautiful, utterly impractical and fiendishly demanding.” And that, in a nutshell, is it.