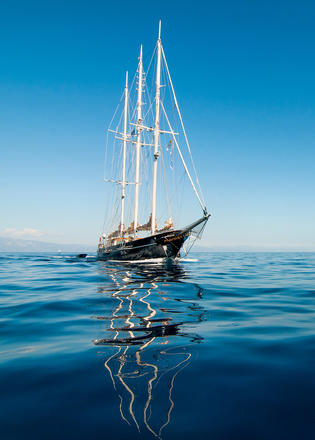 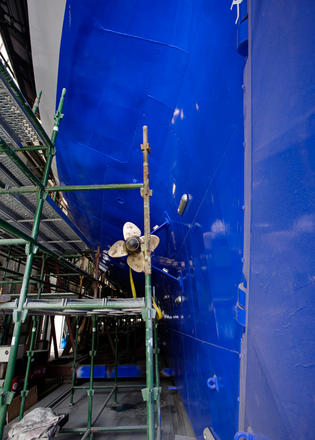 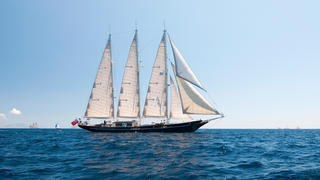 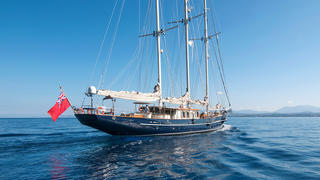 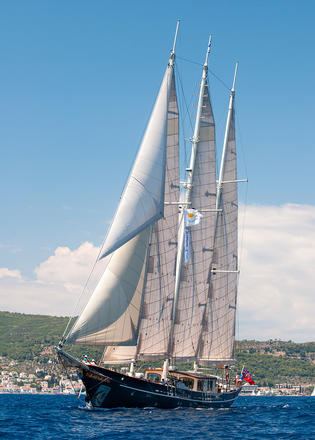 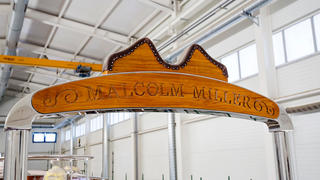 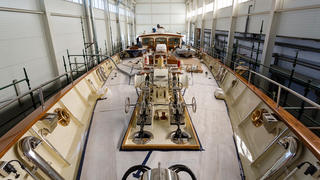 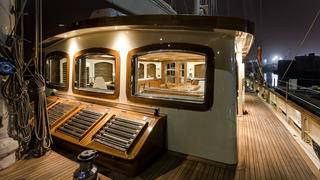 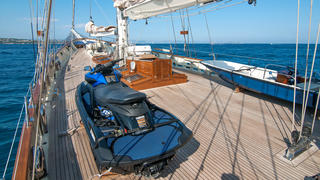 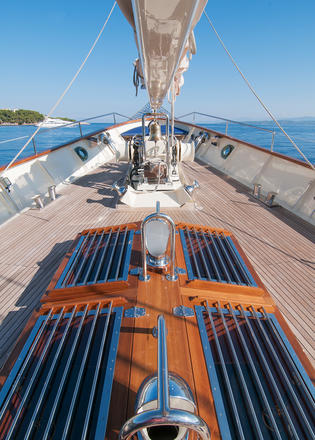 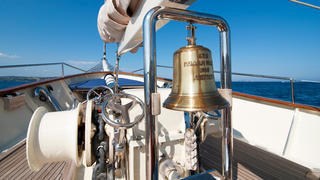 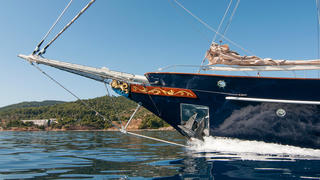 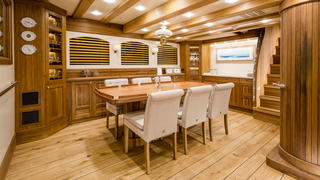 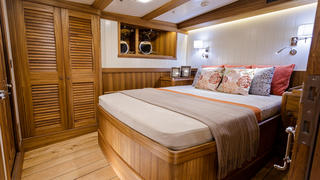 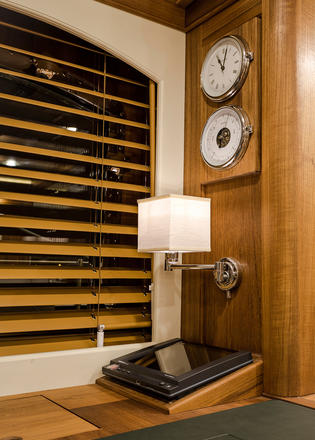 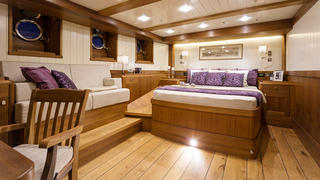 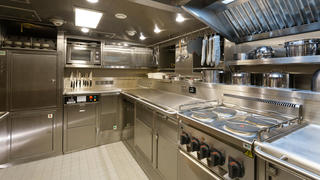 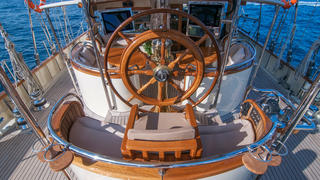 Malcolm Miller: The abandoned ship reborn as a sailing superyacht

Found derelict on Cornwall’s River Fal, the 45.67 metre schooner Malcolm Miller has been transformed into a classic superyacht worthy of her historical past.

It’s a dreary winter’s day in Plymouth on the south coast of England, the kind of day when the world itself seems drained of colour. But at the end of the marina on the outer berth, a deep blue hull topped with bright varnished wood gleams rebelliously against the gloom.

The schooner Malcolm Miller sits snugly at the dock, making a homecoming of sorts. She has returned to the British waters where she was born and spent her early life as a tall ship training boat. It’s been a long journey to get here, filled with numerous private owners, half-hearted refits – even a fire – and finally, the thorough rebuild that sees her lovingly restored today.

Launched in 1967 in Aberdeen, Scotland, by John Lewis & Sons to designs by Camper & Nicholsons, Malcolm Miller – sister ship to the Sir Winston Churchill – is one of the original three-masted topsail schooners used in the 1960s by the Sail Training Association, now called the Tall Ships Youth Trust.

Malcolm Miller is back in Britain briefly after a refit in Poland so that the captain, cadets and crew from her former sail training years can see a friend they long thought dead and buried. For years after the 2008 fire the whereabouts of this British superyacht were folklore, and rumours of her demise were bandied about until she was found derelict on the River Fal in Cornwall.

Despite the joyful reunion, Malcolm Miller isn’t in Plymouth for pomp and circumstance. Her new owner is anything but an exhibitionist. He has spent his life – and made his living – taking old things and breathing new life into them.

He and his son run a commercial refit yard among a variety of other shipping interests. He has also taken on the refit of smaller yachts for his personal use, including a Herreshoff design now in the US for a prolonged refit. “I like projects – I’ve been doing projects all my life,” he says. It was one of these projects that led him to Malcolm Miller.

Plymouth-based rigging specialists Allspars had been commissioned to install the masts and design the rigging for a ketch under way at the owner’s commercial yard in Cyprus. When a rep from the company visited the yard, he thought he might have found the perfect fit for a bigger project, one that Allspars had started the rigging for but had been abandoned.

“He came to me and said, ‘You know, there is a project that would be up your street. There’s an abandoned yacht, the Malcolm Miller, in Falmouth.’ He thought I might be interested in saving her,” the owner says. Having some knowledge of famous schooners, and tempted by a meaty project, he flew to see the yacht in her deserted state. But Malcolm Miller was in such poor condition after being ditched midway through a refit and laid up that he wondered if it was too late to help.

The owner’s son says: “There had been a small fire on board, and the previous owner had lost interest in the refit, so he strapped the masts to the top of the deckhouse and bought another boat. She was just abandoned there.”

The deck was rotting and the interior was flooded. The son and a friend spent three days bailing out the boat to determine her condition. In January 2012, the owner made an offer for the abandoned yacht, not much more than scrap value, and by February Malcolm Miller was in Gdańsk, Poland, for a refit at Conrad Shipyard, a subsidiary of Marine Projects Ltd.

The owner considered taking Malcolm Miller to Cyprus but his son thought this would put too much stress on their commercial facilities. The connection with Conrad and Marine Projects was a natural one as the Polish company has worked on some of the owner’s ships.

Pragmatically, it was much easier to tow Malcolm Miller to Poland. It was surprising, though, that in her badly neglected state she hadn’t already sunk. “You could poke your finger through the hull in some places,” the owner says. Nearly two tonnes of steel and the entire deck had to be replaced, frames and all. Marine Projects, which builds and fits out yachts, carried out the hull work while Conrad did the rest of the renovations.

Julius Strawinski of Yacht Studio Strawinski in Sopot, Poland, was hired to take on the design and naval architecture. The biggest change to the exterior of Malcolm Miller is the greatly reduced size of the deckhouse. It used to extend nearly to the full deck, its high, square shape designed to accommodate 40 to 60 cadets. In the owner’s opinion, it ruined the lines of the vessel. The new deckhouse is inspired by his favourite classic vessels, particularly the 55.3 metre Shenandoah, launched in 1902.

The purchase of Malcolm Miller “as is” included all the equipment the previous owner had stashed on board, such as the rigging, which was in good condition, fairly new hydraulic winches, and furniture, some of which could be salvaged. “We took what we needed, so that saved a little bit in the cost of refitting,” the owner says. But the budget soon tripled despite this, because what started out as a brief for a simple working boat turned into a luxury yacht project.

The owner’s previous “yacht” was a commercial tug that worked hard for most of the year and then became a family boat for trips. For Malcolm Miller, he envisaged a commercial grade vessel you wouldn’t have to worry about if you knocked the sides in port. “The idea was that I would make her into what I wanted, but not a luxury boat. But when we ended up [at Conrad] in Poland, obviously they were so good at it that eventually we had to give in and make her [the yacht] she is,” says the owner.

Conrad’s chairman, Mikolaj Krol, referring to the change to the scope of work, adds: “When Malcolm Miller arrived in Gdańsk, it was supposed to be a modest refit with a very low budget. [But] when you replace one thing with something new, at once a question arises as to why another element [should] remain old… and it ended with complete yachting standards.”

There might not be a better example of something positive coming from a build that diverges from the original brief – the result is simply stunning. Malcolm Miller is in every way practical, fitting the owner’s relaxed lifestyle, but her beautiful exterior lines and luxury finish make her an instantly covetable classic.

“I still don’t call it a ‘superyacht’,” the owner says with a laugh. “For us it’s a sailing boat; I’m going to use it as a sailing boat, not as a superyacht.” And use it he will. As both the owner and his son have commercial captain’s licences, they will skipper Malcolm Miller when they are on a planned circumnavigation.

Above all, the yacht feels like a home. You can tell Malcolm Miller was meant to log miles in comfort. The interior décor is understated, simple and elegant. All the furniture is teak but white panelling breaks up this prevalence of timber. The portholes are traditional, while cabin skylights open up with brass hand cranks that are good looking as well as practical. “We don’t like automations, it is just something to go wrong,” says the owner’s son.

Conrad mocked up the interior of Malcolm Miller, sometimes recycling the old furniture found on board to do so, and the very hands-on owner visited the yard monthly during the rebuild – sometimes every fortnight – for rounds of decision-making.

The new interior of Malcolm Miller is designed for 10 guests in an owner’s cabin, VIP and three guest cabins. The accommodation for six crew has original teak flooring, which, like the appliances, has been completely refurbished. The crew have their own deck access so that they don’t encounter guests.

Though Malcolm Miller makes excellent use of space, the owner agrees it is still a small yacht for him as most of his vessels are 70 metres long and a lot wider. Details from his commercial ships, such as the galley, were included in the design.

Commercial galleys are a lot easier to keep clean and a lot easier to use, says the owner’s son. The galley on Malcolm Miller is packed with commercial-grade appliances; such as a heavy-duty refuse compactor and dishwashers that take 60 seconds to wash a round of dishes. Deliveries from the galley are by a food lift.

The formal dining saloon on Malcolm Miller is traditional in its layout but casual in its use. The table expands to accommodate 10 guests, and a cabinet conceals a television. The folding dining chairs are easily transported to the deck for alfresco meals in the summer, which means that only one set of chairs has to be stored.

The entire project took nearly 15 months to complete, and the revived Malcolm Miller was handed over to her new owner in November 2014. Chris Blake, her captain from the tall ship years who advised on the refit, joined for the maiden voyage from Gdańsk. “He was impressed by her performance,” the owner says. “Though a very different boat, there’s still the same charisma and feel to her.”

On that maiden voyage, Malcolm Miller clocked 10.5 knots, with comfortably quiet performance. “You could not hear anything from inside,” says the owner’s son. She doesn’t heel much either, dipping to about 15 degrees and not much further. Father and son sailed her to Cyprus themselves, travelling 2,961 miles at an average of eight knots.

The owner says: “On the way down, we turned to each other and [my son] asked, ‘Was it worth it?’ And at just those moments when you are with family and everything’s going perfect and you have the wind in the right direction and the boat’s heeling over a little bit and you’re flying through the water – it’s worth it.”

First published in the July 2016 edition of Boat International