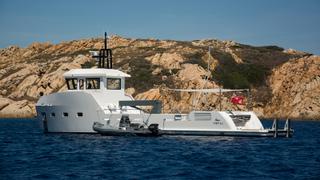 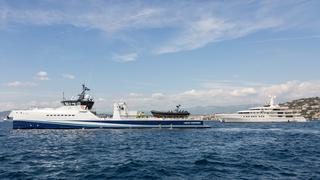 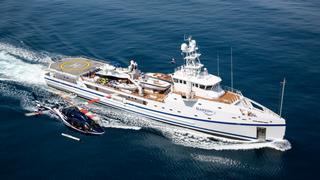 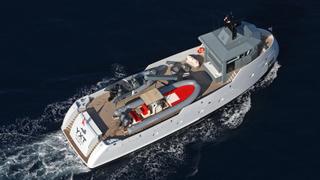 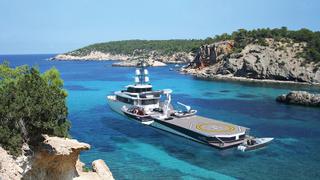 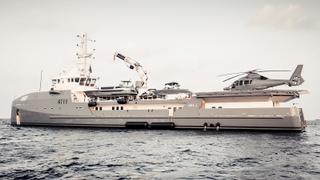 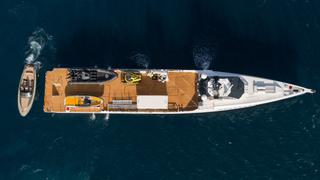 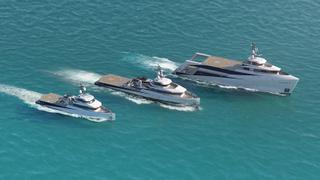 Me and my shadow: The rise and rise of superyacht support vessels

Wherever the Westport 164 Gigi went this summer in New England she caused a stir. She was accompanied by her new Damen support vessel, Axis, and residents in quiet ports from Massachusetts to Maine were confounded by the sight of the two 50 metre-plus vessels tied up together, one with a sharp axe bow and a long deck loaded with gadgets worthy of a spy thriller, including an Icon amphibious aircraft.

“People kept asking, what is this? You would think we just landed a space shuttle,” says Thom Conboy, president of Ocean Independence’s Americas office. In fact, when the Icon made its water landing, a concerned local called 911 to report what they thought was a crash.

While support (or shadow) boats have been garnering more attention lately — mostly thanks to Damen’s Yacht Support range — they are still a rarity. There are only about 20 worldwide, either serving a superyacht or awaiting an owner. But if you consider that seven of these were launched in the past two years, it’s clear that momentum is building.

For Damen, parent company of luxury yacht builder Amels, the impetus came from a well-known owner, Roman Abramovich. His fleet manager saw the need to augment his superyachts — including the then biggest yacht in the world Eclipse — and ordered two 50 metre offshore supply vessels adapted for their needs.

“We thought it was a good idea and introduced the concept at the 2009 Monaco Yacht Show when the vessels were in build,” says Victor Caminada, marketing manager for Amels and the Damen Yacht Support range.

“At the show, a gentleman walked up to me, looked at the scale model, and said ‘I love the idea, but my toys won’t fit’,” says Caminada.

“I thought ‘wow, it’s already a 50 metre boat with a deck of 30 by nine metres’. By the time we wrote the list of everything he wanted to take, the end result was the 67 metre Garçon, which we delivered in 2012.”

Garçon was the first Damen Yacht Support vessel. Since then, the yard has regularly unveiled YS models built on spec, which have found homes with owners worldwide.

In the early 2000s, Shadow Marine popped up in Fort Lauderdale, billing itself as the world’s first manufacturer to specialise in the design and construction of superyacht support vessels. It was responsible for several conversions of existing offshore vessels before the recession took its hit.

Today, two other builders, Lynx Yachts and Piriou, have joined Damen in looking for a slice of the support vessel pie. The founder of custom yacht builder Lynx Yachts, Slim Bouricha, is an experienced yachtsman who saw first hand the need for smaller yachts to have better tenders — the type only a 60 to 70 metre yacht could fit. His solution? In 2014 Lynx launched its Yacht X Tender series, stylish utility boats ranging from 20 to 40 metres that can carry tenders and toys and extra space for stores, fuel or something like a superyacht gym or galley.

Lynx is building its third now, with a fourth in negotiation. The Dutch yard has been attracting interest from clients who own 30 to 40 metre yachts. “In this size range, you really are limited in the tender you can carry on board and the owner may not want a bigger yacht that would have difficulties entering some marinas and shallow waters,” says Filippo Rossi, sales and marketing manager at Lynx Yachts.

French yard Piriou, like Damen, is a commercial builder, having launched more than 130 boats for the offshore industry, and it’s these that form the basis of its YSV range. Its concepts run from 40 to 63 metres, but can be lengthened to suit. One project on the drawing board is for a 100 metre vessel with an astounding 1,500 square metres of open deck for loading on the superyacht water toys and large tenders.

Piriou and Damen have similar philosophies on what makes the ideal support boat. First, it needs to be fast. Often left to collect toys after the mothership departs, this second-in-command should beat the primary boat to the next destination to unload everything before the latter arrives. It should also be versatile in its abilities and have a certified superyacht helideck. Finally, it must look good.

“When you turn up in a bay of superyachts, you are part of the show,” says Caminada. “You don’t want to be the ugly duckling. But at the same time it needs to be practical, so that not a lot of crew are needed to maintain her.”

A deck laden with toys may grab the attention, but the advantages of a support vessel also lie in the unsexy bits, such as fuel storage, workshop space, laundry, extra staff accommodation and refrigerated waste facilities.

Security is another consideration. The owner of a Damen YS6711 model (67 metre LOA, 11 metre beam) decided to paint his vessel military grey and name it after its model. With 6711 emblazoned on the side and fire-fighting water cannons visible on the top deck, it makes an intimidating sidekick when transiting the Suez Canal and Gulf of Aden.

Then, of course, there are the toys. Think submarines, seaplanes, dive centres, limo tenders, fishing tenders, and the helicopter with hangar and generous certified platform that doesn’t fit on a typical superyacht.

The concept makes sense, says Daryl Wakefield, president of Westport Yachts. He knows of three Westport 164s that run with a shadow. “It’s expanded real estate, it’s less wear and tear on the high-dollar [yachts] and keeps the clutter off the mothership.”

It also transforms a yacht’s capabilities. “My Girl, whose owner goes sailfishing all over the world, has been supported in the South Pacific by what’s primarily a fuel barge carrying 100,000 gallons of fuel,” says Wakefield. “They went to a lot of islands where the infrastructure to support a big boat just wasn’t there.”

As every superyacht owner’s needs vary depending on their interests and cruising programme, support boats are highly personal, which is why Piriou won’t build on spec. Damen’s business model has been to start them without a client, though. As the largest shipbuilder in the Netherlands, it has the means to do so and sell them for a price for which making some modifications still makes sense.

When Thom Conboy found buyers for two Damen YS 5009 models, he helped organise their modifications with Fort Lauderdale naval architecture firm Murray & Associates, which has become somewhat of an expert, currently working on its fourth Damen. One of these was Fast & Furious (now Axis), which made the rounds at the autumn boat shows last year.

Gigi’s owner is still getting to know the new addition to his fleet, but is already happy he chose two yachts over one. The two vessels total about 100 metres, he says. “A single yacht this size has many disadvantages when it comes to docking,” he continues. “You just can’t get into the smaller, shallower ports. We have a lot of redundancy in all crew departments; it’s like having a staffing agency cruising with us. And while all large vessels have spare parts, with our fully functional workshop on the support vessel, we are now repairing and fabricating those parts. Not much can stop us now.”

The maths makes sense, too. When you consider that a 50 metre mothership and 50 metre support vessel will together have half the crew complement of a 100 metre superyacht, you’re looking at considerably smaller operating costs. And on the big yacht you still wouldn’t get the deck space that a dedicated support vessel can offer.

“We have a submarine, seaplane, flats boat, WaveRunners, some sailboats, a custom dive and submarine tender and a fishing tender, all on the deck!” says Axis’s owner. “Move things around a bit and we’re landing a helicopter. Just the other day we tied together while at anchor, rolled the smoker and grilling equipment out on deck and had a fabulous barbecue. It’s like a small city with all the amenities in the remotest of locations. You can’t do all these things on a conventional yacht.”

In pictures: On board Damen Yacht Support Vessel 6711