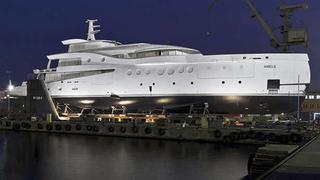 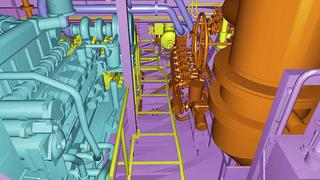 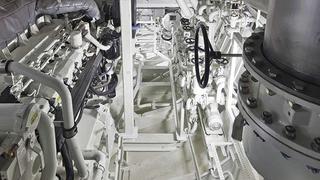 Midway through construction on superyacht Amels 199

The construction of the first Amels 199 has moved on apace since we first wrote about Tim Heywood’s scimitar-bowed design. Progress is running even better than expected according to Nick Flashman, a building captain of Imperial Yachts, the construction project managers for this project.

‘The whole process is going so fast,’ he says. ‘The hull construction was completed four weeks ahead of schedule. We took the boat out of the water in November and by end of December the hull had already been faired from stem to stern, with three or four coats of filler applied. It’s impressive how quickly it’s all coming together.’

This yacht will be quite different to the Amels 199 originally envisaged. Production on the first hull was already under way to the specifications laid down by the in-house Amels design team in conjunction with Tim Heywood. However, the owner wanted to make extensive changes to the layout, notably the addition of a touch-and-go helipad on the foredeck, an enclosed lounge on the sun deck, and a central staircase to connect all levels from the lower deck up to the sundeck.

Despite the steel already having been cut and the early stages of production well under way, it was still possible for Amels to accommodate these significant alterations, as project manager Adriaan Roose explains: ‘With almost 30 people working in the in-house design team, we put tens of thousands of man hours into the initial design and engineering plans for the boat.

‘This gave us a strong design base to work from, so when it came to customising the deckhouse and helideck, it only took us an additional 5,000 hours of design time to make these changes to hull No.1.’

This may represent a huge commitment of time to the design process, but Roose says that this high level of advance planning more than pays for itself later during the construction phase.

‘With a typical custom build, you design as much as possible up to a certain cut-off date, and then any further changes need to be made during the build process,’ he says. ‘That inevitably requires an element of re-engineering and working around existing problems that could have been avoided with a longer and more detailed design phase.’

Part of Amels’ design phase is to produce a sophisticated 3D model that integrates all the technical systems into the plans at a very early stage.

‘All the systems that go into the boat – the air-conditioning, the water drainage, hydraulics, electrics – every pipe is included at the 3D Cadmatic stage,’ says Roose. ‘This enables us to optimise the use of the internal volume and effectively create a larger, more spacious yacht for the owner to enjoy.’

An example is the centralisation of the Amels 199’s air-conditioning system into one space.

‘Most 60m yachts would have five or six separate AC spaces located throughout the boat,’ says Roose. ‘Not only does this take up a lot more interior space, but the maintenance schedule is much bigger. The feedback we’ve had from ship’s engineers and captains is that they really like one big piece of equipment in one space, and of course we’re helping maximise the luxury space in the yacht too.’