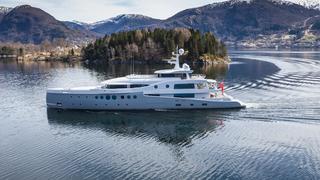 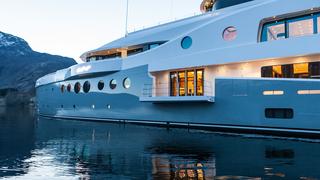 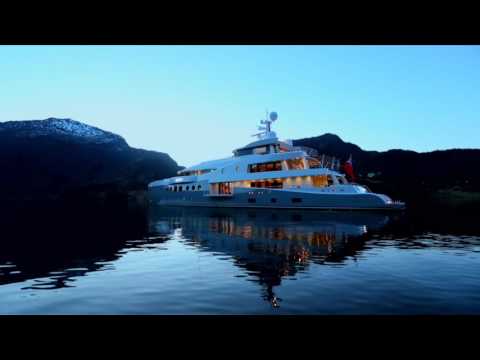 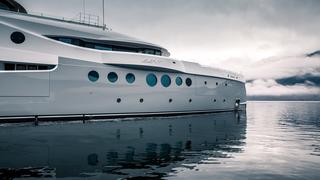 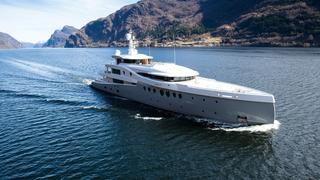 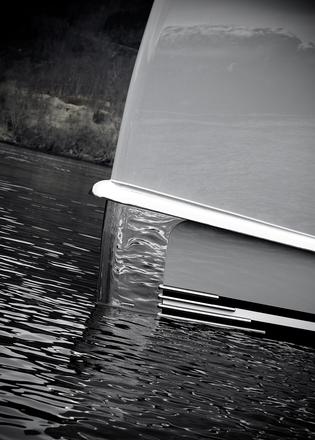 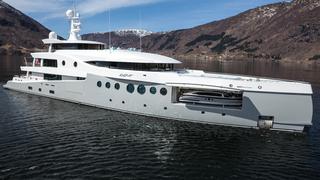 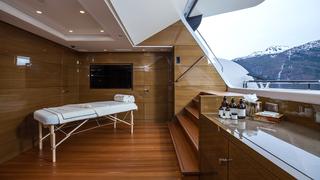 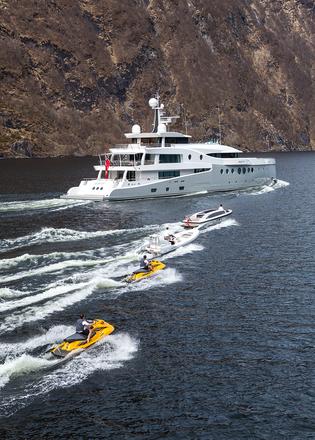 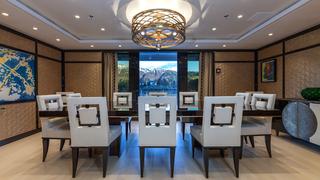 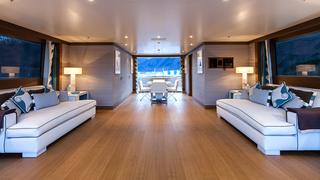 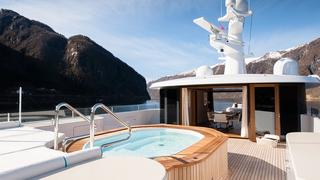 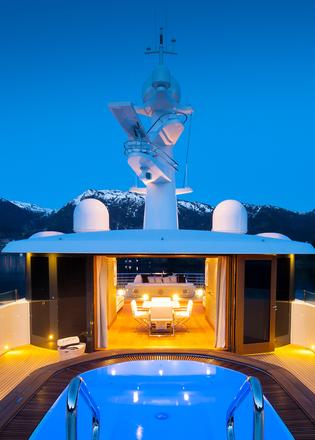 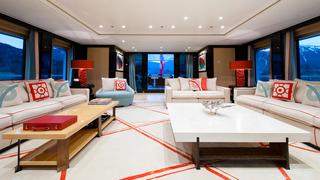 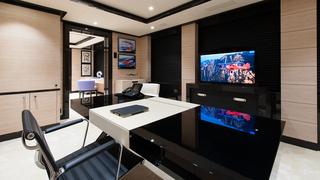 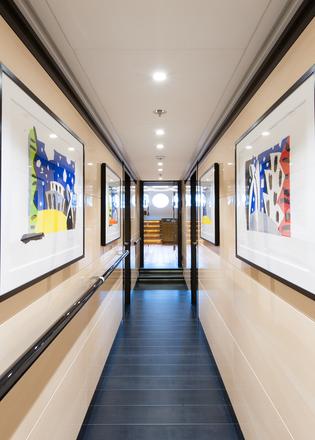 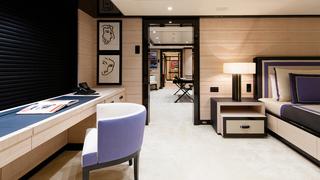 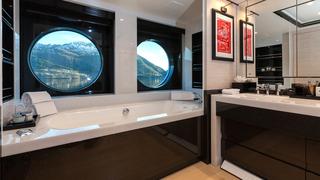 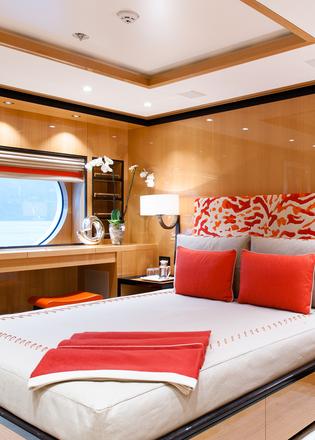 The Amels 199 Limited Editions superyacht Event is the result of extensive collaboration not only between Amels and yacht designer Tim Heywood, but also with the owner and with Imperial Yachts, who represented the owner as brokers and on going yacht managers, as well as consultants and supervisors during the design and build phases.

Event was so private when she launched that images of her interiors weren’t allowed to be published. Now, as superyacht Event is for sale, her striking interiors are being revealed.

Event is part of the Amels’ Limited Editions range

With 30 yachts sold in less than a decade, 23 of which have been delivered, it’s hard to deny the success of the Amels Limited Editions range. Introduced in 2005, the Limited Editions concept drew on several major selling points – exterior design by the world-renowned Tim Heywood, interiors by choice of the owner and a technical platform developed by the highly experienced Amels team in Holland, combined with two-year delivery times, customisable options and prodigious quality at an attractive price.

While the launch of the Amels 171 Deniki in 2007 hinted at what was to come, the arrival of a new model – launched in 2013 as the 60 metre Amels 199 Event – marked a distinct departure from the rest of the models in the range. Bold styling with a near-vertical stem, a forward tender garage, foredeck helipad and an innovative interior arrangement marked Event as a milestone not just for Amels, but for superyachts in general.

Key to Event’s dramatic entrance was her dramatic lines. “It was an interesting period in which to have a new design, and we wanted to push the envelope a little bit,” recalls Heywood. “I came up with a concept that had two alternative bows – one a forward-sloping clipper bow, and the other being what I termed a ‘scimitar bow’ – like a vertical bow but with curvature. I presented the clipper bow first, which Amels quite liked, but then I said that if they wanted to push the envelope I’d like them to build the scimitar bow version.”

Along with the new bow shape came some other distinct styling features that drew on Heywood’s work with the late, great Jon Bannenberg, as well as Heywood’s own experience on much larger yachts.

“Big round windows are something I’ve done in the past,” he explains, “and they are something I’ve always liked as a feature. I also tried to bring my signature trademarks from the larger boats down to this scale. There’s a combination of sweeping curves in the profile of each deck partnered to sharp angles and knuckles, which is something I have not done before. The majority of my boats are very feminine, but the 199 is quite masculine.”

The majority of my boats are very feminine, but the 199 is quite masculine

Aside from looks, the increased volume in the bow area has allowed for some dramatic changes in layout and function. The tender garage has been moved to a compartment below the foredeck, meaning crew can launch and retrieve tenders and toys without disturbing guests enjoying the water at the stern, while freeing up the aft end allows for a large beach club, handily connected directly to the lower guest cabins.

The lower deck offers just three guest suites, each large and bright with extensive closet space and a generous en suite. Wide corridors and high deckheads dramatically enhance the sense of space. On the main deck, a forward master suite offers a study-cum-office, a full-width sleeping area that benefits from the two giant round ports either side, and an expansive forward, full-beam en suite. Unusually for a 60 metre, Event also offers two additional VIP cabins at bridge deck level, each with extensive horizon views.

A more formal main deck saloon is complemented by a large, separate dining room with opening glass doors to the port sidedeck and a drop-down balcony. This space also doubles as a conference room, and rather than feel isolated from the rest of the accommodation, the inviting finish and airy atmosphere positively encourages use. One deck up, the upper saloon offers a more informal space complete with exquisite games table and a grand piano, while the upper aft deck delivers an alternative, alfresco dining area.

The real treat, however, is up top. Here, the owner – through Imperial Yachts – suggested a flexible third saloon amidships in place of the open sundeck area characteristic of the rest of the Limited Editions range. The result is a fantastic, climate controlled space with full concertina glass doors aft to the lounging area and forward to the spa pool and sun pads, and which can also become a cinema thanks to a drop-down screen.

The flexible upper deck on Event is a stand-out feature

For Event’s interior design the owner chose Laura Sessa, who had worked on his previous yacht. “The owner was looking for a feeling of warmth,” Sessa explains, “so I proposed certain details in embroidery, colours and particular materials. Everything was custom made for Event.”

“Every single detail was agreed first with Imperial Yachts for the interior,” adds Julia Stewart, general director of Imperial Yachts. “Our role with the owner was really crucial during this process. He was regularly informed about each step and we consider this important process as a part of our routine work on vessels of this size.”

Event has a custom designed interior

The result is a rich but simple palette of colours, realised through careful wood selection and attention to detail. Sessa sourced fresh and brightly coloured linen and cotton fabrics from Designers Guild, Jim Thompson, Nobilis and Pierre Frey, with silk rugs from Tai Ping. Louro faia is the main black wood, bleached, stained black and lacquered to a high gloss finish, and this contrasts with paler lime tree and anigré. The master suite received special treatment, with Loro Piana fabrics and brushed and limed Oregon pine.

“Overall, we went for a look that could be described as modern classic – elegant with a lot of research into the detailing, comfort and the practicality of every room,” Laura Sessa says.

The staterooms on superyacht Event

The result is stunning, and a perfect compliment to Tim Heywood’s bold exterior lines that still turn heads wherever Event cruises. And behind it all is that collaboration between Amels and Heywood, which stretches back to the 1980s, and the drive of the owner directed through Imperial Yachts.

“Working closely with Heywood helped create the dream vessel the owner was looking for,” says Stewart. “We have a long history of award-winning projects with Amels, and with Event we strictly followed the owner’s instructions and worked with Amels to create, build and launch this iconic vessel.”

Currently offered for sale exclusively through Imperial Yachts, Event is available for viewing in Monaco.