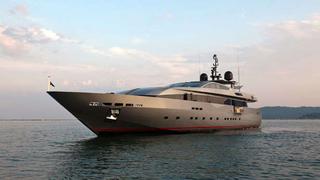 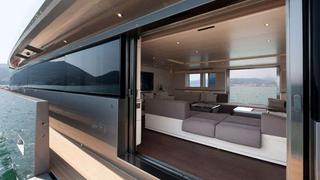 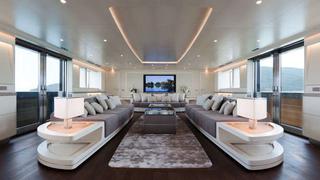 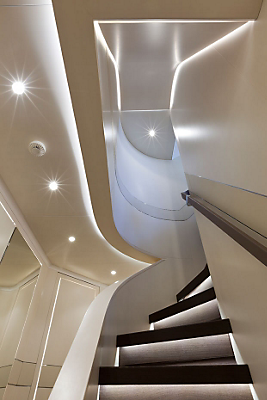 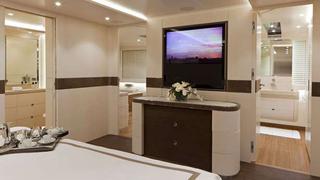 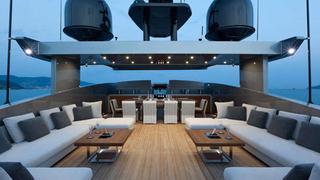 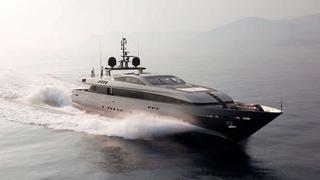 The Baglietto yard, with a history that stretches back almost 160 years, is now undergoing an important transition that celebrates its past, and informs an exciting future. Monokini, the yacht we sail in the Gulf of La Spezia a few days after her launch, traces a line between Baglietto’s history and its future, and represents an evolution of its 44-metre Fastline.

The new management of the yard believes it is necessary to look to the future, while recalling its grand history. It is not by chance that the yard also unveiled to the press a new 13 metre boat, which harkens back to the assault craft that made Baglietto an important name in the panorama of Italian military yards.

Monokini was designed and partially constructed in the period prior to the new regime and is one of the unfinished projects the Gavio Group found in the yard on arrival. The yacht’s exterior designer, Francesco Paszkowski, turned his hand to those stylistic elements and solutions that needed updating to make her more current. Yet her form has changed little and is characterised by a few balanced and decisive lines, and the windows on the main deck are a darker band that vertically interrupts the sequence of horizontal lines.

The owner was very involved in the development of the interior and the furnishings by Alberto Mancini. ‘My relationship with the owner was very close,’ recalls Mancini. ‘We saw many things together, both the important and the details, as his attention to aesthetics is very strong. I proposed things that he accepted without hesitation and this gave me energy during the design phase of the interiors. To see my ideas were appreciated gave me pleasure and, above all, helped me to appreciate his tastes and refine my proposals.’

The exterior, designed by Paszkowski, integrates very well with the interiors. ‘We tried hard to have close contact with the sea,’ continues Mancini. ‘This was the owner’s desire; he asked us to create views of the sea wherever possible. In the saloon, we did this with interesting structural solutions creating two large floor-to-ceiling openings and with the furniture – the divan that normally comprises two modules with the seats facing the centre can be reversed to face the sea.’

The main saloon can also be quickly converted to a cinema when desired. A divan was placed in the bow area below the big screen but can be easily moved to the stern to create a large U-shaped divan.

‘The owner and his wife have strong tastes, which are obvious from their precise combinations of materials and colours,’ continues Mancini. ‘They know what they want from their surrounding environment; that could seem like a complication but in reality is a great help to my work. In the themes that are repeated through the yacht, the combination of wood with natural surfaces like leather and steel stands out; three materials that give a minimalist style but with a warmth. One of the strong points of Monokini’s interiors is a minimalist rigour combined with a warm and welcoming feeling.’

Much attention was devoted to the interior lighting. Such a linear décor required particular details and the lighting served to define its forms and highlight the materials – as well as downplay some elements. ‘The solution was very complex from a construction point of view,’ continues Mancini, ‘but of great impact, because the LED lights are all inserted into recesses that allow the light to highlight the forms in some instances and disguise elements in others, for example the handles.

‘The lighting was designed with the aim of giving form. This required detailed studies and work on the panelling and certain furniture. The role played by light in the interior of the yacht is very important. The idea of using strip LEDs in the recesses produced homogenous light as if it were the materials themselves that were lit. For example, we illuminated the low parts of all the furniture, but the lights were recessed and the light source was invisible, giving a sensation of light to all the furnishing elements.’ The role of natural and artificial light aboard is clear in the entrance to the main saloon, where large windows light up the environment as well as highlighting individual elements.

The lower deck houses the cabins with the full-beam owner’s suite with two separate en suites, a separate bath, a head and walk-in wardrobe, situated amidships. No sharp corners exist between the vertical and horizontal panels, but soft curves, as if everything was one element.

Across a central corridor from the owner’s suite are the four guest cabins, two with twin beds, two with doubles and all en suite. Further forward are four crew cabins, each en suite. From here, access is available to the service area on the main deck with the galley, crew mess and the laundry. The separate areas for the crew and for the owner and guests are well planned and functional.

The bridge deck is a half deck between the main deck and the sun deck, directly linked to the latter via a central staircase. The bridge is amidships and has total control of the yacht via a complex electronics system. Large windows give good views all around, particularly towards the bow.

The sun deck is dedicated to al fresco life, offering large spaces and furniture to cater for sunbathers. Divans, tables, a bar, barbecue, reclining chairs and two tables that can be linked, all welcome options during long navigations or slow cruises.

During our cruise, we hit a top speed of 30 knots, noting Monokini’s impressive stability, as well as comprehensive insulation and vibration damping below decks; vibrations are absent even at that moment before she begins to plane.

‘It is always moving to see a new yacht in the water,’ says Paszkowski, proud designer. ‘This is also true for Monokini, whose lines largely replicate other 44-metre yachts by Baglietto. With this yacht my studio closes a long chapter and opens a new one with the yard.’

Featured in the October 2013 issue of Boat International magazine