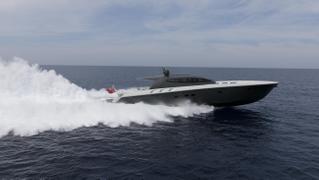 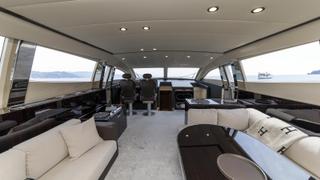 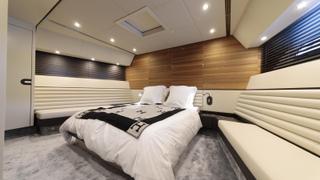 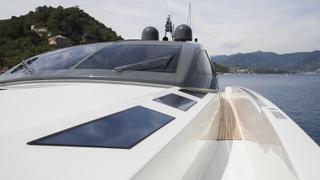 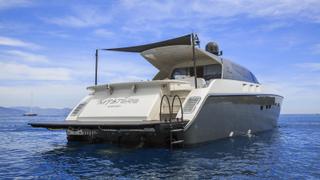 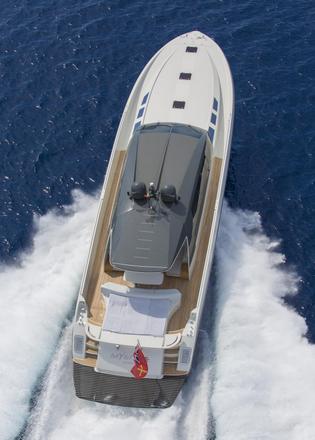 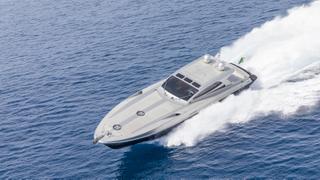 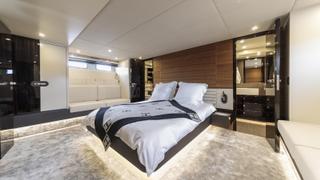 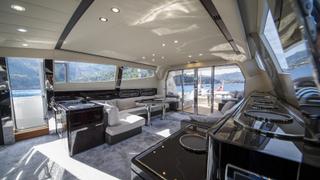 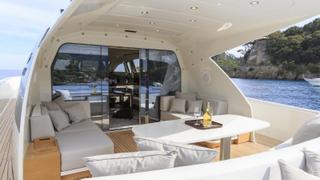 Taking a yacht up to its top speed tells you a lot about the build quality and attention to detail that went into its construction, and in the case of Mystere, the fourth Millennium 80HT yacht to emerge from Italian yard Otam, it’s a story to be proud of.

Pride is an emotion that comes up time and time again when discussing this 48-knot speedster with the yard’s effusive sales and communications manager Matteo Belardinelli, who reports that the 25.5 metre Mystere was delivered one month ahead of schedule without a single niggle or snag.

Her owner, an experienced client who had previously owned a 43 metre Northern European sailing yacht, had set exacting standards, but these were met and even surpassed by the yard’s generous approach to customisation.

“What you see here has come directly out of the owner’s mind,” Belardinelli reveals as we tour the saloon, pausing to note to matching orientation of the polished, flush-fit screw heads in the cabinetry. “The owner is a man of symmetry,” he adds with a sense of understatement.

Around 80% of Otam customers come back for more and it’s not hard to see why - Mystere’s three-cabin interior is finished to an impeccably high standard in lacquered ebony and teak with carbon fibre accents to tie in with her sporty performance and a sleek exterior by Umberto Tagliavini that gives the impression of speed even when stationary.

“We offer a technical standard that is well above average,” continues Belardinelli. “I don’t think I’m teaching you anything to say that Otam is not the cheapest brand around, but you have to be solid when you’re cruising along at 48 knots.”

The top speed is a number that he keeps coming back to and it bears repeating that this level of luxury is compatible with such hair-raising performance. That said, by Otam’s standards, Mystere isn’t all that fast. Her stablemate and immediate predecessor Mr Brown, launched back in 2012, achieved a top speed of 53 knots by virtue of four 1,622hp MTU 10V2000 engines packed into the rear and twinned to Arneson surface drives.

By comparison, Mystere’s twin 2,600hp MTU 16V2000 M94 set-up seems almost conservative, and the fruits of this decision can be seen both in the fuel consumption (560 litres per hour at 35 knots) and the size of the full-beam owner’s cabin, which has been expanded and double noise insulated, resulting in a reading of just 44db when lying at anchor with both generators and the air conditioning running at full blast.

The owner certainly put this to good use in his first season, cruising more than 20,000 nautical miles along the west coast of Italy and across to the Balearics before Mystere’s public debut at the Cannes Yachting Festival 2017.

Owner’s representative Niels Cornelsen was full of praise for the way the yard went about its business and was able to react quickly without stalling over decisions. “The relatively small management of the Otam yard results in efficient communication between the owner, his representative, the yard's point of contact and onto the shop floor,” he adds. “This counts for small detailing, but also major decisions.”

The yard’s transparency is extended to the press, with Belardinelli happily offering up the delivery contract for inspection to prove his point. Reflecting on the project, he adds, “We had a very experienced owner who chose every single detail, but also knew when not to push the boundaries. He stayed within our guidelines and this led to a result that was way above his personal expectations.”

Belardinelli admits that not all owners will appreciate such a carte blanche approach, and for that reason, Otam is happy to take a more hands-on approach in suggesting layouts and materials for future models if required.

Despite expanding its horizons recently with a 30 metre fast planing yacht and 35 metre semi-displacement design in its collection, Otam is still a highly focused operation, happy to concentrate on what it does best. As Belardinelli concludes, “We might not be the most interesting yard in terms of novelties, but what we stick to is quality and reliability” - ideals to be proud of indeed.

Clorinda: The ISA superyacht that breaks the mould