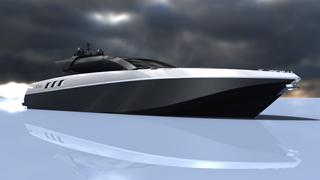 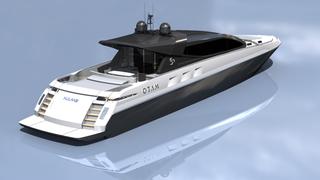 Currently in the concept stage, this new Umberto Tagliavini design was announced earlier this week at the Cannes Yachting Festival 2017 and has already attracted serious client interest.

One of the key objectives during the development of the 100HT was to ensure privacy, and this has been achieved by creating crew-specific passageways, which would allow the staff to go about their duties without disturbing the guests.

The cockpit of the Otam 100HT flows seamlessly into the maindeck saloon by way of a new sliding door system, whereby one glass panel disappears into the superstructure and another lowers into the bulkhead.

The lower-deck design allows for 80 square metres of space, which can be configured in a wide range of layouts. The yard’s preliminary GA features an amidships owner’s cabin that stretches across the full 6.63 metre beam, while the crew quarters and galley would be fitted astern of this area, providing a noise buffer against the powerful engine room.

Further forward, there is room for a VIP cabin in the bows and two twin cabins, taking the total accommodation to eight guests and four crewmembers. Key al fresco relaxation spaces include a large foredeck dining area, which can seat up to ten guests.

Power would come from a pair of 2,600hp MTU engines twinned to Arneson surface drives that should deliver the kind of exhilarating performance that the yard is renowned for, while a transom tender garage will allow the Otam 100HT to carry a 4.2 metre tender.

Other superyacht projects currently under development at the Italian yard include the second hull in the SD35 series, which is currently offered for sale with an estimated 2019 delivery date.