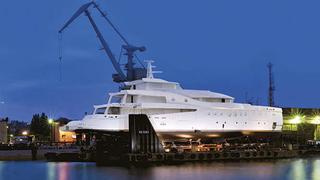 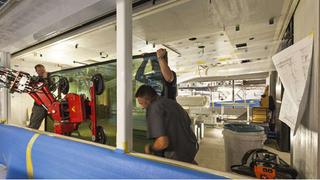 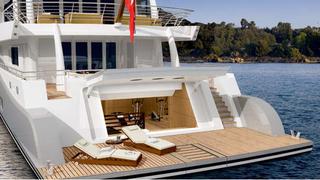 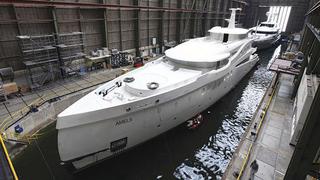 There is something extraordinary about visiting a shipyard to experience the building development of a new 60m superyacht only a few weeks away from being launched. What is apparent is the sheer size of the Amels 199, the complexity of the build, the paint finish, the guts of the interior as it takes shape and the special features that are now being transformed from mere plans into intriguing reality.

During my visit, it is clear the first Amels 199 is coming together quickly, with her helipad clearly visible at the bow, the teak decking in the process of being laid using a vacuum deck system, the exterior windows fitted, the aluminium mast atop, and the X and S band radars offset to eliminate the blind spot behind the mast.

Under the hull, two five-bladed propellers from SIP Marine have been installed – and ‘engineer’s blue’ paste used to check the fit is correct – and the new Quantum XT extending stabilisers are fitted.

At the bow is an astonishing piece of working art: from a solid piece of stainless steel, with a continuous diameter of 25 centimetres, a sprayrail has been crafted to reduce the amount of water creeping up the hull.

These are a major feature, set back into the superstructure to give the yacht a more sculpted profile. Before the fitting could take place Lloyd’s was asked to calculate exactly the pressure that would be on the frame surround and on the mullions.

Tim Heywood designed them with a radius so that the thickness of the pane does not show and the bronze tinted panes simply blend and flow.

The largest of the window units weighs in at 600kg and contains all-incorporate heat reflection and noise dampening features within the structure. Wigo, their manufacturer, designed its own robotic fitter, tall enough to fit the window units from the outside. This was the only option, as the units are so large and heavy.

‘We have a 6mm pane on the inside and an air gap and [that thinner pane] couldn’t hold the weight of the window,’ explains project manager Adriaan Roose. We had to go through the window to fit and this was a very tense moment.’

Amels has a dedicated paint manager and team, who check the preparation and work by the paint company. An industry standard Awlgrip system is used, and crucially, enough time allowed for the fillers to cure and the topcoats applied within this temperature and humidity controlled environment. It takes 12 months to paint a yacht of this size and factoring in enough time for the painter to do the job and allowing the paint and filler to cure is essential.

‘We have the advantage that we have the complete hull from the start and two weeks later the scaffolding is up, cleaned and then we start,’ says Roose. ‘What you usually see in other yards is that they have to weld something during this time, it can take months to start and you can’t put the filler on – you can’t combine hull work with painting.’

The primer is applied to the hull at a specified thickness, followed by the basic filler Awlfair, a fine filler and an intermediate coat. Lastly is the show coat.

‘This is a top coat we spray on,’ says Roose. ‘The thickness has been agreed with Imperial, which is representing the owner, so it is to a certain density. If you add another layer it adds gloss, and especially with dark colours it is essential that you build up the system. The show coat is to find imperfections.

‘All the painting is done by hand, in sections. This is a one-section hull and there is one cutting line on the bow separating port from starboard but basically this hull is done in one spray session. Most boats have a fender rail as a natural cut line but this boat doesn’t.

‘We tent the boat and make a little micro climate to work on sections. Spraying a large section of the boat with two people [doing the job] takes about two hours, but before that they spend a day tenting, cleaning and cleaning it again with a solvent: it’s a huge preparation job.’

German interior design specialist Metrica has its work cut out to get this high gloss lacquered interior, with grain running through woods, marbles and granite, matching exactly, while details such as hidden drawers add to the complexity. Detailed drawings are essential and with only a 6mm tolerance margin it has to be right.

From now on everyone has to be careful to keep the boat fully protected. Harris Grant is here to put in the entertainment system; the yard is installing the sprinkler system and the lights are connected.

Metrica’s craftsmen are hard at work surrounded by tools, spacers and fixings all beautifully arranged in their boxes. The level of engineering is such that drawings show them the exact placing of any item, down to the positioning of individual screws.

To install a custom interior Metrica builds a box and engineers the interior into it so it fits exactly to the ship’s structure. The firm manufactures all the parts in its German factory, so everything arrives at the yard in sections. They are then fitted together as far as possible before it goes on board. The ‘box-in-box’ construction takes up some space, but is also very good for sound insulation.

‘We started working with Metrica six months after the owner signed the contract – spring 2011,’ says Roose. ‘You need a full year before you can start putting things on board.’

Imperial, which is managing this project, is pleased that the build is on time for her launch in mid December, with a delivery date of May 2013.