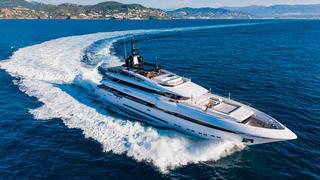 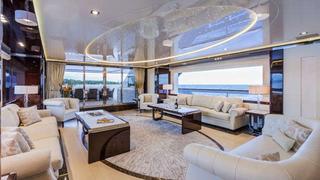 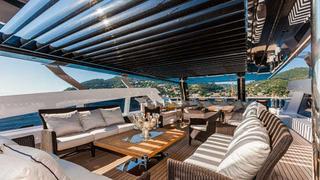 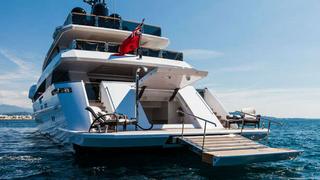 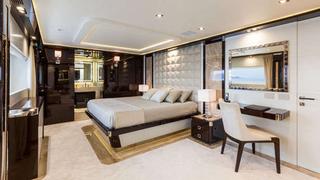 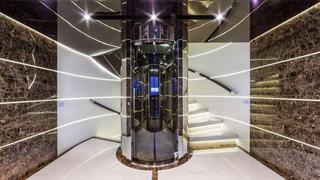 The Rossinavi saga continues with a fascinating new launch, the Prince Shark 49 metre superyacht line. As with the similarly sized Ketos Enrico Gobbi of Team for Design is responsible for the exterior styling and interior design and Guiseppe Arrabito of Arrabito Naval Architects for the naval architecture, hull design and engineering.

This time the focus was on creating a sleek, powerful, aerodynamic tri-deck yacht that would cruise at about 20 knots and remain below the key 500 GRT. The superstructure and semi-planing hull are in light aluminium, a material Rossinavi handles with great skill.

‘The Prince Shark 49 metre has been one of the most complex projects undertaken by Arrabito Naval Architects and Rossinavi,’ says Arrabito. ‘It is an optimal joint effort to reach ambitious objectives: the maximum length and dimensions possible for a tri-deck while under 500 GRT; to respect the rigidity required by MCA rules without the addition of any fixed ballast; to have notable speed and power for a yacht of these dimensions. The yacht reached 24 knots in tests powered by two 12V 4000 M93L engines of 2,580kW each and the handling was considered optimal by the owner, who already owns a yacht designed by us.’

Gobbi has worked around this performance engineering to create an emotive form encompassing the concepts of speed and power as well as volume, magnificence and opulence, all below that 500 GRT threshold. Prince Shark is his second project for Rossinavi and unites a number of his stylistic concepts, both in terms of defining the exterior style as well as the structure, styling and décor of the interior.

‘In the near future,’ he predicts, ‘the trend will be for a contemporary style characterised by a compromise between modern lines and details that recall the styles of the past. Clients are tired of the minimalist tendencies, particularly with motor yachts. I prefer by a long shot a styling enriched by unique materials that give the interiors a superior elegance and luxury and a warmer atmosphere.’

The external areas are spacious. The main aft deck features a large dining table towards the transom. Teak is used for the main features and the table, combined with glass and steel. Recessed lighting runs around the perimeter of the yacht, highlighting the deck and the architecture of the yacht. On the upper deck is a full-beam living area with a large divan; at the bow is a relaxing area and sunpads.

‘The sun deck is extremely large,’ says Valentina Speciale, in-house architect responsible for the project. ‘It covers more than 90 square metres and is organised into three areas: to the stern are sun loungers with chaises longues and a large sunbed; to the centre is a U-shaped divan with two tables that can be joined to form another large alfresco dining area, which is opposite a conversation area with three small divans and a coffee table; to the bow is the top of the staircase and an observation divan that looks forward towards the bow, as well as a bar unit. The hard top, which covers only the dining area, is equipped with a system of adjustable thin slats that can let in the sun or block it out, depending on whether you are eating or having a conversation and according to the time of day.’

‘It is a winning solution, [chosen] during construction,’ says Rossi. ‘We were considering something more closed, but up there it is more beautiful to have a system that lets in light and air in a variable manner according to the time of day, the temperature and the function of the space.’

Another interesting external feature is found on the swim platform where the centre, at more than three metres wide, can be raised or lowered to help divers and bathers enter and exit the water. There are also adjustable steps. It is a lift for all occasions, including reaching the quay or bringing aboard heavy loads – a clever mechanism created and built in-house by Rossinavi.

The interior layout was designed with the owner, who requested two large cabins, one for him and another for a key member of the family. Two master cabins of equal stature are on the main deck with four almost identical double guest cabins on the lower deck. All have touches of colour to personalise them in details like the sheets, cushions and armchair upholstery, as well as diverse marbles in the en suites. The décor is, however, mostly uniform in materials and colours, with Emperador marble on the principal floors and opaque, bleached oak for the furniture. In the cabins, the furniture in wengé contrasts with the light oak and the bedheads in light capitonné leather.

‘I don’t like different schemes that are [themselves] varied,’ says Gobbi. ‘I prefer to design one colour scheme that will be applied to all the cabin areas. In this case, the owner’s desire to personalise was resolved with delicate touches of colour, accessories, details and in the bathrooms.’

The interior features natural materials that create a chiaro-scuro (light-dark) effect, enriched by high-quality marbles. A significant focus was given to the lighting system to create effects that enhance the available space and the wellbeing of the guests with a combination of natural and artificial light.