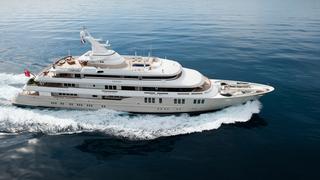 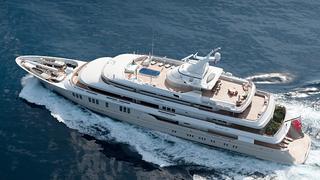 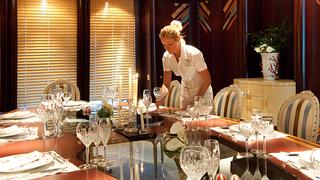 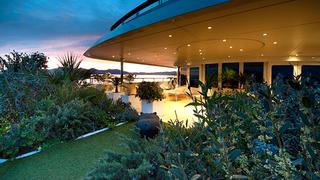 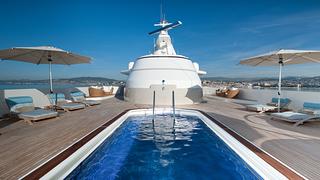 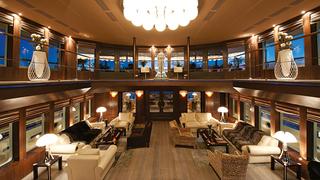 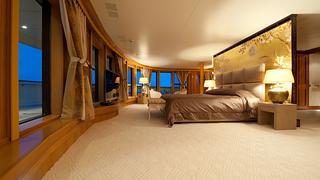 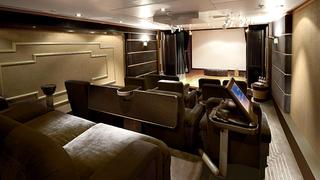 The new name of this yacht is the perfect summation: Reborn. Dutch shipyard Amels builds fine vessels and it created Boadicea faithfully in the more sedate Dutch luxury yacht style, as embellished by British designer Terry Disdale for an Australian owner. That was where Reborn started life, but now she has been transformed into a remarkably different yacht, one that reflects the emotion and experience of her new owner and the dedication and experience of the Italian yard that carried out the refit.

Boadicea was launched in 1999 for an owner who wanted to take an extended world cruise. She was designed with special emphasis on the owner’s suite and the accommodation for the crew, and among the special features was a darkroom for his photographic hobby. The style was traditional Dutch displacement yacht with a flared bow and rounded stern. After two years, the owner’s plans changed and the yacht was offered for sale.

She was bought by a Singapore-based charter business with considerable yachting experience and a vision to transform her personality and make her suitable for charter, mainly in the Mediterranean. The new owners had a clear idea of the changes they wanted to make both to the outside appearance and the interior facilities. This would be a major refit and the challenge was to accomplish it within a time-frame that would see the yacht ready for cruising within nine months of the start.

The broad scope of the changes required were laid down, and with this brief specification the owners contacted several major yards to sound out their interest. Most quoted a time-frame of two years. Only one, Amico in Genoa, would consider the schedule and so got the job.

‘We quoted on a limited amount of information from the owner, but our experience and our focus on refit work rather than mixing in new construction, enabled us to see how the programme of the refit could develop, so we felt confident of quoting and promised the required delivery time,’ says Alberto Amico, managing director of the family run yard. ‘We specialise in superyacht repair and refit work and invested heavily in facilities that give us the ability to switch resources to urgent jobs when necessary. This enables us to meet stringent deadlines.’

Apart from the tight deadline, there were many unusual features about this refit. The owners wanted to retain close control over the work, so didn’t employ a project manager other than the captain, who was on board at all times. But the captain had limited authority. Major decisions were postponed to be solved by the owners on their fortnightly visits. Still, 18 or so visits during a project represents keen owner involvement.

To maximise charter potential as well as provide for family members, the company requested special facilities: a lift travelling to all four accommodation decks and pet-friendly deck space. They planned to fit the lift in the same vertical space occupied by the central stairway, but it was discovered the central space was used as a trunk for piping and wiring, which would have to be re-routed – a major undertaking. However, by careful design, space was cleared for a three-person lift, which now looks like original equipment.

For those with pets, particularly dogs, the owners decided a garden was necessary. This is a feature of the aft end of the upper deck, where a trough containing soil and shrubs follows the rails. The owners like it so much extra tubs and plants were added, and now afternoon tea is served in what is known as the ‘tea garden deck’.

Replacing the canoe stern with a spa, open-air watersports centre and bathing platform could only be achieved by extending the hull by five metres. Now a pair of curved staircases link the bathing platform and spa entrance with the main deck.

The extension was fabricated at the yard and welded in place after removal of the original transom. It was designed so the stern gear, including rudders and propellers, could remain, but the addition of a massage room and steam bath in the lazarette meant the auxiliary machinery and steering gear located there had to be moved – more re-routing of pipework and wiring. With the whole of the top deck given over to sun worship, a small swimming pool was replaced by a much larger pool recessed into the deck.

Major changes also took place inside the yacht. The large saloon at main deck level was expanded upwards so that it includes the next level above. This meant cutting out a whole section of deck, leaving a gallery running round at the intermediate level. It is a masterpiece of design that adds a ‘wow factor’ to the saloon and makes the area the social focus on board. The décor was restyled using warm tones of walnut and leather.

The six double guest cabins in the hull are largely untouched, but significant changes have been made to the owner’s suite, which now occupies all of the forward part of the upper deck. What was a lounge at the forward end was converted into a stunning bedroom with large bed and 180-degree view through an arc of deep windows. The deck outside is a private area away from guests and crew.

The bridge deck contains the captain’s cabin and ship’s office behind the bridge, while at the rear of this deck is a lounge with a bar, television and piano. The art-deco cinema, with plush seating for 15, is midships one deck down. A total of 25 crew are accommodated in full charter mode, and there is also space for staff and a doctor’s office.

The yacht arrived at the yard in November and for a month or so was alongside while preliminary work was done. She then moved into the dry dock, where work started in earnest. Despite the scope of the work and the unexpected re-routing of services, the yacht was handed over to the owner just one week after the original due date.

‘We took on this refit mainly because it was a challenge,’ says Amico. ‘Because we focus on refit work, we have built up considerable expertise in organising refits over the years. We have a full understanding of the type of problems that we are likely to encounter, and despite the tough demands from this owner, we felt we could rise to the challenge. We have developed techniques that allow various trades to work on board at the same time without conflict, and because most of the work is done in-house, this allows us to set the priorities and reduce the time.’

Captain Luigi del Tevere says: ‘We were very pleased with the standard of work done on Reborn by Amico. A measure of their ability to do a good job was that Reborn was the first yacht to be surveyed by Isle of Man register surveyors that required no changes. When we returned after nearly a year for the guarantee work to be done, there were only a few items on the list.

‘Considering the complexity of the work and the delays while waiting for approval for the Lloyd’s surveyors for some of the work, everything went to schedule.’