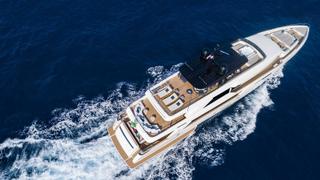 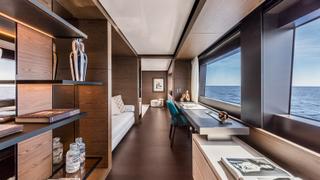 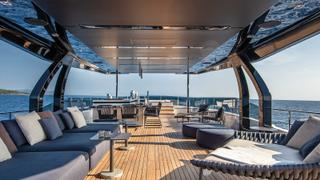 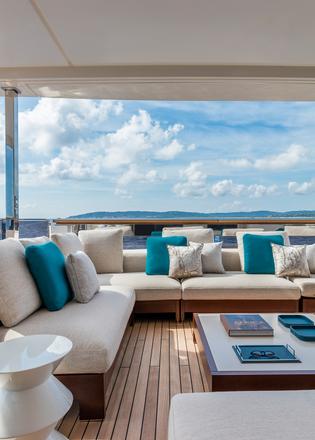 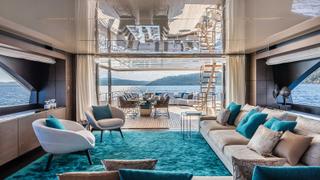 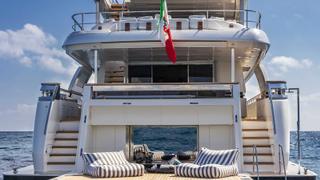 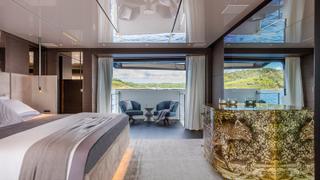 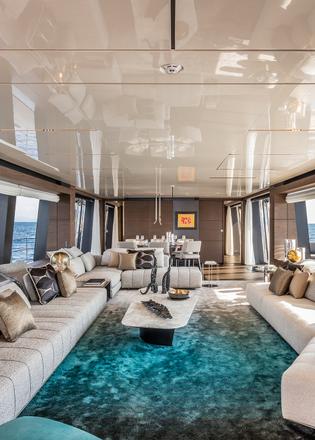 From beach club to nightclub, Custom Line has designed its Navetta 42 to be enjoyed to the full – whatever the time of day, says Clare Mahon...

Plenty of yachts pack on spaces for both day and night, ushering guests from sun-soaked beach club to pumping nightclub via a couple of flights of stairs. But fewer designs handle the transition as skilfully as the Ferretti Group’s first Custom Line Navetta 42 Four Flowers III. Its interiors are planned to guide guests to different areas at different times, creating a gentle flow through the phases of the day and making sure you’re always in the perfect spot.

The Navetta 42 is Custom Line’s current flagship and its first model with transatlantic cruising capacity. At more than 300 gross tonnes, the platform has pared down horizontal lines and a profile that expresses a strong sense of purpose. “The Custom Line Navetta series is like a family that keeps growing; the 42 is a natural evolution of the 37 and 33 that came before it,” says Bernardo Zuccon, of Zuccon International Project, who planned the yacht’s general arrangement and exterior. “Its lines are designed to stand the test of time; that’s the Zuccon design philosophy.”

Four Flowers III is the owner's third yacht built by Ferretti. All images by Alberto Cocchi.

While this Navetta is 42 metres long, it hasn’t been conceived as a standalone project. “It’s in GRP and has been designed for industrial production to satisfy the needs not of one person but of a large, heterogeneous market,” says Zuccon. “The design has to be flexible and adaptable with a general layout that offers something – the right things – to everyone.”

The Navetta 42’s exterior lines may be a constant, but the platform’s interiors can be customised with a wealth of optional features that range from finishes to fold-out terraces and engines to lifts. The choices are so many and varied that a full package of options would be practically impossible to put together on one boat. “We supply the owners with a sort of seafaring container where spaces, workflow and liveability have been planned. The owners then call in their own designers to choose optional features and to customise the furnishings as they please,” says Zuccon.

Four Flowers III, hull No 1 in this new series, was sold to an owner who is on his third yacht built by the Ferretti Group. “What was really sweet about this project was that the men in the family did it as a surprise for the women,” says Custom Line sales director Karin Paggi. “It was such a nice gesture and the men really enjoyed anticipating the women’s reaction. Personally, I was amazed that the women had so much faith in their men’s taste that they never even wanted to peek at the plans.”

Needless to say, when the yacht was finally unveiled at its launch in Ancona, a feeling of joyful surprise spread throughout the entire shipyard. Interiors architect Luca Bombassei, who knows the owner’s family well, combined walnut, dark oak, burnished steel and tinted glass for stylish, moody interiors that create a day-to-night flow through the yacht’s social areas.

On the main deck, aft deck sofas are the colour of sand and throw cushions the colour of water. In the saloon, a silky rug gradually fades from a deep aquamarine by the entrance, to a pale turquoise in the middle of the space, to sandy yellow by the dining table to reflect the changes in colour that you’d see looking from deep to shallow water. The yacht’s large glazed areas, including sliding doors that lead to symmetrical opening terraces by the dining area, are slightly tinted and add an element of drama. “We met the architect several times at his studio in Milan,” says Riccardo Menin, interior designer at the Ferretti Group. “He would tell us where he wanted to go with a certain area and we would give him our input. Luckily we agreed on practically everything, including his choice for furnishings: Minotti indoors and Roda outdoors.”

Furniture from these brands is used widely in the yacht, but the interiors never look like showrooms. “Bombassei is really good at mixing it up, adding pieces from the owner’s collections to personalise the atmosphere,” continues Menin. In fact, a large tempera painting by Francis Bacon at the main saloon entrance, an embroidered piece by Alighiero Boetti by the dining table and a sculptural floor lamp by the 20th-century Italian designer Tommaso Barbi set the tone for art and design that continues throughout the yacht. “The furniture becomes the background for these pieces,” says Menin.

Whereas structural areas on the main deck aft are all white, on the upper deck aft they are white towards the water and black towards the interior, like a day that is fading into evening or a night on the cusp of day. A large curved sofa at the stern faces a black glass table under the overhang, where up to 10 people can comfortably enjoy a meal together. The doors to the upper deck saloon can be opened completely, eliminating any physical or aesthetic boundary between the two spaces. The saloon carpeting is a solid aquamarine colour that seems to ripple depending on which direction you view the pile from, mimicking the effect of sunlight on deep water. Low sofas by Minotti and mid-century-style armchairs complete the living area and there is a small coffee table alongside open shelving used to display treasures from the owner’s collection. “The architect really wanted to create a nook in the otherwise expansive upper deck saloon,” says Menin.

“A corner for reading, playing cards or just for having a cup of coffee. He did a really good job of creating a space with bookshelves and furnishing it with a low table and seating.” The sundeck, with its black hardtop and balustrade in dark tinted glass, has a nocturnal atmosphere that makes “moondeck” seem a more appropriate name. Low modular sofas and poufs in dark grey upholstery are flanked by black cocktail tables, while semicircular lounge chairs like woven birds’ nests invite you to curl up and crash out. An informal dining area is modelled on a sushi bar and the styling is so individual that it’s almost surprising to find that sundeck staple, the spa pool with sunpads, integrated into a side of the bar.

Bombassei has transformed Four Flowers III into what feels like a club for initiated members only. But there’s also a real club aboard: the beach club that is accessed via symmetrical staircases from the aft deck and dedicated solely to sun and fun. If the social areas on board the yacht seem exclusive and almost esoteric, the cabins are all democratically finished in the same materials. The owner’s suite on the main deck is full beam with an opening terrace.

Some of the cabin’s long glazed surfaces have portholes in them, but others slide down at the touch of a button, automotive style. A dresser by the great 20th-century Italian designer Piero Fornasetti is placed in front of a floor-to-ceiling mirrored panel that conceals a TV and just beside it, picking up the dresser’s black and white tonalities, is a pen and ink drawing by Picasso. “Bombassei paid special attention to the owner’s suite,” says Menin. “He knew that he wanted to keep the television hidden and that he wanted to use some high impact pieces in the furnishings. The use of the mirrored panel solved the television problem, provided a proper backdrop for the Fornasetti piece and also made the cabin overall seem larger. It was the perfect choice,” he says.

The same materials that are used in the owner’s suite are picked up in the four guest cabins on the lower deck, alongside works from the owner’s collection of top contemporary photographers. The Navetta 42, with its functional and seaworthy platform designed by Bernardo Zuccon, could well be a yacht for travelling around the world. That platform as interpreted by Luca Bombassei becomes Four Flowers III, a yacht for rocking around the clock. With five more Navetta 42s already in the pipeline, keep an eye out for more variations on the theme in the near future.

This feature was originally published in the December 2018 issue of Boat International.

This time it's personal: Inside the design journey of 51.1 metre Heesen MySky