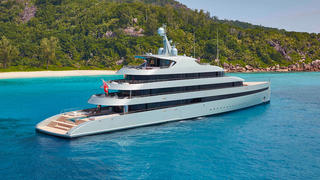 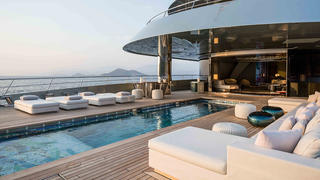 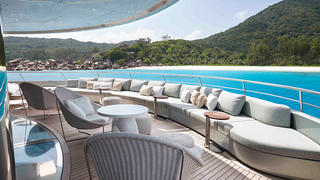 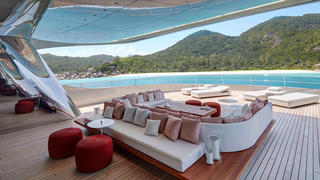 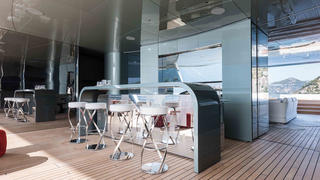 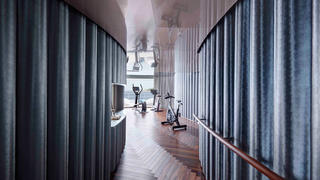 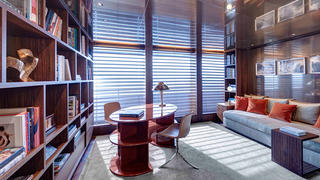 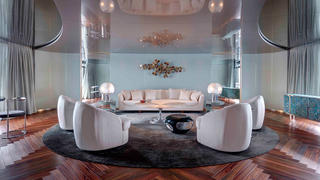 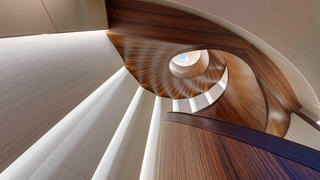 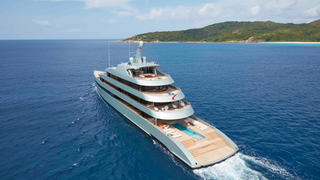 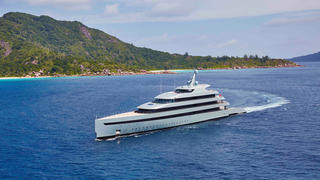 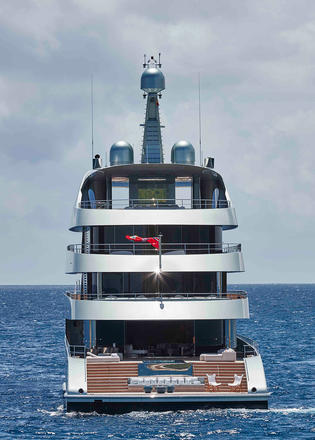 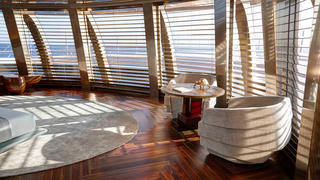 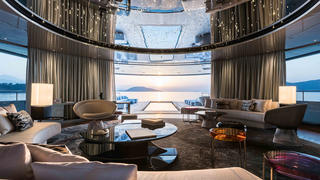 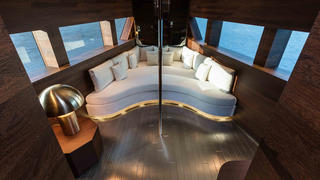 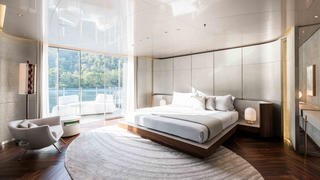 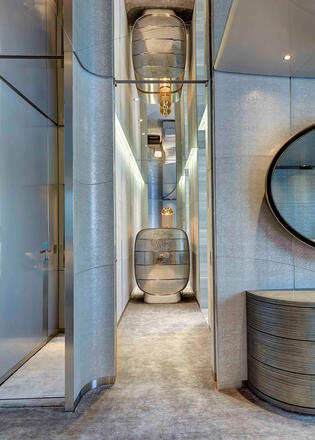 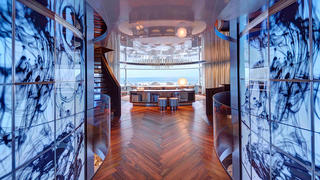 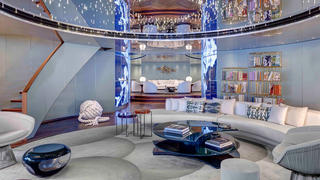 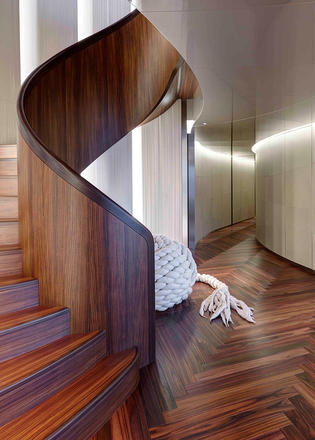 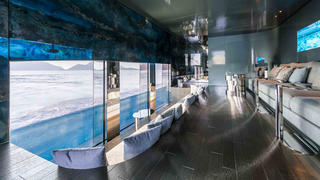 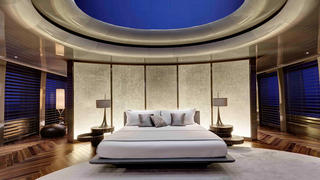 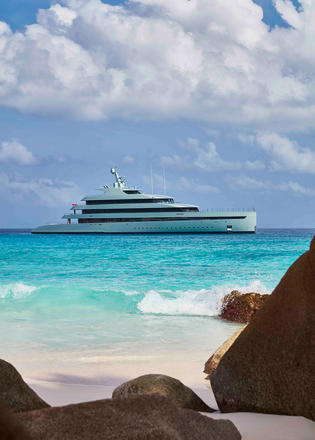 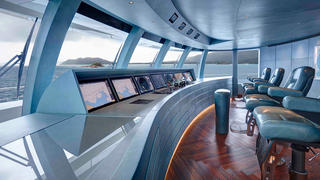 Savannah is the superyacht industry’s Ben-Hur: an awards magnet that cannot stop picking up silverware. The 83.5 metre Feadship trails the 1959 epic’s 11 Oscars, but she isn’t a million miles behind. She won three ShowBoats Design Awards in February, a World Superyacht Award for her category in May and the big one: Motor Yacht of the Year.

With a few more award ceremonies still to come, there’s a good chance Feadship will need to construct a new trophy cabinet. Move over, Charlton Heston.

Savannah was a skeleton the first time I laid eyes on her – in build at Feadship’s Aalsmeer shipyard. Build captain Ted McCumber had invited me to see the project that was codenamed Monkey Business, so-called for the inventiveness of her propulsion package and other non-traditional features.

Even when just frames, there was an unmistakable balance between volume and exterior living space. The stunning area at the stern that cascades down past a swimming pool to a bathing platform spoke volumes — this was a yacht that would be able to deliver everything without compromise.

Take a closer look at Feadship superyacht Savannah. All pictures courtesy of Feadship

The 12.5 metre beam, which in finished photographs looks proportionate, perhaps even slim from some angles, was such a tight fit through the Dutch locks and bridges on Savannah's maiden voyage that the builder wrapped her in protective film and hung sheets of plywood over the side because there wasn’t room for fenders. Savannah is a very big girl in a deceptively slender package.

But her dimensions aren’t the real highlight. Savannah features a first-of-its-kind hybrid power plant and an interior and exterior design by Cristina Gherardi Benardeau and Marcello Bozzarelli, of CG Design in Paris, working on only their second superyacht.

Originally known for designing retail spaces such as the Virgin Megastores and Kenzo shops in France, Gherardi moved into luxury brands as director of architecture worldwide for Christian Dior Couture.

She founded the Giorgio Armani Interior Design Studios in New York and Milan and worked for Armani Casa on the interior of the 49 metre Christensen motor yacht Odessa. In fact, it was the request from Odessa’s owner to design his next yacht, Savannah, that inspired her to set up her own studio in 2011.

Unconstrained by decades of immersion in yachting traditions, CG Design brought fresh eyes and curiosity to the project. Odessa’s layout had been fixed by the time Gherardi joined that project. This time she was free to work up the arrangement as per her client’s brief.

As McCumber recalls: “When we were in design meetings with De Voogt and De Vries, she would turn to me and ask if there was a ‘nautical reason’ for things — straight hallways and square rooms, for example. If we’d say no, she’d say: ‘Good, let’s do it a different way’. There was not one detail she would not spend days going over to make sure Savannah was perfect. She really pushed the yard with her design to build the best possible yacht for the owner.”

The most mind-boggling expression of this is Savannah’s main deck, which exists as an open space. The saloon is on the same level as the pool and, with the sliding curved-glass weathertight doors open and stacked invisibly out of the way, it is essentially a covered outdoor extension of the weather deck.

Guests entering via the main lobby are greeted by the smaller of the two main deck lounges and a central staircase, which is allowed to unwind lazily thanks to Savannah’s ample beam. A curved wall guides guests forward, down a corridor to five spacious suites.

Here, the walls and bedheads are gently curved at the edges, creating glamorous cocoons with wool and silk carpets, velvet upholstered bed frames and silk floor-length curtains heightening the effect.

The bedhead wall appears to stand free of the structure, creating interesting opportunities for indirect lighting. It’s a continuation of the profile of Savannah herself, with a superstructure that seems to float owing to complex visual trickery involving polished stainless steel strips, aluminium supports and teak.

Savannah’s lighting plan is one of the most sophisticated ever engineered into a yacht. CG Design worked with the highly regarded consultant Metis Lighting, of Milan, to develop the light concept and the various fixtures, some of which have up to 10 colours, lens types and positions. All of the LED indoor and outdoor strip lighting was custom made by Total Looks.

While Savannah is very bright by day, thanks to the huge amount of wall glass and skylights, at night she takes on a soft, slightly mysterious appeal. There is nothing mysterious, however, about the double-height video monitors lining the passage between the two saloons on the main deck and the catwalk connecting the saloon and dining area of the owner’s deck.

The screens can be static or flowing with changing abstract images all programmed into a computer. “It was hard work designing and implementing,” says Gherardi, “but it was worth the effort. It creates movement… a view, in a space which is normally stale.”

One of the most arresting parts of Savannah’s interior design is that, with a few deliberate exceptions, there are no visible window frames. Where there are joints in the glass that sweeps in dark bands down the sides of the main deck, they are hidden behind the construction of the cabin walls and overhead.

The glass wrapping the aft end of every deck, meanwhile, slides away to create a smooth link to Savannah’s exterior, as do the walls of the VIP and the main deck sitting room, turning these spaces into superyacht terraces with superb views.

Savannah shows how far builders and suppliers have advanced their expertise with glass. The Nemo lounge, entered from the aft deck, is the ultimate expression of this. This bonus room adds a touch of whimsy and a very cool way to connect with water while staying dry.

Its position aft, adjacent to the pool, will make it one of the most stable parts of the yacht and a great spot for watching sea life from stadium-style seating. Interestingly, it can also be a cinema with a drop-down screen covering the glass.

Savannah’s owner’s suite — or owner’s deck really — begins with a spacious outdoor seating area of scattered and built-in furniture and ends with a broad helicopter deck. In between are a dining room, saloon, service pantry, office and a separate dressing area, large marble bathroom and the bedroom proper under an enormous skylight. Pantograph doors at various locations allow deck access.

The owner’s suite is one of Gherardi’s favourites. “I am very fond of its architecture. The double mullions in a metallic finish, the circular space and the large skylight… it is very impressive.”

Stainless steel is used to great effect in bold polished columns and furniture throughout Savannah. On the superyacht sundeck, the exhaust columns have been made into works of art that transition through the hardtop and exit as two pairs of twin funnels.

Elsewhere, the metallic theme continues in the painted surfaces. Savannah is the first superyacht to be given a complete metallic finish. Even the undersides of the exterior decks are painted Sea Foam metallic green.

Feadship developed a special spray nozzle technique to accomplish the look, which had to be achieved in one “sweep” to avoid colour discrepancy. Two teams of six painters began at Savannah’s stern and moved up and down each side until they met at the bow in a carefully co-ordinated ballet.

One clogged spray gun would have spoiled the seamless flow and there was no option for replenishing batches of paint between decks. It wasn’t the advanced hybrid propulsion system that worried McCumber but Savannah’s metallic paint, both its application and durability. One year in, he notes, it’s all good.

In her first year, Savannah cruised 14,000 nautical miles and the captain reports that it went without a hitch. “The boat is very stable in all conditions and rides like a dream in head seas with the plumb bow. I was a bit concerned with the open transom in following seas but this has not been a problem at all. The boat’s hull shape is so efficient we barely make a wake.”

In fact, tank tests showed Savannah is seven or eight per cent more efficient than other displacement hulls the same length with standard twin-shaft propulsion.

It’s not only the hull that’s efficient, but also the hybrid propulsion system that gives Savannah five modes of operation. This flexibility in operation, and in loading, results in reduced emissions and “fuel savings of some 30 per cent compared to the best boats we have launched to date”, says Feadship director Henk de Vries.

The yacht blends a main diesel engine geared to a shaft turning a huge variable pitch propeller with three gensets, a megawatt of storage batteries and an azimuthing thruster. While there are some Japanese passenger ships that use this method, Savannah is the first yacht to operate with a single azipull running in the slipstream of a variable pitch propeller.

This creates the increased efficiency of a contra-rotating propeller to cancel rotational loss, just like high-performance outboards. Each bank of the Corvus 1,000kWh batteries has a management program, and a computer regulates which ones to charge and how much. Rolls-Royce and Imtech Marine controllers match the power generation to the speed and hotel load requirements.

“The yacht did push a lot of boundaries but Feadship would not have built it were they not 100 per cent sure it was going to work,” says McCumber. “Everything that is on Savannah has been done before, but never all in one vessel, and this is what makes her so special.”