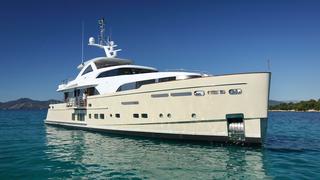 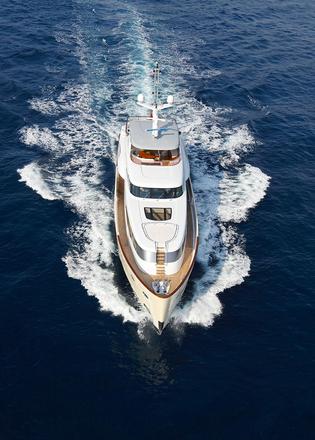 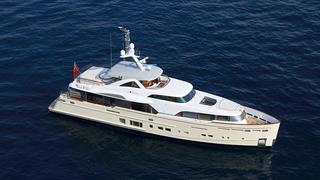 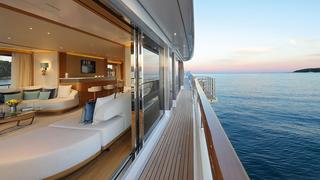 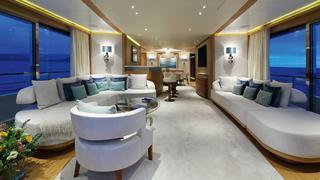 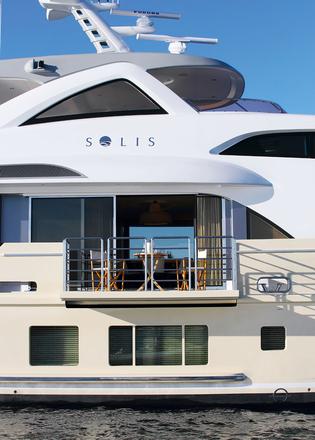 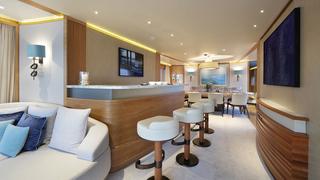 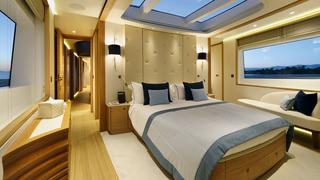 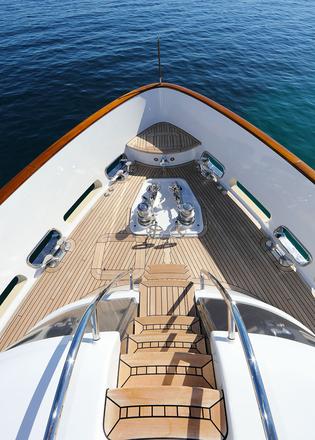 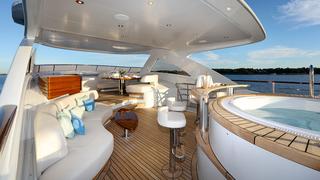 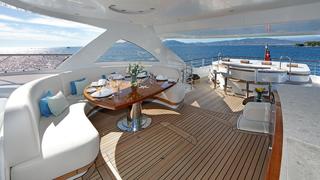 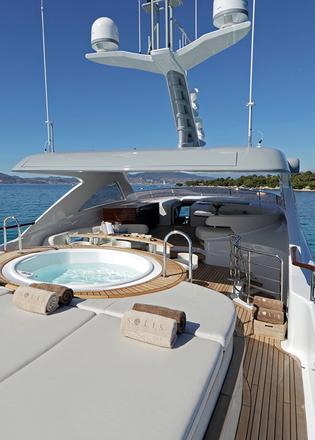 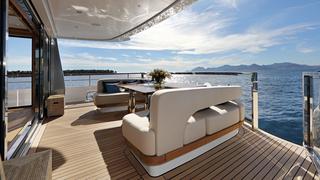 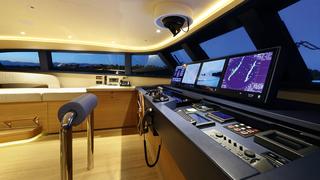 Small, family-owned shipyards have their own particular charm, especially in the Netherlands where yacht building traditions run deep. Mulder Shipyard, founded in 1938, is just such a place.

At one of its facilities, in Voorschoten not far from The Hague, ducks waddle out of a canal when the craftsmen take out their packed lunches on sunny days, a ritual set in motion by the sound of the lunchtime horn.

Mulder is also a growing business. In 2009 it delivered its largest custom boat to date, the 23.7 metre Eleonore that was inspired by classic Dutch motor yachts, and in 2010 the 28 metre Mimi became its flagship. At the time, managing director Dirk Mulder had the drawings for a larger, modern facility on his office walls.

Post recession, when almost everyone else was battening down the hatches, Mulder decided to go ahead with the expansion, breaking ground on his new yard in early 2011. By the spring of 2013, the new facility on the Old Rhine in Zoeterwoude-Rijndijk, South Holland, which includes two building sheds and drydocks for yachts of up to 45 metres, was operational.

This blend, of the family-owned business with a reputation for quality and its spotless new facility with efficiency built in, helped earn Mulder the contract to build its largest vessel to date, the 34 metre, 315 gross ton Solis.

The yacht’s owners, who are all siblings, asked their broker for recommendations on where to build their yacht. International Yacht Register broker William Molloy and Stephen White, project manager and IYR’s CEO, visited several northern European yards on behalf of their clients. Ultimately Mulder came out on top thanks to its set-up and ability to meet the aggressive delivery schedule.

“What made a big difference was that our yard is brand new,” says Mulder. “They could see we have invested and that we had confidence in the future. We made the right decision [by expanding]. In the end it [Solis] was a decision based on quality, price and delivery time.”

“We were very impressed straight away with the yard,” says Molloy. “They do their own wood and steel work, and the way they do it shows plain Dutch efficiency.” Indeed, Mulder subcontracts hulls and superstructures to other Dutch yards but does everything else in-house, from the metalwork, polished to a jewel-like finish, to the impeccable joinery. A full floor is dedicated to woodwork and the interior is built outside of the hull.

For design, the owners went to James Claydon and Mike Reeves, who established their studio, the Lymington, UK-based Claydon Reeves, in 2010, with many years of experience between them. They came up with the design for an unconventional looking full-displacement yacht with a raised pilothouse and near plumb bow that combines a modern edge with classic details. The yacht eventually grew by a few metres, as projects tend to do.

The joining of hull and superstructure for BN100 (Solis’s yard number) in July 2014 was cause for celebration and the Mulder craftsmen marked the occasion with a barbecue. The yard’s family feel meshed well with the owners’ philosophy. Their goal was to build a harmonious, modern and human-size family yacht.

By the Monaco Yacht Show last autumn, she was finished and docked stern-to, revealing an impressive transom of cascading stairs that conceal the lazarette. In an empty slip to her starboard side, one of her great attributes, the fold-down balcony at the saloon level, lay open.

Light-filled, thanks to large windows and strategically placed skylights, the interior is reminiscent of the best European spas, with lots of wood and natural stone. After the heat and crowds on the dock, Solis and her honey-toned interior, soft, sound-absorbing carpets and high ceilings, offers a peaceful retreat.

The routes through the vessel — for example, from the aft deck to the saloon/dining area and forward to one of two VIP cabins, or down to the lower deck accommodation — offer few angles and no loud colours. Details, such as stitched leather louvres, are impeccably realised and lighting is placed to emphasise architectural features. Pictures of animals, plants and a portrait of an unadorned Brigitte Bardot are the only embellishments on the simple background.

One of the owners had the job of choosing the art. “I wanted to find pieces that were harmonious but from different disciplines; some photos, some commissioned pieces,” she says. “They echo the feel and the colours on the boat and her environment but they are also playful. For instance, in one of the cabins, there is a fun photo of dogs swimming. The children will like it but it’s also meant to remind adults to keep a childlike wonder.”

As for the picture of Bardot, she says: “I always liked this image. Brigitte Bardot, like us, has great empathy for nature and animals. She is also playful in this photo and emerging from a boat. I thought it was perfect and I was happy that my siblings agreed.”

The light-filled main saloon has its own fold-down balcony

The interior shows how well Claydon Reeves translated the desires of the owners, who conceived Solis (which is Latin for sun or sunlight) as a kind of anti-superyacht. In some ways it feels more like the interior of a sailing yacht than a conventional motor yacht. “[Solis] is a human boating experience,” says Molloy, who sums up her key features as being “leisure, respect for nature, well-being, luxury without ostentation”.

They approach design from an architectural point of view and find inspiration in natural forms, which is evident on this yacht, even if Solis also mirrors the clients’ wishes. The family was intimately involved in the design, entrusting White, from IYR, with all technical aspects.

"The furniture pieces, like the corridors themselves, are curved. The coffee tables are abstract, marine-inspired forms and even the beds are devoid of sharp angles"

“Our boat has been thought of as a source of energy, joy, balance and unity for all her guests,” say the owners. “It is meant to be a bridge between water and sky, the elements, the inside and the outside. Indeed everything is inter-related. All circulations have been thought of as flowing like water and make you feel relaxed and at home. All Solis’s shapes have been inspired by forms found in nature.”

Instead of using a variety of materials, the designers used oak primarily, treating it with different finishes and using the grain in various directions for subtle contrast. The furniture pieces, like the corridors themselves, are curved. The coffee tables are abstract marine-inspired forms and even the beds are devoid of sharp angles.

The fabrics, paints and marbles are sand- and water-coloured, while, on the lower deck, murals in bronze and resin convey the feeling of swimming among a school of fish.

Solis's sun deck features an intimate dining area forward and a spa pool with spacious sun pads aft. Flexibility is such that the space can be cleared to allow yoga sessions on deck, while a running machine is hidden beneath the decking for exercise

Just as sinuous as the design details are the solutions the designers adopted to make the spaces versatile on this modestly sized yacht. The top deck is split into two distinct areas: forward, there is a cosy dining area and in the aft part are sunpads and a spa pool.

Part of the pool’s wooden surround can be adjusted to create a bar, which can be accessed from the water or from the other side where there are stools. With these removed this deck area is a perfect space for yoga sessions and there is also a running machine hidden below the decking.

The aft deck one level below is another flexible space. “The sofas here convert into a large sunlounger, creating a split-level external beach club with direct contact with the sea. Large terrace doors connect the space with the interior and effectively create one large sea lounge,” says Reeves.

Practicality is built in with the raised pilothouse design. The crew of up to seven enjoys comfortable quarters, with a mess and cabins built to the new LY3’s roomy standards. “The crew spends more time on board than we do, so we wanted them to be comfortable,” say the owners.

The designers worked on 15 iterations of the crew area to maximise their space, says Reeves. They can circulate quickly and discreetly through a corridor that runs alongside and beneath the raised bridge on the port side.

The bridge itself has an inviting sofa for guests to watch navigation and the extra height at which it is placed has added benefits. “We were able to give the crew a lovely pantry,” says Reeves. The pantry is connected to the main deck by a discreet door.

Even the diesel engines are consistent with the overall theme. The compact footprint of the two modestly powered Caterpillar C18s allowed more space for accommodation. “We wanted a boat that is stable, comfortable and that would not pollute too much. We chose stability and comfort over speed,” the owners say.

The displacement yacht, which features naval architecture by Van Oossanen, has a top speed of 13 knots and a transatlantic range. Accordingly, the owners are planning trips to diverse locations, from the Mediterranean to the Caribbean and the Norwegian fjords. In the Caribbean, they are thinking of sharing Solis with others and are considering a charter programme.

“Solis was a successful project that has been a pleasure to be associated with,” says White. Mulder has since begun another collaboration with Claydon Reeves, on a second and larger yacht. It seems that Solis may be starting a family of her own.

All photos courtesy of Thierry Ameller

Rock.It — the hip, modern Feadship yacht with a touch of class