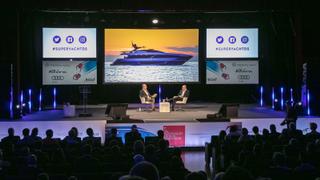 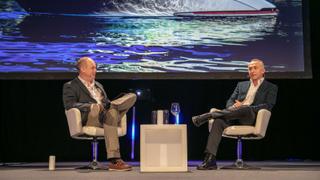 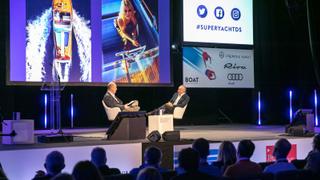 To most, a Riva is a classic mahogany runabout spotted on the Italian Riviera and a symbol of sixties glamour. But as Riva introduces a new range of steel superyachts, how do you retain the magic of such a historic brand while continuing to move forward? According to Ferretti Group CEO Alberto Galassi the key is to go back to basics. Galassi sat down with Boat International editor Stewart Campbell at the Superyacht Design Festival to discuss the new generation of Riva...

For Galassi, Riva was the selling point of the Ferretti Group when he joined as CEO in 2014. But it was in need of a revival. “When I joined, the brand was under a little bit of dust", he said. "The fleet was fantastic - some boats like the Aquariva were so iconic and didn't need to change - but it needed a new product range. People change and styles change but you have to be able to attract new customers while keeping to the basics." He believed this was fundamental in maintaining customer interest in the brand.

In the past four years Riva has launched 11 new models, including the 110 Dolce Vita last year and the Riva 100 Corsaro in 2017, while its biggest yacht to-date is currently under construction in Ancona, Italy.

The Riva 50MT is due to launch in June 2019 and will become the brand's new flagship. Announced at the 2015 Monaco Yacht Show, this 50 metre steel yacht will be first born of the new Riva Superyachts Division and was designed by Officina Italiana Design with CRN developing the naval architecture.

Galassi explained the biggest inspiration behind the Riva 50MT was Carlo Riva himself. “When I was appointed CEO I went to Carlo Riva and said, 'What do you think we should we do with this brand?' He said to go back to basics. He said, 'Go back to the origins of Riva, make it nice, and go back to steel.' I said 'Steel?' He said 'Alberto, now in Italy we have the best shipyards so we can do it, we can compete. Bring it back and make it sail.'"

For Galassi, it was important that new yachts would retain the DNA that makes them recognisably Riva. “Take Ferraris, for example, Ferraris of today are completely different to the Ferraris of the sixties, but they always keep some familiar details”. The Riva 50MT is reminiscent of classic Carlo Riva motor yachts, inspired by the Carvelle line from the 1960s and 70s, but it's the Mahogany detail in the interior that keeps that Riva familiarity.

Alberto Galassi said the 50MT has "a standard of quality higher than any other production we have with new levels of finishing and detailing, and higher costs in terms of the materials used. The style is very classic and very different. It doesn’t look like anything we’ve seen so far.”

The Riva 50MT, however, is just the first step in Riva’s expansion into bigger yachts. The Riva Superyacht Divison will offer two different lines in three sizes: 50 metres, 70 metres and 90 metres. The first line draws on inspiration from Carlo Riva's 1960s classics, while the second line will be characterised by a “sporty” feel.

The 2020 Superyacht Design Festival will take place from February 2-4 2020 in Cortina d'Ampezzo, bringing together the biggest names in superyacht design and world-famous speakers for two days of thought-provoking discussion. The event is accompanied by an exciting social programme, including the Mountain Lodge Party and legendary Ski Cup. Riva will return in 2020 as a headline sponsor of the Superyacht Design Festival.