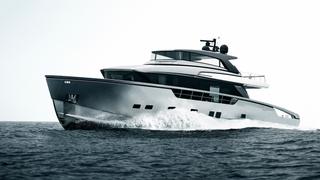 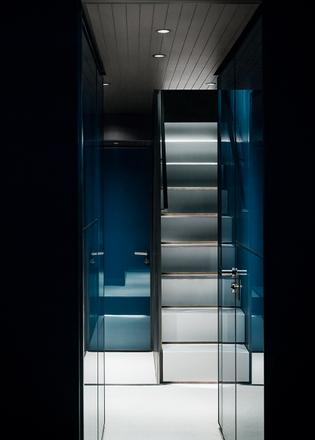 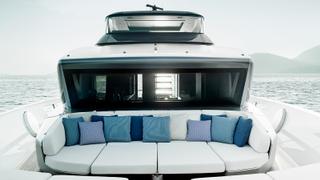 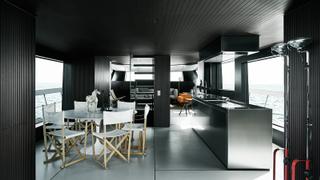 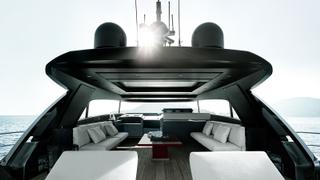 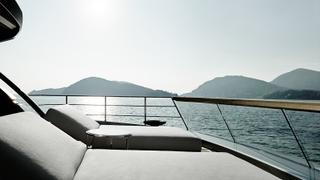 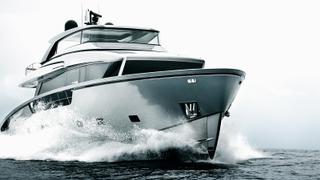 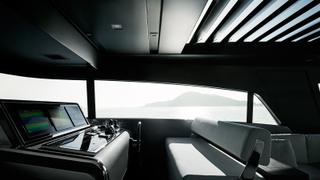 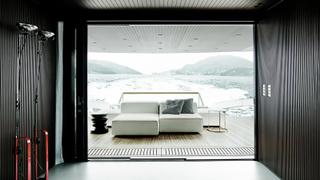 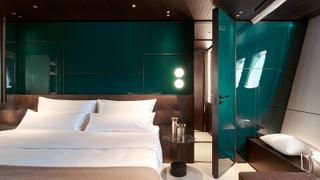 It’s a brave shipyard that diverts from a winning formula. Sanlorenzo’s semi-custom SL and SD lines are so entrenched that they keep the yard near the top of global build tables year after year.

The company, which turns 60 in 2018, could have kept tweaking the models by degrees to suit the market mood, but instead it has taken everyone by surprise with a bold grab for a brand new slice of the semi-custom market. In doing so it has come up with a product that is truly refreshing, something that changes the conversation. You have to say: hats off.

From first glance, the brand new SX88 is immediately unlike any Sanlorenzo that precedes it. The superstructure is original and muscular. The reverse windscreen has a hint of trawler about it. Behind, the lines by Officina Italiana Design swoop back to a long, low, teak-clad stern used for storing tenders and toys that can be quickly cleared using a hidden davit to provide a superb water-level beach club.

There has been just as much innovation inside the boat. Sanlorenzo gave architect and interior designer Piero Lissoni something close to carte blanche. The result is breathtaking — whether you love it or loathe it. He has stripped out almost every established element from the main deck and turned it into one open space, bordered by near floor-to-ceiling windows, with only slim mullions interrupting the view.

“I wondered ‘why are there so many strange spaces on a boat?’” explains Lissoni. “I never understood why people who use boats accept something so vulgar. I wanted the interior like a loft. In architectural terms, a loft is a beautiful space, without frames and corridors.”

The master cabin? Down below. Nav station? Upstairs. Galley? That’s the floating unit at the side, which can be extended or moved as necessary. Sofas, tables and other furniture? It’s all free-standing and can be rearranged at will. All that’s left to encroach on this open space is the staircase up to the flybridge — a cantilevered structure that almost appears to float.

That flybridge, therefore, becomes the nerve centre of the boat. Built from carbon to save weight, its huge wraparound vertical window can be lowered for ventilation, or raised for climate control. It’s an engineering tour de force, and much of it owes its genesis to Olympic sailor turned boat builder Luca Santella.

The SX88 had its first outing at the 2017 Cannes Yachting Festival, the culmination of many years’ work. Santella had sensed a market for a big boat with an open arrangement and good access to the water after feedback from clients for his own brand of 9 to 13 metre motor yachts.

His company, Bluegame, fell victim to the financial crisis in 2013 but, as he says: “I closed my business, but I didn’t close my mind.” The germ of the idea sprouted and in 2014 he felt ready to present the concept to Massimo Perotti, the owner of Sanlorenzo.

“It was the moment at which the pleasure yachting business restarted its positive trend after the 2008 crisis,” explains Perotti. “The market went through a radical change and only experienced, passionate and true sea lovers remained as players. I truly believed that this new concept of boat and boating could match very well the new market trend expectations.”

Reception was cautious at first, and development slow. But as the yard made contact with potential buyers of the new boat, dubbed “X” for crossover, it became clear that there was significant interest. “Mr Perotti immediately understood that there was real possibility here,” Santella says. Before the first boat was complete, 11 units had been sold — not bad going for an unproven design with a €5 million-plus price tag.

The story of the SX88 is one of overcoming technical hurdles. There was so much in this project that Sanlorenzo had never done before that it presented a steep learning curve. It took all the energy of Santella and his team to drive it on. To start with, he envisioned a new style of hull and signed up veteran American naval architect Lou Codega to deliver it.

Something between displacement and planing, the SX88 carries one marked chine all the way aft and a second one back amidships. From the outset, Santella had a top speed of 23 knots in mind and throughout the design process he defended this target — “17 or 18 knots is fine most of the time but, like a car, it’s good to have that extra speed if you need it,” he says.

The footprint of the boat at the waterline is sleeker than most, with the widest beam in the last third of the hull. There are not two but three Volvo Penta IPS 1050 diesel engines, each unit delivering 800hp through twin propellers on a fully rotating pod. The boat is supremely manoeuvrable, without the need for rudders or thrusters. “It is the first time Sanlorenzo has experimented with this technology,” Santella adds.

His team ran the calculations for hull speed and trim a hundred times, but they wanted external verification. They took a scale model for tank testing in the Netherlands, which yielded proof that the hull calculations were correct. The result is a yacht with a range of 1,000 nautical miles at 12 knots and 600 to 700 nautical miles at full speed. “She can sail at night like a semi-displacement yacht,” Santella explains. “This gives the boat another appeal: she can go nearly anywhere.”

It was key to the design that sole control of the boat be moved to a flybridge nav station, freeing up space on the main deck. “Technically, it was very difficult,” Santella says, “but it rewarded us with a huge opportunity to give the client a boat with two personalities: open plan with the master cabin below, or a more traditional layout.”

The biggest challenge with the flybridge was to make it comfortable to use in hot and cold weather. The solution was a giant hydraulically controlled window. “Like in a car, except that this window is three metres long with curves,” he says. The view from the navigator’s seat offers a 270 degree connection to the water. “The windows are so big, all you can see is water – it’s like being outside,” Santella adds.

In line with the vision for the main deck, the flybridge is a very open space, running out onto an area of open decking suitable for loungers or a table. Lissoni’s sofas in light grey linen line each side of the covered area, with a gleaming red table in the middle that can be raised and lowered. A glass balustrade gives the deck the appearance of merging with the sea. When it’s time to switch on the air con, a louvre built into the hardtop can be closed, and a transparent plastic curtain divides the inside from outside.

A key part of Santella’s vision was that large open aft deck, which he wanted close to the waterline to enhance the connection to the sea. In beach club mode, a 4.6 square metre section lowers into the water and an integrated staircase adjusts to the chosen depth. It provides a great spot for the family to play, and for berthing the tender and toys between outings.

But this area has a dual personality too. There is enough space to store a 4.45 metre Williams Dieseljet, as well as a couple of Jet Skis. The idea came late, but Santella’s team realised after the hull was in the mould that they might be able to disguise the launching crane within the plunging curve of the handrail. It took a lot of design work, but the solution is neat: the rail on the port quarter is indistinguishable from that to starboard, but a three metre section of it is mounted on a huge bearing, and is capable of swinging a tonne through 270 degrees.

By concentrating storage at the stern, the bow is left free as another relaxing space. All the gleaming stainless steel for launching and recovering the anchor and mooring lines is hidden in a deep locker. The locker lid can be covered with cushions to provide ample sunbathing, or you can retreat to a U-shaped sofa in the shade of those raked windows, where another lowering table creates a huge lounger.

The big windows have so far meant that access to the bow is possible only via the side decks. But that is about to change. Sanlorenzo’s team has found a way to engineer a forward exit, the top swinging up and the bottom swinging out. Santella calls it “a technical headache”, but expect to see this feature on an addition to the SX range — a yacht of well over 30 metres LOA, which is still on the drawing board.

An SX76 is likely to hit the water first, and has already pre-sold half a dozen units. “The SX project was so particular in its characteristics that we immediately decided to design a complete range around it,” says Perotti.

Being a largely customisable yacht, the finish inside is a matter of personal taste. Lissoni’s vision is all dark wenge panelling, long, low-slung sofas and natural fabrics in grey and orange. His galley unit is in brushed stainless steel by Italian firm Boffi, while the four cabins on the lower deck are en suite, with shower rooms clad in Carrara marble.

The master cabin aft runs the full beam of the SX88, with walls in gleaming green glass panels. In the VIP cabin, the bed lies athwartships and the glass panelling switches to blue, as it is in the twin cabin and the single (with Pullman).

His design has certainly created the wow factor, but for those with more conservative tastes, Sanlorenzo has produced its own alternative visions in light oak and lacquered wood, with the main deck split into an enclosed dining space and separate relaxing space. But as Santella himself says: “With the SX, the boat is already giving so much; there’s no need to go even further with the interior design.”

The owner can also choose to put the master cabin below, or on the main deck, where it can take advantage of the light that floods in through the forward windows.

Even without the Lissoni interior, this is an exciting, innovative yacht. The average age of owners is already much lower than the mid-50s of Sanlorenzo’s other lines, and it’s not hard to see why. “We believe that the SX line will bring Sanlorenzo a new and younger clientele,” says Perotti. “For sure there will be many copies of it by our competitors in the coming years.”

And if that happens — if the SX range becomes a genre — you will know that Sanlorenzo’s bold decision has paid off and set the company on a course for its next 60 years.